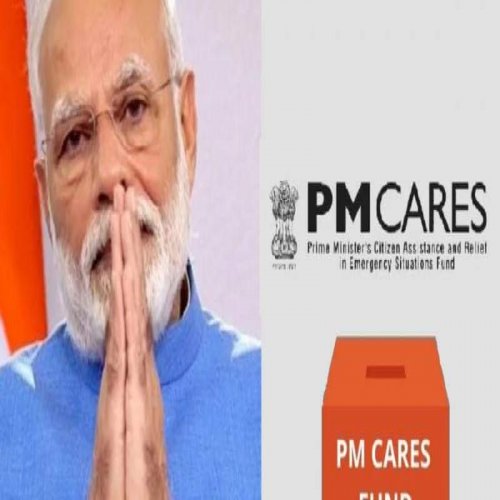 The outbreak of COVID-19 saw Narendra Modi, launch the Prime Minister’s Citizen Assistance and Relief in Emergency Situations Fund (PM-Cares) on March 28. #KhabarLive attempts to answer the widely asked question: Why a new fund when we already have the Prime Minister’s National Relief Fund?

The PMNRF was instituted in 1948 by Jawaharlal Nehru and any individual or institution can donate to this forum. While contributions from budgetary sources or from the balance sheets of public sector undertakings are not accepted, PMNRF has been accepting foreign funds since 2011.

In the financial year 2018-19 the PMNRF received 534.22 crore rupees, of which 212 crores were spent. The audit report shows that as of December 16 last year the corpus had about 3,800 crores unspent, which is higher for instance than what the Tamil Nadu government had allocated for corona relief actions as of May 12.

Given that donations to the PMNRF are fully tax exempt under Section 80G of the Income Tax Act, the mystery around PM-Cares gets curiouser.

On the face of it, donations to PM-Cares are also fully tax exempt and corporate donations to it will be counted as corporate social responsibility (CSR) spending. CSR is a statutory contribution wherein eligible corporates must spend 2% of the average profits earned in the last three financial years for scheduled activities towards social welfare.

From April 1, 2014 CSR became mandatory in India. Corporates can spend the stipulated CSR funds by forming a new trust or through an existing trust, or by donating to private trusts or agencies. Contributing to government funds and schemes is also permitted.

A total of 16,000 companies have been registered under CSR in India, as per a report by CSRBOX. A sum total of 1.03 trillion (lakh crore) rupees was the stipulated amount of money to be spent under CSR norms by Indian corporates in the first five years since CSR became mandatory. But only 69,800 crores have been spent, and 33,200 crores lie unspent.

Moreover, the CSRBOX audit shows that the highest spending through the CSR route has been towards healthcare, amounting to 9,020 crores in five years.

Of the 69,800 crores spent through CSR, public sector undertakings at state and Centre have contributed a sizeable amount. Over 152 Maharatna Companies (highly profitable and significant PSUs) qualify for CSR. These 152 PSUs had spent 12,842 crores in 5 years, i.e. nearly a fifth of the total expenditure.

However, this amount is only around half of what PSUs are required to spend under CSR. Most of the PSUs are not spending their stipulated CSR fund completely. ONGC for example allocated 2,017 crores as its CSR fund for the financial year 2017-18, of which it spent only 503 crores or a quarter.

For PSUs, the total stipulated amount of money to be spent under CSR stands at around 30,000 crores, which is 30% of the total CSR allocation in India for mandatory years.

On the other hand, out of 16,000 registered CSR companies, 71% are ‘small corporates’ whose stipulated CSR contribution is around 50 lakh rupees. ‘Big corporates’ which are required to spend more than 10 crores are just 1.35% of total registered companies, or around 200–250 companies (including large PSUs) based on their profits.

The privately owned component of these ‘big corporates’ stands at around 180–200 companies in India, which had spent about 25,000 crores through CSR in five years.

Given that corporates can count donations to PM-Cares as CSR, the move comes off as an opportunity to tap the pool of unspent money.

On an anti-federal note, while donations to PM-Cares fall under the ambit of CSR, corporate donations to the Chief Minister Relief Funds do not count as CSR expenditure. By way of assuaging state government concerns, donations to the State Disaster Response Funds were included in the purview of CSR.

However, as observed in the case of Tamil Nadu, the State Disaster Management website directs donors to the CM Relief Fund, which complicates the matrix, as there is no direct fund-collecting provision under the State Disaster Response Fund. It is not clear if such a donation will be considered CSR spending or not.

Subsequently, even after the Tamil Nadu government announced that donations to the CM Relief Fund would be transferred to the State Disaster Management Authority to enable CSR eligibility, some auditors expressed technical difficulties over the move.

Why can’t the central government include CM Relief Fund donations within CSR?

In public debates BJP spokespersons have said that the 2013 amendment to the Companies Act brought by the UPA–2 government is the barrier. But in truth, as per the amendment, donations to CM Relief Funds within the mandatory CSR spending limit (2% of three years’ average profit) do not count, but if a company spends more on CSR than required, donations can be claimed as CSR spending.

Since the recent donations by most of the registered companies go beyond the stipulated minimum, why is the Centre not encouraging these companies to contribute to CM Relief Funds?

In October 2014 the Union Ministry of Corporate Affairs announced through a notification that donations to the Swacch Bharath and Namami Gange Schemes could be claimed as CSR spending within stipulated minimum. Through this simple move the Swacch Bharath dry-latrine building initiative received 835 crores through the CSR route in four years.

Even an ordinance amending the Companies Act could go a long way in helping the cash starved states.

This is a matter of concern as the Centre wishes to change the CSR provisions completely: it has already initiated public hearings on the issue amidst the national lockdown. Earlier amendments brought in 2019 are on hold and have not implemented to date.

The PM-Cares fund received 6,500 crores in just one week, mostly from big corporates and rich individuals. This amount is close to 25% of what big corporates have spent through CSR since 2014. Across those 220 weeks, the PMNRF had received just 757 crores through the CSR route, just one-tenth of what PM-Cares received in a single week, although India has faced many other natural calamities in this period.

On May 13 the Prime Minister’s Office allocated 3,100 crores of PM-Cares funds to the fight against COVID-19. Out of this a sum of approximately 2,000 crores was earmarked for the purchase of ventilators, 1000 crores were set aside for the care of migrant labourers and 100 crores were given to support vaccine development, as per the PMO press release.

A note of concern, however, is the fact that for over six weeks the funds collected via PM-Cares after the first week have not been made available publicly.

Given the woes of state governments in the wake of low transparency and excessive dependence on the Centre, a few made-up stories are doing the rounds of WhatsApp University, of which I address three.

While the myth is fascinatingly built on the fruits of the anti-Congress campaign, it is a lie.

The PMNRF was started amidst the Partition rifts to help refugees. The utility of PMNRF expanded in later years. Eminent persons like senior politicians, representatives from the Tata Trust and the Federation of the Indian Chamber of Commerce and Industry were included as members. The press release on January 24, 1948 in the context of starting PMNRF clearly clarified the purpose and committee membership.

Unlike the cryptic PM-Cares fund, the press release elaborated suitably about the PMNRF. To this day the PM is the chairman of the Prime Minister’s National Relief Fund and that money cannot be used without his directions. However, the other committee members will know how the money is being used.

So, a rather naïve question: Is there an issue with transparency?

It is true that PMNRF money can be used for different calamities and disasters; it has even been allocated for heart surgeries, cancer treatments, kidney transplants, acid attack rehabilitation etc. Moreover, PMNRF audits show clear reports of spending and purposes.

On the other hand, the objectives of the PM-Cares fund are broad and reek of ambiguity. For instance, they state the funds can be used to provide “assistance of any kind relating to a public health emergency or any other kind of emergency, calamity or distress, either man-made or natural, including the creation or upgradation of healthcare or pharmaceutical facilities, other necessary infrastructure, funding relevant research or any other type of support”.

The PM-Cares funds can also be used “to render financial assistance, provide grants of payments of money or take such other steps as may be deemed necessary by the Board of Trustees to the affected population”.

And lastly, the guidelines of the fund allow for the trustees “to undertake any other activity, which is not inconsistent with the above objects”.

In other words the COVID-19 pandemic is just an occasion to start the fund and not the underlying basis of the fund.

‘To use any money from the Consolidated Fund of India, Parliament’s approval is needed. PM-Cares doesn’t need such approval and can be used without delays and red-tape in such an emergency period. Thus, PM Modi started this fund suddenly’

No, the PMNRF was not formed by the Parliament. It was started by Nehru. The PM’s joint secretary was made the Secretary to the PMNRF, who will also direct the money for any given purpose. In other words, it is a wrong to claim that PMNRF spending needs Parliament’s approval.

Concluding with another naïve question: What kind of health emergency special fund are we working with? #KhabarLive #hydnews