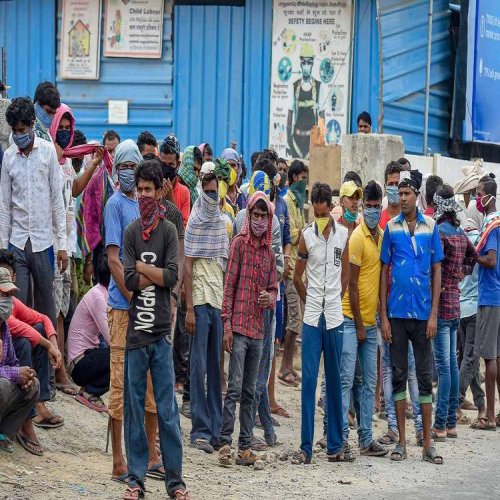 The new initiative by Telangana chief minister K Chandrasekhar Rao to cater wit migrant workers sent a sign of relief in all pending projects in agriculture and construction fields.

The government sending all migrant workers to their home states and subsequently hiring new labour with assured terms to handle in crisis time. There are 40 trains catering migrant workers to help to reach home at the same time, the new hired workers are coming back in the same trains to start working in the assigned projects.

Meanwhile, there was little respite for Mohammad Rafeeq, who stood in the sweltering heat in Hyderabad’s Maqtha colony, opposite the Raj Bhavan. He is one among at least a hundred who had lined up to register himself in the hope of heading home to Bihar.

“The construction work at the site where we used to work has resumed, but we are not confident that we will get paid. We are not sure if work can go on as there is a shortage of material. I would rather go home and work in the fields,” said Rafeeq.

Rafeeq isn’t alone. Thousands have been lining up to register to return to their home states.

Telangana Chief Minister K Chandrashekar Rao (KCR) on Tuesday said that the Bihar-bound trains to drop off the migrant workers will be bringing back around 20,000 new workers to work at rice mills across the state.

It is not just the rice manufacturing sector, but also the construction sector in the state, trying desperately to retain their workforce or get new workers to complete pending construction projects in Hyderabad. The Chief Minister’s decision to bring in a new workforce comes after appeals from mainly these two sectors.

Of the incoming batch of workers, 20,000 of them, sought by rice mills in the state, are headed to Telangana. Having previously worked with the rice mills, mill owners have contacted these workers currently in their home states and asked them to board the train back to Telangana. It is learnt that the Bihar government would only screen these workers prior to them boarding the train to Telangana.

The Telangana government had announced on May 4 that 40 special trains will operate from the state every day over the week to send migrant workers back to their respective states. As of May 6, only 13 trains have left the state, said a senior officer with the Hyderabad police.

G Ram Reddy, President of the Confederation of Real Estate Developers Associations of India (CREDAI),Hyderabad told #KhabarLive that those from the construction sector had reached out to the Chief Minister’s office to allow workers to return in the trains.

“A few of us reached out to a Minister to put in a word with the Chief Minister, after which he made the announcement,” said Ram Reddy. “The workers used to work in batches. For a few months, some will work here and return to their hometown. Then, a fresh batch of workers would arrive at work. It has always been a cycle,” he said.

Migrant workers heading back home will have a big impact on the construction sector, he added.

With many labourers already having left on foot, the construction industry has been functioning with a 69% workforce and is dwindling further.

The apex body for private real estate developers in India, however, is hopeful that labourers from states like Uttar Pradesh, Jharkhand, Bihar will sign up for work in Telangana due to the scarcity of work in their hometowns. “But many of the workers are worried about lockdown extensions,” added Ram Reddy.

Rafeeq, on the other hand, does not think that anyone known to him back home would return to the city anytime soon.

“There are not enough construction materials at the site due to lockdown. The raw materials are not reaching the site. Earlier, I used to get Rs 1,000 for a day’s work. Now, I can hardly make Rs 200. The contractors don’t have money coming in to pay us. How will they pay the new workers?” questioned Rafeeq, who worked as a labourer with a subcontractor at a construction site near Banjara Hills.

On a practical note, Rafeeq said that most workers simply do not trust the state government in Telangana.

“They promised to give Rs 500, took my Aadhaar card number and bank account details twice. But nothing has come. We are surviving on dal and rice provided by the subcontractor, but for how long is he going to keep providing rations? He is also short of money. Under such a situation, who would want to come and work?” asked Rafeeq.

“Back home, it is time for wheat harvest. I will manage somehow,” shared Rafeeq, a father of four children. “My family is urging me to come back. They don’t want me to suffer here,” he added.

Ram Reddy argued that some workers are willing to come back to work in Hyderabad.

He said, “It won’t be a huge number as there is a ‘fear psychosis’ among the workers. In Telangana, the cases are fewer in number. Currently, the government is also supporting them. That’s how migrants may come back soon.”

When the lockdown was first announced in March, the Telangana government had promised each migrant worker 12 kg rice and Rs 500 as relief. Chief Minister KCR had promised to provide the workers with atta as many of them prefered roti as their staple food. The implementation, however, was lacking, with many distribution points set up at the mandal revenue offices either running out of rations or cash.

As for the 20,000 workers from Bihar who are headed towards Telangana to work across the 5,000 odd rice mills in the state, Dayakar Reddy of the Hyderabad Rice Millers Association said, “We have a requirement of 80,000 workers. At present, we have roughly 20,000 workers from different states who don’t wish to go back as they have work and income here.

The additional 20,000 workers we requested are people who have worked with us before. We collected their phone and address details, reached out to them asking if they are willing to come. We gave the same details to the state government to arrange their transport.”

The crucial question, however, is if these migrant labourers from other states would be quarantined for 14 days as per protocol prior to starting work.