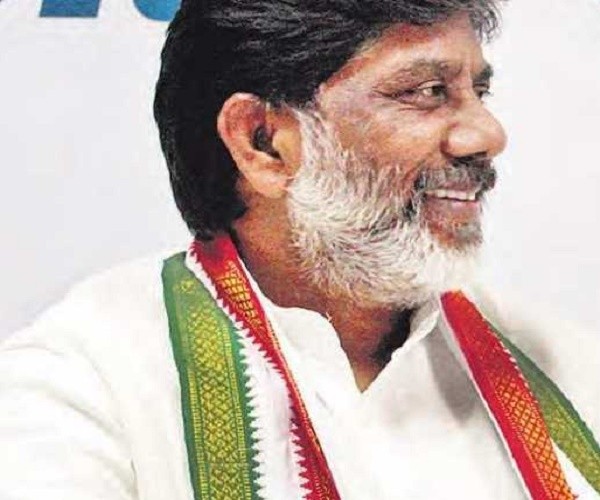 Senior Congress leader Mallu Bhatti Vikramarka has stated that he is not aspiring to be the Chief Minister of Telangana. In a freewheeling discussion with #KhabarLive, the two-time MLA from Madhira constituency in Khammam district said: “I will work for the party’s ideology to be spread among the people.”

Though there are several indications that the grand old party might project a Dalit Chief Ministerial face and that Vikramarka could be a strong contender for the post, he dismissed them saying such decisions will be taken only by the CLP. “The Chief Minister candidate will be decided as per laid our procedures and a CLP will be formed,” he said. “There are many Dalit leaders in the party and no promises have been made as of now. Anything regarding the Chief Minister position will be after the elections (sic),” said Vikramarka, who was recently made the chairman of the party’s campaign committee.

The talks of a Dalit Chief Minister face, especially by the Opposition, assumes significance as the TRS has failed to keep its poll promise of elevating a SC leader to the top post. Even during his recent visit to Kurnool, party chief Rahul Gandhi mentioned that the first Dalit Chief Minister in the country was from Andhra Pradesh, in the form of Damodaram Sanjivayya. This has added fuel to speculations.

Right from the 1940s, self-respect has been the backbone of agitations in Telangana. Now, the Congress party is planning to cash in on that emotional connect to come to power. “Under the current TRS regime self-respect of each and every section of the society is at stake, be it farmers or Dalits or women. This election will be about the self-respect of people,” said senior Congress leader Mallu Bhatti Vikramarka during an interaction with #KhabarLive.

The self-made leader from Madhira constituency in Khammam, who is now the campaign committee chief for the party, lambasted the TRS for failing to attain the dreams of hundreds of martyrs and aspirations of Telangana people in realising the true meaning of self governance. “Many are under the impression that the TRS is strong, but that is not true,” he said. Attacking the pink party for “swindling money” Vikramarka claimed that public accounts would be under stress in the coming years.

“If you look back into the history of Telangana, be it in the armed struggle of the 1940s or the agitation for a separate State led by the Communists two decades later, the fight was against the feudal system and for self respect,” said Vikramarka. “But, even after getting a separate State, people are struggling,” he argued.

“When the agitated farmers questioned the government, they were branded as traitors and police cases were booked against them. Is that not an attack on the self-respect of the farmers’ who are the backbone of the country,” Vikramarka questioned. “What respect is being given to the Dalits, backward communities, the landless and shelterless,” he added.

ALSO READ:  Want Feeling Difficulty in 'Engineering Studies', Don't Worry - At 'Projects Bazaar' You will Get Everything 'Readymade' Projects At Rs.3000 Only In Hyderabad!

Meanwhile, TRS, which is planning to play up Mission Baghiratha and Sita Rama irrigation projects in the upcoming poll season, is likely to face some serious questions from the Congress on money spent on these schemes.

Will Priyanka Gandhi enhance poll fortunes of the Congress in the upcoming elections? When asked, TPCC campaign committee chairman Mallu Bhatti Vikramarka did not rule out the possibility. “Not just her, Sonia Gandhi and Rahul Gandhi will also visit Telangana soon. The party leadership will decide when they will attend the public meetings,” he said.

“They will be definitely there to campaign in the State considering that their presence will add value,” Vikramarka said. Also, with assembly polls being simultaneously held in Madhya Pradesh, Rajasthan, Chattisgarh and Mizoram, Rahul Gandhi’s presence is set to be minimal while his family members and other senior leaders would go all out in the campaigns. #KhabarLive