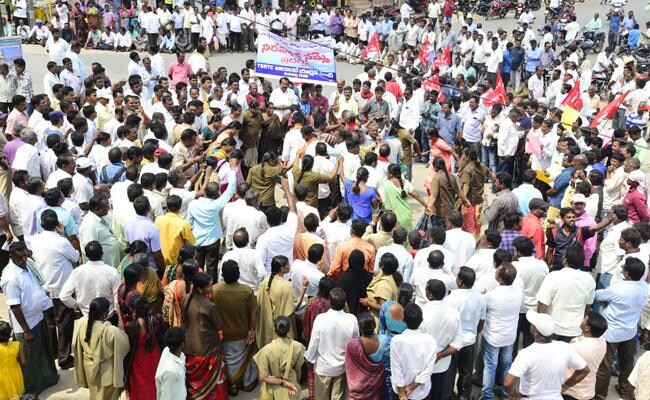 The indefinite strike by employees of Telangana State Road Transport Corporation (TSRTC) entered the 13th day on Thursday as no end appears in sight to the impasse despite High Court directions to both the government and employees to find a negotiated settlement.

With no invitation from either TSRTC management or the government for the talks, over 48,000 employees were continuing the strike.

The striking employees staged protest in front of bus depots to prevent the buses from coming out but they were arrested by the police.

Security has been further tightened at the depots and bus stations as TSRTC has stepped up efforts to restore normal operations with the help of temporary employees.

TSRTC officials said they were operating 75 per cent of bus services and would soon be restoring full operations to ensure that there is no inconvenience to people.

Making it clear that there is no change in his stand, Chief Minister K. Chandrashekhar Rao told a meeting of officials late Wednesday that there will be no talks with the striking employees.

He also ruled out taking back the employees who failed to report to durty before the expiry of the deadline.

The meeting with Transport Minister P. Ajay and senior officials lasted for five hours. While unlike after the previous meetings, no statement was issued from the Chief Minister’s Office (CMO), official sources said the chief minister ruled out any talks or compromise with the striking employees.

KCR, as the chief minister is popularly known, noted that the strike during festival time has caused a loss of Rs 150 crore to TSRTC, adding to its financial woes.

Pointing out that his government provided Rs 3,300 crore to the transport utility in last five years, KCR said there was 67 per cent jump in the salaries of the employees.

Meanwhile, striking employees in Karimnagar tried to lay siege to the residence of state minister Gangula Kamalakar to protest what they called his provocative statements on the strike. Police arrested the protesters.

Joint Action Committee (JAC) of striking employees has called for ‘dhoom dhaam’ or protests with the display of folk arts across the state on Thursday.

Student bodies will also take out rallies in support of the employees. A rally is planned from Osmania University later in the day.

The JAC is also going ahead with its plans for Telangana shutdown on Saturday. Opposition parties and several trade unions have declared support to the shutdown. #KhabarLive