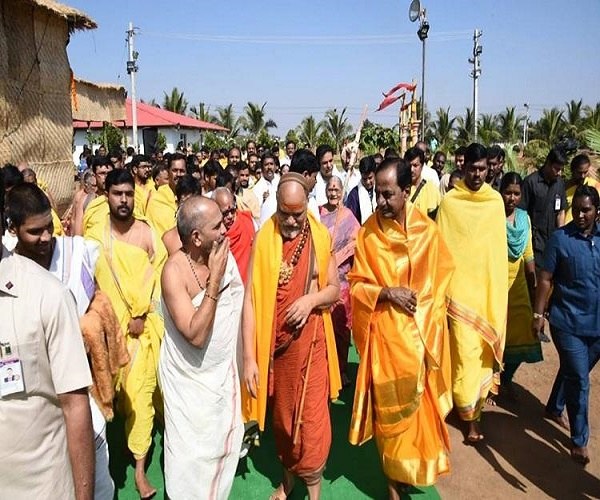 Telangana Chief Minister K Chandrasekhar Rao’s decision to host a massive five-day yagam at his farmhouse in Siddipet district has drawn criticism, but those comments have fallen on deaf ears as far as the Telangana Rashtra Samithi (TRS) president is concerned.

Dubbed the ‘Maha Rudra Sahitha Sahasra Chandi Yagam,’ over 300 priests from different states have turned up to conduct prayers beginning Monday. The event will see attendance from all elected MLAs, MLCs and MPs along with senior TRS leaders and even their family members.

This is the first major religious event being conducted by KCR, after his party swept the polls in December last year, bagging 88 seats out of the 119-member Legislative Assembly. Reports also suggest that the chief minister may announce the remaining members of his cabinet after the event concludes. As many as 300 ‘Rithviks’ or priests, including those from Andhra Pradesh, Maharashtra and Karnataka, have already reached the venue to conduct the yagam.

Since being elected in 2014, KCR has been no stranger to controversy as he has repeatedly drawn flak for his superstitious beliefs, whether it is his obsession with making government buildings ‘Vastu’ compliant, or his expensive ‘thanksgiving tour’ where he visited several temples in the two Telugu states and donated jewellery to the presiding deity, allegedly from the state exchequer.

Despite this, observers say that criticism seems to be of no use where KCR is concerned as he has been elected for another five years and dissent is unlikely to stall him or dampen his spirits.

“It is political hubris. The attitude comes from big electoral victories which are taken as an endorsement of political strategy,” notes activist and academic Padmaja Shaw.

“In spite of all the piety, there doesn’t seem to be any moral base from which any of these politicians are operating,” she adds, pointing to the amount of liquor and cash flow during the elections last month.

“KCR doesn’t seem to think it is important to form a cabinet even one month after the polls. Politicians have perfected the art of capturing votes and winning elections, so it gives them total impunity after that,” Padmaja argues.

T V Rao of the Jana Vignana Vedika, a rationalist forum, says that there are two reasons that may have made KCR host the religious ceremony. “While one way to perceive it might be to say that KCR is blindly superstitious and religious, we also have to take into account that he is a good strategist. He understands politics well and we also must take into account that the people want a leader who is God-fearing. So, while he may be doing it out of belief, it may also help him get votes in the upcoming Lok Sabha polls.”

Though the BJP said that they have no problem with KCR’s decision to conduct the yagam as it was his personal belief, they went on to criticise his priorities for the state. “However, who will govern the state? Why did people vote him back to power? The distressed farmers were promised Rs 1 lakh loan waiver as soon as he returned to power but he has conveniently forgotten that. Instead, he indulges in his personal and political agenda, both on the basis of the Federal Front where he is travelling on public money, and today, in his personal errands,” BJP Chief Spokesperson Krishna Saagar Rao said in a video statement.

“We want to ask him and he should be answerable, who will govern the state? Where are the Council of Ministers even after over one month after election results? Did people elect him just to do politics of appeasement and indulgence of his personal errands or did they elect him to govern the state?” the BJP leader asked.

Ahead of the polls, KCR performed two homams at his farmhouse in Erravalli. KCR and his family performed the Raja Shyamala Chandi Homam, and Chandi Sahitha Rudra Homam for the ‘welfare of the people’ with over 100 priests participating in the event. No mediapersons were allowed at the venue.

In 2015, he performed a Rs 15 crore ‘Ayutha Chandi Maha Yagnam,’ due to Telangana’s drought and scanty rainfall, even as the state was plagued by farmer suicides. #KhabarLive