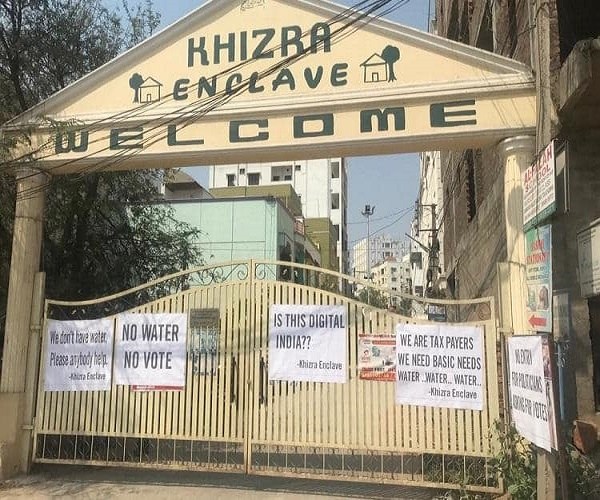 The residents of Khizra Enclave in Hyderabad are angry. With the general elections just days away, they took to the streets earlier this week, to grab attention and make one thing clear to the candidates of their constituency – no water, no vote.

The main gate to the enclave was adorned with posters that read ‘No entry for politicians asking for votes’ and ‘We are tax payers, we need basic needs’. Videos of the incident where locals raised slogans also did the rounds. 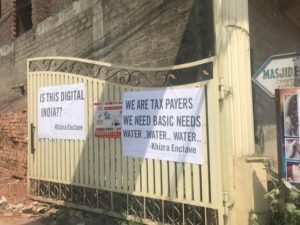 The residents of the enclave, located in Puppalaguda just a few km from the Financial District where massive offices of MNCs are located, say that the situation has been going downhill over the last few years.

“We don’t have any drinking water. Though it has been two decades, we have no water connection despite repeated assurances by successive governments,” says Syed Kazim, executive member, Khizra Enclave Welfare Association.

“For potable water, we depended on borewells, but they are drying up quickly. Even if we dig 1,200 to 1,500 feet, the water dries up by January. By April and May, there is not a drop of water,” he adds.

Speaking to #KhabarLive, Dr Mohammed Ali, the president of the association, says, “As a result of dry borewells, we are forced to depend on private water tankers for potable water. They fleece and exploit the residents here because of our situation. For a tanker that should cost us Rs 800, we are charged Rs 1,400 to Rs 1,600 during summer.”

“For drinking water, we depend on water cans that we buy from nearby shops,” he adds.

Asked if there has been any change since the protest, Mohammed Ali says, “People have started talking about it and other welfare associations have also taken note. Political candidates have also contacted us and assured us that they will solve the problem. But we are demanding an action plan. We don’t want any hollow promises.”

However, he is quick to add that they may not boycott the vote after all.

“We understand that solving the problem will take time. The goal was to highlight the issue. We are well-educated and we should not deprive ourselves of our right. We will go and vote,” Dr Ali says.

The issue at Khizra Enclave is symptomatic of a larger problem in the city, such incidents being far from isolated. Just days before the protest in Puppalaguda, residents of the Lakshmiguda Housing Board Colony also took to the streets, stating that they had to go to great lengths for a basic amenity like water. 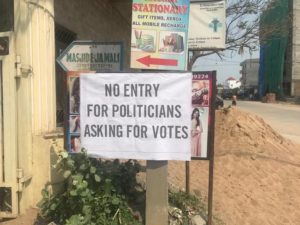 Parts of Cyberabad, where Hyderabad’s IT sector is located, has witnessed rapid urbanisation over the last decades with tall skyscrapers coming up in areas like Gachibowli, Serilingampally, Kondapur, Manikonda and Narsingi. Deep borewells are dug to meet the increasing demand for water and as a result, the groundwater levels have depleted rapidly.

Highlighting how grave the situation is, a report by Niti Aayog titled ‘Composite Water Management Index: A Tool for Water Management 2017’ said that by 2020, 21 major cities, including Hyderabad, are expected to reach zero groundwater levels, affecting access for 100 million people.

Under the Andhra Pradesh Water Land and Trees Act, 2002 (APWALTA), the state government has already made it mandatory to construct rainwater harvesting pits in all premises where the plot area is more than 200 sq m. However, activists say that it is rarely implemented.

Meanwhile, some activists express hope that the issues will be addressed over the next five years as several water projects were being implemented.

Speaking to #KhabarLive, M Veda Kumar, Chairman, Forum for a Better Hyderabad, says “To address the drinking water needs of Hyderabad, we already have water from reservoirs like Singur and Manjira. The government’s agenda is to bring additional water via the Kaleshwaram and Pranitha Chevella projects, this has already reached areas along the Outer Ring Road. In course of time, there will hopefully be no water problem in the city.” #KhabarLive

‘You Are Not An Indian National’ – The ‘Scariest Notice’ Slapped...

At Osmania University, Dalits Feel Let Down In Telangana Elections

How AIMIM Supremo Donated 15 Bottles Of His Blood To A...