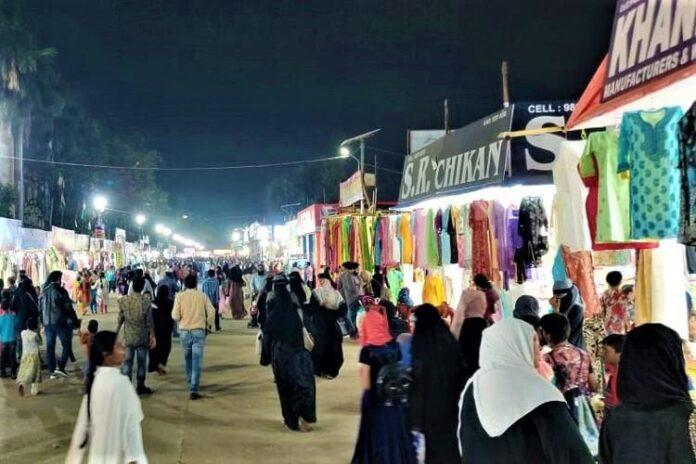 Hyderabadis are known for their mood. Always, they decide the result based on mood and trends. This year Numaish becomes the target of bad mood of Hyderabadis. Result: Slowdown in trading, footfall and shopping spree. Mood of Hyderabad spoiled the Numaish business this year despite many hurdles and socio-polutical advancements.

At a clothing stall in Hyderabad’s annual Numaish fair, a trader from Lucknow selling the traditional Lucknowi Chikankari fabric is haggling with a customer. “Selling you this at Rs 1,100 won’t give me a profit. We generally don’t entertain much bargaining, because if not you, someone else will buy it. But this year no one is buying. So, selling it to you at this price, is better than no sale at all,” he says as he gives in to her final price.

Numaish has been an annual event in Hyderabad for over 80 years that sees lakhs of city dwellers throng to purchase clothes, food, accessories, home essentials, etc from stalls set up by traders from across the country. The fair, actually called the All India Industrial Exhibition began in 1938 during the era of the last Nizam of Hyderabad Mir Osman Ali Khan.

The exhibition was started at Public Gardens in Hyderabad’s Nampallu area as an attempt to promote goods made locally. However, over the years, it has grown to become one of the largest annual exhibitions in the country. This year, there are around 2,900 stalls at the 46-day exhibition that began on January 1, 2020.

However, the crowds are not the same at Numaish this year. While the fair sees a massive crowd all through the 46 days that it is set up, this year, traders in several stalls sit waiting for customers.

The trader at the Lucknowi fabric store, who did not wish to be named, says that so far this year, they have done 50% less business compared to last year. “There is a lot happening in the country. There are protests everywhere. The government isn’t focusing on the economy. People don’t have jobs, or money to buy. Sales are down,” he says.

Several stalls saw little or no customers
Another trader from Delhi, who was selling Indian wear said that business has been 15% less than last year. “Even on weekends, we usually would see a massive crowd. But this year, weekends look like how weekdays were last year. I heard that only 35,000 people had visited the fair as of January 10. Last year, at the same time, 50,000 people had visited the fair,” he adds.

However, Dr B Prabha Shankar, Secretary of Numaish says that footfalls have been the same as last year. As of January 30, over 9.5 lakh people visited the exhibition, he says.

“Maybe less people came to stalls of people you spoke to, but based on ticket sales, the crowd is on par with last year and these stalls are doing brisk business,” Prabha Shankar told #KhabarLive. This year, the organisers are expecting 20 lakh visitors. In 2019, 18 lakh people visited Numaish.

Traders, however, point out that footfalls haven’t translated into sales for them.

Rakesh Singh, who has a stall called Lucknow Manish emporium says there are people visiting the fair, but aren’t making purchases. “Earlier, people would come here and buy in large quantities as well. Now it feels like people are only buying what is absolutely necessary for them. As a result, we are seeing very few sales,” he rues.

One of the sellers at a Rajasthan handicraft emporium says that there have been barely any sales this year. “The situation is bad. We haven’t seen as many people as last year. Even those who come, aren’t really spending,” he says.

Safety concerns, economic slowdown and protests
There are several things going against traders this year. Last year, there was a massive fire at the exhibition that gutted over 200 stalls, raising safety concerns. In fact, the Telangana High Court had said that permission for the fair wouldn’t be given unless all concerned departments presented reports of inspection and safety arrangements. Only after it went through inspection reports was the nod for Numaish given. This came after Khaja Aijazuddin, a lawyer filed a Public Interest Litigation (PIL) pointing out lack of safety measures at Numaish that led to the fire last year.

Numaish Secretary Shankar says #KhabarLive that this year several safety measures have been taken to tackle emergencies such as a fire breaking out. According to him, an underground pipeline has been built with a capacity of 3 lakh litres of water, which are connected to automatic water pumps.

“These water lines are connected to 80 hydrants spread all over the exhibition ground with hose pipes. Each hydrant is equal to one fire engine. From the hose pipes, water can go up to 30 metres. In the event of a fire at any stall, it can be extinguished in seconds,” he adds.

In addition to this, the country’s economy is currently faced with a slowdown with a dampened consumer sentiment. The government projected GDP growth to be at a 11-year low and in December too, inflation came in at a five-year high.

Several traders are also under the impression that the on-going protests across the country over the Citizenship Amendment Act (CAA) and the National Register of Citizens (NRC) could also be why people haven’t been attending the fair.

Kashmir traders pin hopes on Numais
Every year, Numaish sees over 1000 Kashmiri traders setting up stalls selling Cashmere shawls, clothes, Kashmiri fur, dry fruits, leather products, among others. And these stalls are usually a hit with the residents of the city, often witnessing huge crowds.

But this year is different for these traders. The Kashmir valley has seen a shutdown for nearly six months since the abrogation of Article 370 in August. The Union government restored 2G internet only a few days ago. With tourist influx nearly down to zero, businesses in Kashmir have been forced to shut shop.

Several traders have come to Numaish in the hope of making money. However, this year, there are barely any customers at many of these stores.

Sahil Khan and his family, who sell Kashmiri silk, fur and apparels, have been setting up a stall at Numaish for three generations now. He says that costs too have increased. According to him the fee for the stall and the electricity charges at Numaish have nearly doubled.

“Somehow we managed to come here thinking we will do business. The shutdown has badly affected our businesses. We are majorly dependent on tourism and without tourists, we have been forced to shut shop. Even here people aren’t buying. The crowds don’t seem very less, but it’s apparent that their purchasing power has reduced,” he says, also admitting that sales at Numaish have been down this year.

Another trader from Kashmir who is selling Kashmiri shawls says, “Our business has been badly affected and we came here hoping to make some profits. But it seems like people aren’t shopping much this time. Everyone seems busy with protests. We haven’t seen much business happening here. It’s down by 20-30% compared to last year,” he says.

Prabha Shankar, however, says that the demand for stalls was high this year from Kashmir. “This year there was more demand from traders who applied to set up stalls. We gave to around 1000 traders and manufacturers. And they are doing brisk business,” he insists.

Syed Parvez, a trader from Kashmir who sells, and exports dry fruits, honey, oils, etc says that the fact that the country’s GDP is low is being reflected at Numaish.

“The capacity of people to spend is low. They’re not able to spend as they’d like to,” he says.

Numaish is set to end on February 15 and Prabha Shankar says that as of now there are no plans to extend it.

With there being another two weeks to go, traders are hopeful that business will pick up. The trader from Delhi says that more people visit in the final days of the exhibition. Another trader from Kashmir says that the last two to three days see the most crowd because people come in hope for massive discounts in the end. While he hopes that people come in large numbers, he says giving massive discounts doesn’t seem to be a possibility this year. #KhabarLive

How Law And Govt Schemes Supporting People With Disabilities Are Failing...

A School In Telangana Where Students Become Teachers Under ‘Green Gurus’...

Why Justice Elusive In Telangana As No SHRC, No Lokayukta And...