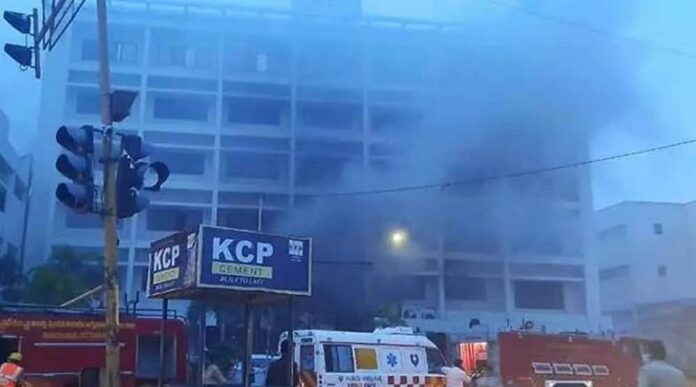 It’s a matter of shame, official apathy and sheer negligence of this ghastly incident in Andhra Pradesh. It is time the State administration learnt a lesson from the ghastly fire accident that took place at Hotel Swarna Palace in Vijayawada which claimed ten lives.

Since the country is passing through testing times and is battling hard to fight the corona pandemic with no State having enough infrastructure facilities, many hotels across the country have been converted into quarantine centres. In Andhra Pradesh alone, 134 hotels have been given on hire to various hospitals to overcome the shortage of beds.

Of them, Vijayawada has 20 hospitals. This could have been perhaps averted if the administration was alive to what was happening elsewhere. On Friday, a major fire broke out in Shrey Hospital in Ahmedabad which claimed eight lives.

Thanks to the ‘Bureaucratic Cholesterol’, officials in AP never thought of waking up and never tried to find out whether the hotels which have been turned into quarantine centres and hospital rooms were safe or not. None of the Ministers and a whole lot of political party leaders who visited the hospital had any information about this issue.

All they could say was investigation was on. It is unbelievable that the State administration does not know how many hotels have taken NOC from the fire department. The hotel associations claim that they have obtained NOC and that the administration had permitted to convert hotels into hospitals only after verification by the Vijayawada Municipal Corporation officials. The Fire Department says as per the rules, NOC is not necessary for Swarna Palace building when it was a hotel because its height is less than 18 metres.

This, again, is funny reasoning. A hotel generally has a restaurant as well. How come it does not require NOC from the Fire Department? Secondly, even if we agree that this argument is true and that laws are archaic and no Corporator or Mayor or for that matter the State government ever bothered to have a relook into the rules, the big question is why did not the Fire authorities take a fresh look into the issue of NOC when the hotels were converted into hospitals.

It is mandatory for hospitals to have NOC and also emergency exit routes in case of fire. Did they not know that inflammable material like spirit, sanitisers, masks, oxygen cylinders would be there? This is nothing but a classic example of extreme callous attitude.

The only logical statement that came initially was that the fire could be due to a short circuit. But many others came up with illogical statements saying that the fire took place because oxygen cylinders and sanitisers were stocked in the hotel and that sprinkling of sodium hypochlorite is also done as part of sanitisation activity. But no one could explain how they could spark the fire.

The Vijayawada fire incident also brought to fore another dirty angle. It showed that many people who are active on social media have become insensitive. They seemed to be blinded with love for one political party. Comments were posted on some social media that the hospital belonged to a person from a particular community and the previous government needed to be blamed for the incident as they never bothered to check the hotels.

Let’s agree for argument sake that the previous government was corrupt and negligent. But what was the present set up doing? Is it not their responsibility to correct the omissions and commissions committed by the previous regime? Why no official was able to give the list of hotels which have violated fire safety measures? Does it mean that all hospitals in Vijayawada are safe?

At least that they should claim. Another aspect which needs to be investigated is the real-time response of the fire department. It is said the fire broke out at 4.30 am and the fire brigade was informed at 5 am and they took another neat 15 minutes to reach the place. Why this delay? Announcing ex-gratia is not the solution. The government should immediately review the situation, check all hotels turned into hospitals in the State and ensure that no such incident takes place again. #KhabarLive #hydnews