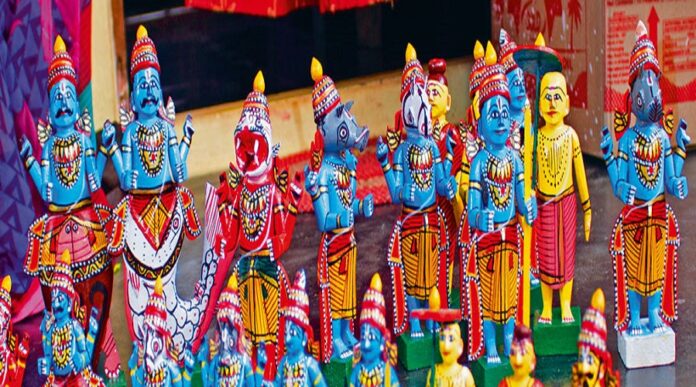 A dusty, broken road drops down and turns left from the National Highway 30 at Kondapalli in Andhra Pradesh. Locals call it Qila Road. It snakes up green hills to the fort where once Bahmani kings held sway. A procession of single-storeyed buildings with corrugated roofs lines the road on the right. On the left, the land stretches to meet the hills. Kondapalli is green and yet very urban, and about 25 kilometers north of Andhra’s second most populated city, Vijayawada.

It’s not on the regular tourist trail and neither an obvious choice for a day trip outside the city. And yet, if you have an afternoon free when visiting Vijayawada or nearby Guntur, Amaravati, there is no better way to experience a slice of Andhra than a few hours along this stretch. 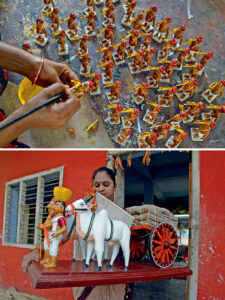 Everyone who lives on Killa Road is an artist—mothers, fathers, sons and daughters, and their grandparents before them. They make toys—colorful wooden toys of gods and goddesses, dancing girls with tilting heads, bullock carts, village scenes recreating festivals, homes, and presents. Every house is a highly skilled cottage industry, every open veranda a workshop.

It’s early afternoon in late October. I walk past a few verandas strewn with chips of wood in odd shapes and sizes, and small tubs of paint in vibrant primary colors. A radio croons softly in the background. A couple of men huddle over the wood, carving shapes. I take a few pictures. One of them looks up. My companion, a native Telegu speaker, asks him if we could sit and watch him work for a few minutes.

But Hanumanth Rao gets up and leaves without a word. A little puzzled we look to the two women who continue to smile and paint. As we prepare to leave, Hanumanth returns with a small stick of wood no taller than four inches point to my camera, picks up what looks like a miniature sickle, and starts carving. I set the camera to record and watch, mesmerized.

The sickle moves swiftly, the woodturning in his hand, his fingers mimicking the movement like he is sharpening a pencil. Within minutes, a figure takes shape—a woman, the hollow of her eye, her pointed nose, the drape of her sari. It’s a near-perfect miniature. “But this isn’t complete. It’s only staged one,” Hanumanth explains. He begins his story and that of his toys and every few minutes I get an abridged translation.

He has been carving toys on his veranda for 18 to 19 hours a day for the past 30 years, as his father did long before him. The men in the house carve, while the wives paint. The toys have a four-stage life cycle. After the initial carving is complete, a dark red sticky paste, made out of sawdust and tamarind seeds, is applied to the figures to accentuate the human shape, a voluptuous body, or an ornament, like a crown. Once air-dried, they are dipped in white emulsion.

After this primer is set, the women take over, first applying a couple of layers of base paint and then come the finer brush strokes of vibrant colors. The wood itself is local and grows freely and abundantly on the slopes of the Kondapalli hills. It’s a light-colored softwood called puniki. Often families plant a couple of these trees in their own homes, although the wood now used to make the toys come from the local co-operative.

Hanumanth has two boys who work in the city and support their father as he practices his art. “This is back-breaking work with not much pay. There is government funding but not everybody gets it. After about 45, your reflexes slow down. I wouldn’t want this life for my sons, but they are happy supporting me.”

As the afternoon pales, I head back to the car. Killa Road could easily have been just another dusty, broken road had it not been for its residents. Yet, with their lives and their livelihood, they have transformed it into a story of Andhra that is both real in 2018 and centuries old.

The next day, we head south from Vijaywada, a three-hour drive to the coast in search of kalamkari. In an airy courtyard, under the monotonous whirl of a few noisy ceiling fans, sit seven men huddled over individual worktables. The younger men are thin, athletic. They sit on the floor in white jerseys and trousers. The older ones sit in blue-checked lungis. Their shirts hang from hooks above their heads. All around them are pieces of wood, from chips and shavings to larger blocks.

Not a word passes between them. Their right hand holding a long woodblock called tapi comes down at lightning speed and goes up again. The left-hand chips away at the wood with a metal kalam. There’s music in their movement. It’s sharp, swift, and clinical. One wrong chip and the whole block would be wasted. Small beads of sweat appear on the faces. The hands tap dance through a pattern. The ceiling fans creak. It’s an odd symphony. 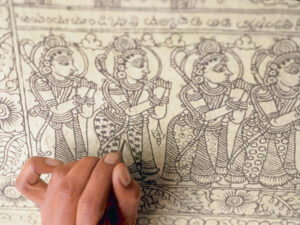 This is the workshop of two brothers—Gangadhar and Narsaiah—in the market town of Pedana, near the port of Masulipatnam. Here the Greeks and the Romans traded in muslin in the third century B.C. The Romans bought muslin for their togas and left behind gold coins. Today, the town is India’s sole manufacturer of kalamkari woodblocks.

Both brothers are in their 50s, both winners of the prestigious Rashtrapati Award and several National Awards for their contributions to the traditional kalamkari wood-block making. Gangadhar, the older brother, speaks through an interpreter. He is a short man with a pockmarked round face, wavy oiled hair, and thin eyes that shine like little gemstones.

He offers us a cold drink and shows us around—the initial paper sketch, the transfer on wood, the sharp metal pens chipping away at them, the soaking of the woodblocks in sunflower oil, and then the final test on cotton. A kalamkari block is born and from it, hundreds of thousands of saris, textiles, and furnishings.

And then it strikes me—where are the women? The largest consumer of the saris and textiles that are born out of Gangadhar’s award-winning kalamkari blocks are women. But there’s not a single woman apprentice in his workshop. I realize that the group I travelled in are also all men—a colleague from Bath Spa University and two others from the National Institute of Design in Vijayawada.

None of the men reply. I repeat my question. Gangadhar has four daughters, but he won’t teach his trade to any of them. They will grow up, get married, and leave home. If they learn his skill, they will take it with them. So instead, he will teach his skill to his brother’s two sons. They too will marry but not move away. But what if his brother too had two daughters instead?

An awkward silence descends in the courtyard. No one answers. Gangadhar smiles, takes my palm, and puts two small wood blocks in it. They are beautiful, a baby deer and a flower. When I go to return them, he closes my palm and smiles again. “They are for you. He wants you to have them,” the interpreter says.

We leave Pedana and head back to Vijayawada. In the darkness, as the car bumps and rides an uneven motorway, I rotate Gangadhar’s little wood blocks in my palm and drift away. Slowly, I start getting annoyed with myself. Perhaps I didn’t need to probe Gangadhar with my question when I knew full well he wouldn’t have an answer. Neither his brother would. There are probably no women kalamkari woodblock carvers in Pedana. There never will be, unless we all contribute to the change. #KhabarLive #hydnews