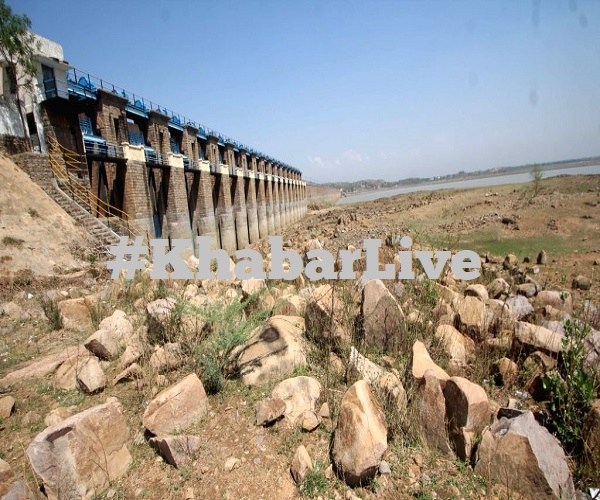 A sluggish progress of delayed Monsoon in Telangana has culminated in a huge rainfall deficit, so much that, Hyderabad could soon be at the risk of a water crisis. The main sourced reservoir is dried up and only 48 days water remained according to water authorities.

Hyderabad primarily gets its water from the Nagarjunasagar reservoir (River Krishna) and the Yellampally reservoir (River Godavari). Today, with the rainfall deficit, the water levels in both reservoirs have dropped steeply, raising concerns that it might impact the citizens of Hyderabad.

How bad is the deficit?
According to the data with the Telangana State Development Planning Society, which recorded the cumulative rainfall from June 1, as of July 14, Hyderabad district witnessed 115.1 mm of rainfall, against the normal rainfall of 161.7 mm, a deviation of -29%.

The districts of Rangareddy and Medchal-Malkajgiri, which also cover large swathes of Hyderabad, Secunderabad and Cyberabad, have witnessed 115.4 mm and 115.5 mm of rainfall respectively against the normal rainfall of 152.5 mm and 177.9 mm, thereby resulting in a deviation of -24% and -39%.

Depleting water levels
According to data with the Irrigation Department, the Nagarjuna Sagar has a capacity of 126.63 TMC (Thousand Million Cubic feet), which roughly comes up to around 590 feet. Its dead storage level is 510 feet. Data shows that the water level in the reservoir is already at 507 feet and it continues to pump out over 1,000 cusecs (cubic feet per second) – despite little inflow – to meet the needs of Telangana and Andhra Pradesh.

The Yellampally reservoir, where the water level has dropped to 459.25 feet, is seeing an inflow of 472 cusecs against an outflow of 587 cusecs.

However, the Hyderabad Metropolitan Water Supply and Sewerage Board (HMWSSB), which is the nodal agency for supplying water to the city, says that there is no cause for concern, and expects to tide through.

Speaking to #KhabarLive, HMWS&SB Director (Technical) V Praveen Kumar says that 2,100 Million Litres Per Day (MLD) of water was being supplied to the city. “We have supplied this water throughout summer, even during the Assembly and Lok Sabha elections in the state,” he says.

While the supply has not been affected so far, it may soon happen due to the rainfall deficit. “The reservoirs are depleted and need to be replenished as we have been using the water. As monsoon has not been active in Telangana so far, we did not get the inflows that we expected,” Praveen adds.

Besides Nagarjuna Sagar and Yellampally, the twin balancing reservoirs of Osmansagar and Himayatsagar on the outskirts of Hyderabad also chip in to meet the water requirements of the city. However, the Manjeera and Singur reservoirs, which supplied water to the city for many years, are now dry. As a result, no water is being pumped from the two dams.

Urgent need to improve groundwater level
The city already witnessed an extremely harsh summer as temperatures soared and the demand for water increased heavily. As groundwater levels dropped significantly, the demand for tankers increased, so much that the HMWSSB stated that over 20,000 requests for tankers from citizens were pending at one point.

The water board now says that the sporadic spells of rain in the city have provided temporary respite.

However, he adds that rainfall deficit has also resulted in depleting groundwater levels.

“Only continuous rainfalls can improve the groundwater levels; heavy rainfall for short periods will not replenish the groundwater,” says Vijay Kumar.

He points out that last year, too, Telangana received rainfall in only September. “If we get good rains in August and September, we will have no problem,” he notes.

The rainfall deficit is a common scenario across the state, as only very few districts have received normal rainfall so far. In fact, just last week, Telangana’s Agriculture Department said that crops sown in Telangana have seen a drop of 2% in June, which constitutes several lakh hectares, due to poor rainfall.

Find local solutions, act soon: Expert
While the HMWSSB is looking at mitigation and plans to tackle water crisis one year at a time, experts warn that a much larger problem looms over the city, which will only get worse with each passing year.

Dr Harish Gupta, Assistant Professor at Osmania University’s Department of Civil Engineering, points out that any region with less than 1,700 cubic meters of water per capita, annually, is considered water-stressed. If the figure is less 1,000 cubic meters, the region is considered to be facing water scarcity.

However, in many cities, including Hyderabad, the figure is less than 500 cubic meters of water per capita.

He attributes this to a variety of reasons: From an increase in population to little replenishment of groundwater aquifers along with the absence of large rivers, which have either ceased to flow or turned into dumping grounds for sewage.

Experts have suggested that authorities, instead of pumping water from faraway reservoirs, should promote local solutions such as rain-water harvesting and recycling of sewage.

“In cities, residents are largely surviving on groundwater only,” says Dr Harish, citing data from a 2016-2017 report by the Central Groundwater Board (CGWB) of India, which reveals that the city had about 1.8 million borewells and most of them were about 300 to 400 metres deep.

Dr Harish also cited data from the Greater Hyderabad Municipal Corporation (GHMC), which reported that during the last four decades, residential areas in the city increased from 10% to 44%, whereas vacant lands reduced from 38% to 2%. The massive decrease in vacant land also results in lesser space for groundwater to be replenished.

“The data shown in the CGWB report, too, is from 2016-17. We may have already consumed what was available. We are going to be in deep trouble in the near future if we don’t take remedial measures soon,” Dr Harish says. #KhabarLive