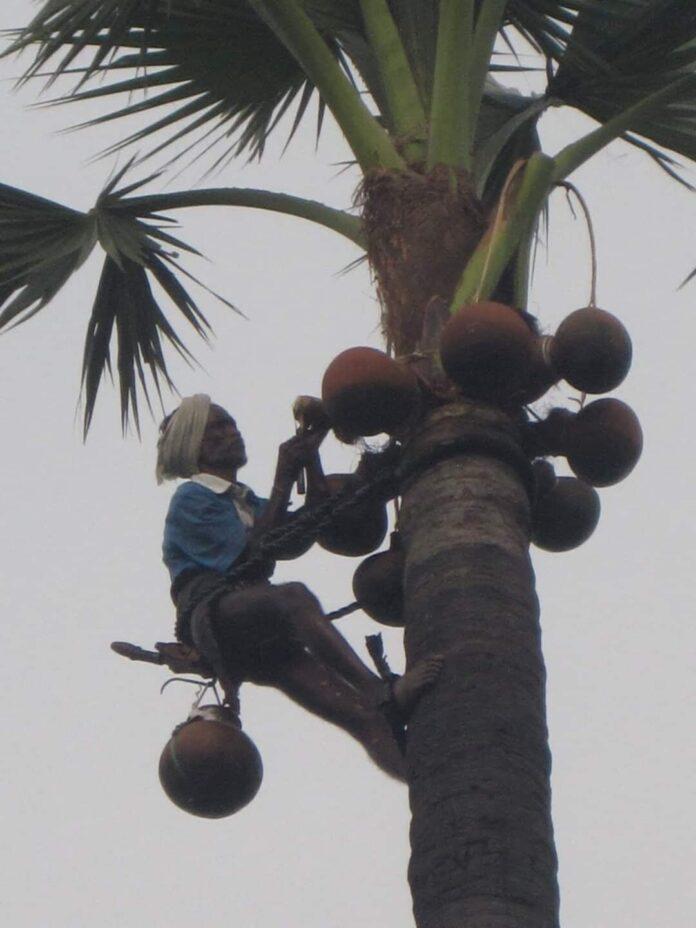 The local Palm toddy also known as ‘thella kallu’ or ‘thati kallu’ is one of the traditional beverages that people still prefer drinking to quench the summer thirst, naturally. This is available in the outskirts of Hyderabad and nearby villages.

Hyderabad city is bracing up for summer. To cope with the hot weather, people ditch oily food and alcohol and switch to cold soups and fruit juices. While street drinks like ganne ka ras, Hyderabadi lassi, falooda, chaas, goli soda, Rooh Afza, jal jeera and sharbat have made a name for themselves among summer coolant beverages.

This indigenous yet natural drink of Telangana is extracted and collected by a toddy tapper who usually belongs to the Gouda community from palm trees (thati or eetha chettu) from December to May. A skilled toddy tapper climbs up palm trees at a dizzying height of 40 to 50 metres to collect the sap from a small earthen pot tied underneath the sliced tip of an unopened palm flower. They collect it twice a day, early morning and late afternoon.

ALSO READ:  Struck Between 'OU And AAI': The Apathy Of Ronald Ross Institute Of Parasitology In Hyderabad

The taste of the toddy sap collected before the morning is sweet and feels refreshing but, in the afternoon, it ferments and turns sour. Drinking fresh toddy in limited quantities is considered to be healthy. Many believe that it holds the power to melt stones formed in kidneys and ease the digestion process. In ancient times, it was also used for curing jaundice.

However, according to some toddy tappers, the sap is losing its popularity to the Indian Made Foreign Liquor (IMFL). “In comparison to earlier days, the number of people being in favour of toddy has come down, maybe due to an increase in the consumption of beer and whisky. Most often, people who don’t have a fondness for modern alcohol beverages and health-conscious prefer toddy these days,” says Tanda Jangaiah, who has been selling thati kallu for over 20 years now at Mall Yacharam Mandal.

Also, during dry days, toddy tappers witness high demand. Youngsters from the city proceed to outskirts to have natural toddy. “Young people like tender folded leaves in which they usually get served,” he adds.

Thati kallu is also called a poor man’s rich drink. A litre of toddy is priced somewhere between Rs 40 and Rs 70. Toddy tappers sell this drink by paying a certain amount to local cooperative societies formed by members of the Gouda community. Recently, as part of the Haritha Haram programme, the State government planted over 1 crore palms, toddy palm and date palm saplings.

On the outskirts of the city and on the way to Nagarjuna Sagar, the sight of fresh toddy filled in earthen pots or bottles will grab one’s attention. Some of the famous places where one can find natural toddy are Mall at Yacharam Mandal, Khajaguda near Gachibowli, Abdullahpurmet at Hayathnagar Mandal, Koheda, Brahmanapally in Nalgonda district and Loyapally.

“Rain or shine, I make sure to collect toddy twice a day. I’m into this line of work for 45 years now and will continue doing it till my body permits. Climbing a tree to tap toddy every day is not as easy as it seems. We have to hug the tree which will be easily around 50 metres in height and climb. Sometimes, it may tear your body,” says Balraj, a toddy tapper at Abdullahpurmet.

However, young men are unwilling to join this profession. “My father is involved in tapping toddy for ages. My community is traditionally engaged in this profession. But, in this day and age, youngsters are stepping back from choosing this line of work since they are looking for comfortable jobs. Moreover, toddy tappers do not get brides easily these days,” says Vignesh, who is currently pursuing his mechanical engineering.

Most of the toddy tappers who once used to sell the sap they extracted to kallu compounds in the city stopped doing it once they realised that a few toddy shops started adulterating the drink which, in turn, causes serious health issues. #KhabarLive