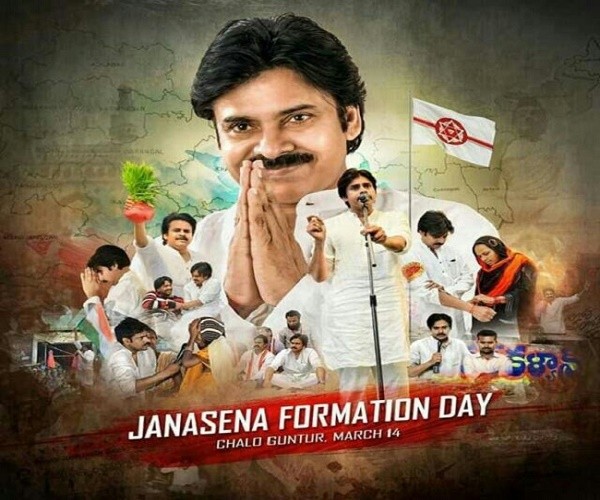 The fourth anniversary of Jana Sena, expectedly, set the tone and tenor for the 2019 general elections in Andhra Pradesh. Going by what its chief, Pawan Kalyan outlined at the public meeting, it could throw up many a scenario. All through, the political situation was fluid, no doubt, yet it was always felt that the next elections would be all about a duel.

It was to be an honourable sword fight between the present ruling Telugu Desam Party led by Chief Minister N Chandrababu Naidu and the YSRCP chief, Y S Jagan Mohan Reddy. There was always this speculation regarding the Bharatiya Janata Party dumping the Telugu Desam and joining hands with the YSRCP too. The latter, in fact, should blame itself for the alacrity it showed in cozying up to the BJP at the Centre through various means.

It had always been interpreted as an intermittent effort on part of Jagan Mohan Reddy to woo the ruling BJP to tide over his DA case crisis. Jana Sena or for that matter, Pawan Kalyan, who was a part player in the 2014 general elections, however, had his role in foisting the Telugu Desam to power.

His silence was not eloquent as several questions were raised during the last four years over the reluctance of the TDP to take on the BJP over the promises made to the residuary State of Andhra Pradesh following the AP Reorganisation Act, 2014 that robbed AP not only of the avenues of resources but also that of the all-important capital. Pawan Kalyan, going by his own words, was always kind to the Chief Minister, as the State was a nascent one and needed an experienced hand to guide it.

Kalyan declared at the public meeting that he had been benevolent enough to condone several wrongs of the Chief Minister, including that of the ‘vote for note’ case that troubled the Babu enough. Now whether that would go down well with the people of the State is to be seen. That Pawan Kalyan is still a novice to the political thinking process of the democracy became clear and also the fact that he could be politically incorrect in advising people to accept money of the other parties to vote for him. Now this calls for trouble.

The advisors of Pawan Kalyan should have warned him against such statements. Is this how a fight against corruption begins. People know pretty well how to judge the Telugu Desam for its omissions and commissions. If voters think that the ruling party is corrupt, they would teach it a lesson. It is alright to say that the Telugu Desam colluded with the BJP or that it is corrupt.

Yes, as he has done, it is also alright to say that the family members are corrupt. But, he has crossed the Lakshmana Rekha in asking people to accept money. No Pawan Kalyan garu it is just not done. You have promised clean politics! Playing to the gallery is OK, but he should not have said it. Pawan has to still learn his lessons, though his performance was good this time around. #KhabarLive

#Electioneering: How To Woo The Urban Voter In India?