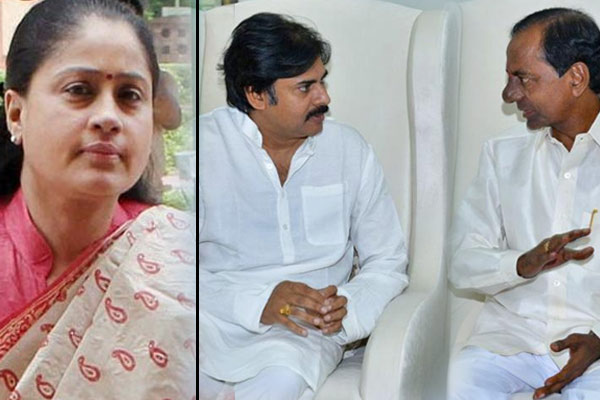 Former BJP leader and also former TRS leader, and a former MP, actress Vijayashanthi lashed at Pawan Kalyan for his recent tour in Telangana region. After going into hibernation for a long time, finally this dynamic lady politician decided to get active in politics, first by targeting the Janasena President, it looks.

“There is no need of Pawan Kalyan in Telangana politics. It will be better he limits his presence to Andhra Pradesh. If he continues his twin-eyed policy like his brother Chiranjeevi, he will have to shut the party soon” commented Vijayasanthi, a Telugu news channel reported. Also, the channel said that the Congress leader will plunge into active politics very soon.

“Actually I’ve decided not to contest in upcoming general elections, but Rahul Gandhi asked me to stand in polls. I’ll be doing whatever the high command asks me to do now. May join Chiranjeevi as well to campaign for the party as we are in Congress party now” she added, as said by the channel.

Talking more about Pawan Kalyan, she is said to have asked, “Why is Pawan praising TRS and KCR’s governance as smart? Pawan was the one who criticised KCR when Telangana state is formed, but he’s singing his tunes now. Very soon the secret nexus between these two will be exposed”.

While her comments on Pawan Kalyan are political, one wonders what is Vijayasanthi doing all these days when KCR’s ruling is not so fine in Telangana? After nearly three years of inactivity, why suddenly targeting Pawan if not to claim back some instant fame? asks political observers. #KhabarLive