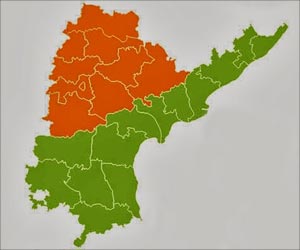 Till the other day, it seemed like there was a sort of peace and tranquillity across the political spectrum in both Andhra Pradesh and Telangana State.

However, in some dramatic overnight twists and twirls, the pendulum is moving hither and thither and at such a rapid pace that it is indicative of a possible lull before the storm, a storm that could alter equations to hitherto unfathomable levels.

It was almost a foregone conclusion that the ruling parties were so firmly ensconced in the seat of power that the presumption was that the Telangana Rashtra Samithi (TRS) and the Telugu Desam Party (TDP) would retain power in Telangana State and Andhra Pradesh without much ado or sweat.

Although, TDP has a formidable challenge in the form of YSRCP, it was felt that the TRS would have a cake-walk in its bastion. However, presently change is in the air. As all parties go into election mode, it now appears that the political scenario is fast changing given the undercurrents and the postures being adopted by each contender, consequent to which thick political smog prevails in both States.

Call it survival instincts or the obsession to hang on to power, most parties, as part of a revised strategy, are sending feelers in one form or the other to even those with whom they would never have preferred to have a truck in the first place. Zeroing in on winnable alliances is the buzzword!

There is almost a mad scramble to work out such friendly ‘pacts’ given the overwhelming feeling that the BJP-NDA government at the Centre is likely to go in for General Elections in October. Nine months are too short a period for any political entity to change gears and hit the electoral bull’s eye. Coming to the brass-tacks, the BJP was dealt a massive blow to its aspirations of emerging as a viable alternative to TRS in Telangana State.

In a way, its prospects nosedived because the alliance with the TDP had an adverse impact. Even the central leadership of BJP has given up on its hopes of making the next elections a keenly contested TRS vs BJP showdown. It’s well chalked-out Telangana Vimochana Yatra; protests highlighting the brutalities during the Razakar movement; agitations against redesigning of irrigation projects and strongly opposing 12 per cent reservation for Muslims did not help the party to gain ground, not even by a miniscule percent.

The much-trumpeted tours of national President Amit Shah failed to galvanise the party cadre to the expected levels. To add to its woes, the TDP, which once ruled the undivided Andhra Pradesh with a monopolistic stranglehold, is almost extinct in the region. The fading away of its glimmer of hope, A Revanth Reddy, sealed its fate, once and for all.

The Congress party was virtually written off by the TRS. It is believed that many of its leaders are contemplating to cross over to the pink party. Adding to the discomfort, TPCC president N Uttam Kumar Reddy has not been getting the kind of support he should have got from the senior leaders.

In the last four years, the TRS opened the floodgates with its ‘Operation Akarsh’ that has successfully weaned disgruntled, but important, leaders from almost all ‘opposition’ parties to its fold.

But then as indications about early elections gained credence and with the Centre dilly-dallying on increasing the number of Assembly seats as mandated by AP State Re-Organisation Act, the migrant leaders are on tenterhooks unsure about whether they would get a party ticket to contest the next elections or not.

Given this fluid backdrop, the AICC think-tank has directed its State unit chief to capitalise on the situation to the advantage of the party. The first coup he engineered was accomplished with the entry of fire-brand working president of TDP, Revanth Reddy. This has helped the party in getting an orator, who could take on K Chandrashekar Rao at his own game, word for word.

The ‘prized’ catch has sent messages to the migrant leaders in TRS, who were feeling suffocated as they were not getting importance either in party hierarchy or in landing up with plum government posts. While it remains to be seen whether the ‘close-on-the-edge’ leaders would join TPCC or not, it has, at least, helped in putting a check on the possible party exodus into TRS.

Buoyed by the success, the TPCC has now worked out another action plan to strengthen the party at the grassroots level. It is now focussing on identifying local issues in each constituency right up to the mandal level besides identifying problems faced by the locals. Coming up with possible constituency-wise solutions to such grievances will be next on the agenda. The AICC high command wants to utilise the services of Vijayashanti for campaign in the bid to reach out to and win over the people as a means to firm up a TRS-Congress straight contest, next time around.

The findings of various surveys commissioned by TPCC have given findings that are bolstering their electoral preparedness-they have greater chances of improving their seat share, although they are not in a position to actually unseat the ruling party. Developing from this solid ground would be the firm resolve of the party as it sharpens its weapons, is the understanding doing the rounds.

Political analysts say this likelihood has come as a rude wake-up call to the TRS leadership and compel them to rework on its strategies. The problem before it is that the Centre has not honoured its delimitation promise. As a result, the party will have to do a tight-rope walk while finalising candidates and potential winners. If the migrant leaders are not given tickets, there is a possibility of internal sabotage or many quitting the party at the eleventh hour, which could send wrong signals to the electorate.

This, ostensibly, was the driving force behind ‘enticing’ Pawan Kalyan as Jana Sena would split the anti-TRS votes and give it the advantage, a la Praja Rajyam for YS Rajasekhara Reddy, earlier on. The recent meeting between the Power Star and KCR and his tours of Karimnagar and Khammam districts has given credence to this talk.

In Andhra Pradesh, a possible split between the TDP and the BJP cannot be discounted, though top leaders from both parties deny any such ‘discontented’ polarisation. There is a strong possibility that the BJP would demand around 40 per cent of the Assembly seats, which Chandrababu Naidu may not oblige. This could possibly trigger talks of charting individual routes.

If such an eventuality does surface, then the BJP might sail with the next best bet-YSRCP, which, in its bid to corner power, would be willing to ‘sacrifice’ some seats, including up to 35 per cent of the seats. But then the question is whether the BJP has the capacity, and the leaders, to win 35 seats, or thereabouts, in the State, irrespective of with whom they ride piggyback? The wily Naidu will certainly dangle this when he sits for talks with the BJP central leadership and caution them against nursing such lofty ambitions.

The comments of YS Jaganmohan Reddy that he is ready to walk and work with BJP if they announce special status to the State and the announcement by his trusted aide Vijay Sai Reddy that YSRCP MPs would resign from the Lok Sabha after the Budget Session to put pressure on special status followed by AP BJP Floor Leader Vishnu Kumar Raju’s comments that that it was unfortunate that the turncoats of YSRCP were taken in as ministers, when pieced together, give out contrasting pointers of the things to come.

However, Raju’s remarks (read it as U-turn) have assumed political importance as he has always advocated employing a soft-stand towards the TDP. These developments have made the TDP sit up and give a serious thought.

Politics being ever dynamic, the smog that has engulfed the two States is likely to clear only after June. Meanwhile, each stakeholder is busy working on the equations in the quest to catch the bus and ride home the winner, rather than get dumped midway in no man’s land or at the crossroads! Either of them could sound the political death-knell. #KhabarLive

Many Voters Find Their ‘Names Missing’ From ‘Electoral Rolls’ During Lok...

The ‘Dying Art’ Of ‘Papad Making’ Industry At Dhoolpet Area In...