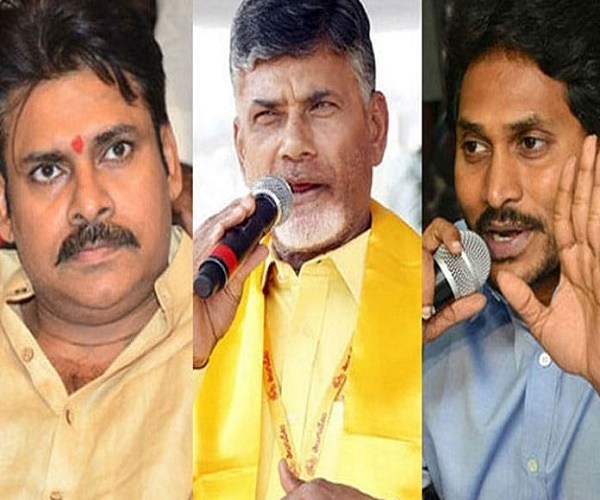 Politics in Andhra Pradesh is taking several twists and turns and is even putting Tollywood potboilers to shame. As the elections are drawing closer, one would witness more and more of verbosity and attempts to hit below the belt. Prime Minister Narendra Modi, at every meeting, in his inimitable style dramatises the efforts of the Opposition parties to stitch an alliance and finds fault with them for coming together giving a go by to their ideologies and saying they have a single-point agenda to defeat Modi.

In Andhra Pradesh exactly the reverse is happening, albeit in a little different style. While at national level all anti-BJP parties have come out openly and have made it clear as to who stands on which side of the battlefield, in the residual State of Andhra Pradesh dirtiest politics are being resorted to. So far, what was considered to be a direct fight between the TDP and the YSRCP has now changed its course and now it has turned out to be like a meandering river.

As the BJP has realised that it has no ground in Andhra Pradesh and with bitterness the TDP reaching a new high, the BJP seems to have chosen two partners – the YSRCP and the TRS – to fire its guns over their shoulders.Making all out efforts to defeat the rival party is a normal thing but what is happening in Andhra politics is certainly a dangerous trend. Never did one see the ruling party of one State taking keen interest in the electoral politics of the neighbouring State without being a contestant in that State.

Never did anyone send Ministers to needle in the affairs of another State. It is a fact that Andhra Pradesh Chief Minister N Chandrababu Naidu vigorously campaigned in Telangana during the Assembly elections held a couple of months ago but that was because his party was a contestant and the TDP was in alliance with the Congress and other parties.

Accusing the government of the day of having failed in fulfilling its promises and accusing the leadership of the ruling party is a normal thing. We have seen in every Lok Sabha elections that the Opposition accusing the Prime Minister in harshest possible manner.

This is something which was never seen before. Now we have seen that in the guise of attending functions in Andhra, former Telangana Minister for Fisheries T Srinivas Yadav who till five years ago was an arch critic of his present boss has been parroting what KCR had said about Naidu.

Now the allegations are that the TRS is fighting a proxy war on behalf of the BJP. Of course, theTRS has strongly refuted this charge. But then it continues to say that it would fulfil the promises made by the Chief Minister to give a return gift to Naidu.

Despite denials that the TRS was helping the YSRCP, the sequence of events clearly indicate that there is some understanding between the YSRCP and the TRS to take on the TDP in Andhra Pradesh. Now the latest allegation by the TDP is that while it is fighting its battle from Andhra Pradesh, the YSRCP and the BJP are playing Hyderabad-centric politics. The developments do give credence to these allegations. Suddenly, one MLA and one TDP MP switched loyalties to the YSRCP.

Another MLA from East Godavari Thota Trimurtulu is also likely to join Jagan’s party. While the migrants suddenly realised that all was not well with the party when they were told that they will not get tickets, there are others who have been with the party for donkeys’ years and are perhaps proving to be hard nuts to crack. The TDP now alleges that its leaders who have business interests in Hyderabad are either being arm twisted and forced to join the YSRCP or are being issued notices from Central agencies like Enforcement Directorate.

The latest case relates to an MP who got a notice asking him to explain why he had given a cheque to the former Union Minister P Chidambaram. The cheque was issued about 14 years ago. Chidambaram is accused number one in the Aircel Maxis case which relates to alleged irregularities in grant of Foreign Investment Promotions Board (FIPB) approval. It is unfortunate that this time the elections, instead of revolving round issues and performance and promises of the ruling party, are being plagued by undemocratic methods being crept into politicking.

The country has witnessed many fiery speeches from some of the top most leaders including the iron lady Indira Gandhi, Atal Behari Vajpayee, Hemavati Nandan Bahuguna, George Fernandes whose oratory skills were par excellent. There used to be fire in their speeches, pun in their rhetoric, but never the kind of speeches which are being heard now. While trying to show their opponent in poor light based on their performance, these leaders used to make an attempt to convince people about the capabilities of the parties they represented.

But never did one see or hear them hitting their rivals below the belt. Now the funda appears to be that to confuse the people because they have nothing to convince. It was shocking to hear Amit Shah accusing the Chief Minister of a State of trusting Pakistan PM and not the PM of India. Apparently, he was reacting to the statement of Chandrababu Naidu that Modi as Gujarat Chief Minister said the then Prime Minister Manmohan Singh should own responsibility for terrorist attacks in Kashmir and quit and the same applies to Modi now.

A strong retort could have been considered a natural thing but accusing a CM of believing in the Prime Minister of Pakistan is something which is not expected of a president of a national party and that too when there was no such reference in the statement of Naidu. It seems someone who translated Naidu’s statement does not know either Telugu or Hindi properly. Amit Shah too should have got it clarified whether really such a statement was made or not. No leader whoever it may be, should not think that they can say anything and get away.

ALSO READ:  Why An IAS Officer Suspended For Doing His Election Duty?

No individual in this country should think that only he is the epitome of patriotism. Unfortunately, Amit Shah tried to project that only he, Modi and his party are the ultimate symbols of patriotism. Is it not stooping to lowest level in politics just to attack political rivals? Amit Shah should ponder over it before advising all others not to stoop too low and use Pulwama issue for political purpose. The TDP now is trying to convert this into a fresh attack on the Telugu self-respect.

Preaching morals to others won’t help. One should also practice it at least to some extent. This is what all political leaders should first understand. The BJPs strategy as far as Andhra Pradesh is concerned seems to have adopted single point strategy. Attack TDP. So far it has not done anything that could make the people think that BJP has helped the State.

Amit Shah has visited State for second time in the last one month and Modi who addressed a meeting at Guntur is now scheduled to visit the State again in March. They continue to say that they have done all that has been promised but are not in a position to explain clearly what they mean by saying that everything has been done and how different it is from what they have done for other States.

The social media has become another menace. Political parties are using it to defame their rivals with fake news and videos as well which could result in raking up unnecessary sentiments and may even spark violence.

If political parties do not change their attitude and set abstain from setting such wrong precedents, elections will become a stage when people will be tempted to press the NOTA button and that may get absolute majority in terms of votes and not political parties. #KhabarLive