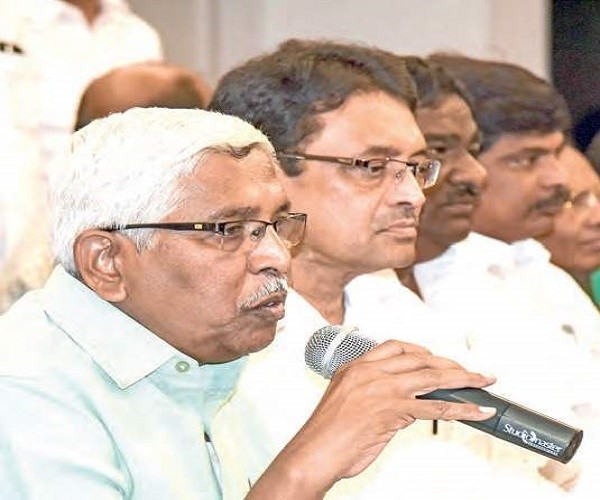 Telangana Joint Action Committee (TJAC) chairman M Kodandaram has taken a political avatar to play the role of Telangana’s Arvind Kejriwal for the Aam Aadmi (commoners) of the new State.

The Political Science professor, who acted as a guiding force for the Telangana Rashtra Samithi (TRS) during the final phase of statehood movement, on Monday announced the launch of a new political party, “Telangana Jana Samithi” (TJS), amid thunderous applause from TJAC cadres.

Flanked by political veterans, senior advocates, professors and leaders of various students’ unions who had earlier worked with him in the Telangana movement, a calm Kodandaram announced the birth of his new party in a crowded press conference at a hotel here.

He said the party would contest the ensuing Assembly polls, scheduled to be held in 2019 April/May, all alone to oust the TRS government and also to cleanse the present political system. “We will contest the elections all alone. We are not ready to join hands with any other political party,” he said.

“The State government has ignored the aspirations of Telangana people and objectives of the statehood movement. People’s movements are completely suppressed. Chief Minister K Chandrasekhar Rao has confined himself to his official residence, Pragathi Bhavan. He has become inaccessible to people.

I think KCR is the only CM in the entire country who never goes to the Secretariat and keeps himself aloof,” Kodandaram fired salvos at the Chief Minister, for whom he was “ideological advisor” during the statehood movement.

“As the KCR government has miserably failed on all fronts and the CM is ruling the State like a tyrant, we have no option but to launch a new political party to realise the dreams of Telangana martyrs, who laid down their lives for achieving statehood. Our aim is achieving Samajika Telangana, wherein people belonging to all sections of society will enjoy the fruits of the new State and social justice will prevail,” the 62-year-old-professor said. He said the new political outfit would strive hard to bring in a fundamental change in the political system so as to eliminate political corruption and uphold the Constitution and democratic values.

Kodandaram said the party flag would be released and unfurled on April 4. A public meeting will be organised in Hyderabad on April 29 to tell the people about the objectives of the Telangana Jana Samithi (TJS).

The former professor made it clear that despite he taking political avatar, the TJAC would continue to remain as an apolitical organisation in Telangana to play the “watchdog” role in the State.When wanted to know whether he would contest the next polls, Kodandaram said his party would decide on this in the coming days.

It would not be a cakewalk for Kodandaram, taking on established political parties like TRS and Congress, which have money power and are also strong at grassroots level. When asked about this, Kodandaram said, “I don’t think crores of money is needed to build a political outfit, which would be a voice for ordinary people. AAP’s success is a classic example of this.”

The professor said that “Reinventing Politics”, a book written by Vladimir Tismaneanu, on East European politics from the time of Soviet domination to the 1989-90 revolutions, inspired him to fight for the cause of commoners. “The people’s movements that were organised in East European countries and Latin America gave many lessons to politicos,” he said. #KhabarLive

Will Telangana Selects Congress Over TRS In Elections?

How An ‘Infosys Engineer’ Became Rich ‘Bitcoin Miner’ And Then A...

In Midst Of The ‘Big Political Karnataka Scrum’ Is This ‘Hijab...