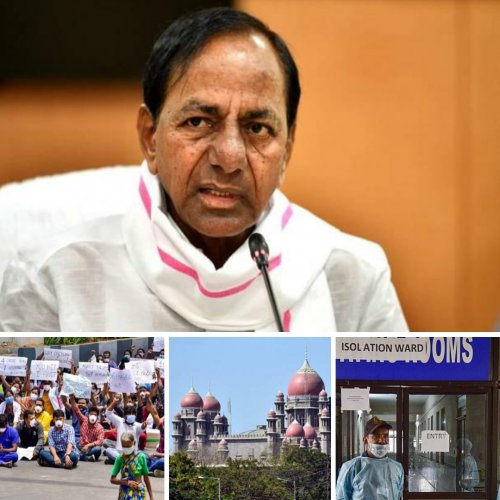 Barely 24 hours after the Telangana government came out all guns blazing against the media for “false reporting” of its handling of the COVID-19 crisis, a protest by doctors at the only hospital to treat coronavirus patients in the state saw many of its claims come undone.

Recently, a junior doctor at Hyderabad’s Gandhi hospital was attacked by relatives of a COVID-19 patient who died earlier that day. Hours later, nearly 300 doctors at the hospital started protesting.

Though the initial demand was for police protection, it soon expanded to include other concerns. Doctors also wanted adequate provision of personal protective equipment (PPE) and for the strain on staff to be relieved by sending some patients to other hospitals.

A day before the protest, a press release issued by the chief minister’s office chastised the media for reporting exactly these concerns. The release quoted unnamed state medical and health officials expressing “anguish” at “some media organisations and persons” for spreading “false information and creating panic and confusion” about the government’s capacity to handle the pandemic. They even hinted at the possibility of a “conspiracy behind this malicious propaganda”.

The release also spoke of the availability of beds in hospitals and that the government had ‘adequate stocks’ of PPE. While these statements may be true, what becomes evident from the doctors’ protest is that this is insufficient to tackle the pandemic.

The ‘stocks’ of PPE do not seem to be reaching the health workers, as the state government itself has admitted that 153 staffers did indeed contract the viral infection. (Strangely, the CMO release terms reports that medical staff in the state have contracted the virus are ‘false’.)

The Telangana high court has also expressed disappointment with the government for repeatedly saying that they have lakhs of PPE kits in “stocks”. It said stocks are irrelevant and “it is only distribution to the medical staff which matters”.

Beds at hospitals may be vacant, but that does not mean staff is equipped to handle the load of patients. And when medical workers are overworked, the risk of getting infected is higher due to their exposure to contaminated surfaces and close contact with severely sick patients.

The fact that Gandhi Hospital is the only one designated for COVID-19 patients in the state is having a domino effect on the other government hospitals. At the Osmania General Hospital (OGH), the other large government-run hospital in Hyderabad, a rotation policy was introduced after it emerged that many PG students had contracted the coronavirus. Doctors say that because Gandhi Hospital is now solely handling COVID-19 patients, OGH is also overburdened. “All [non-COVID-19] cases are being shifted there. This is resulting in overcrowding. And physical distancing is becoming impossible”.

While K. Chandrashekar Rao’s office has been taking potshots at the media, the government itself has been accused of obfuscation. Journalists have complained that the government’s daily COVID-19 bulletin makes it extremely difficult to gauge new cases. On May 27, when the state recorded a high of 107 new cases, the health department changed the bulletin’s format, adding new rows and not providing the aggregate. The flow of information has also been one way, with officials either being inaccessible or refusing to answer questions posed by the media.

In the same press release, the government also trained its guns on civil society members who have filed public interest litigations (PILs) seeking accountability from the government.

The state has been devoid of a strong opposition ever since the Telangana Rashtra Samithi (TRS) first came to power in 2014. KCR has been accused of engineering defections, particularly from the Congress. In this scenario, citizens have been turning to the judiciary for transparency and accountability.

“All these PILs are filed with vested interests. This is leading to senior medical officers wasting their valuable time,” the state government release claimed, seemingly taking a leaf out of solicitor general Tushar Mehta’s playbook.

The statement did not express who or what these ‘vested interests’ were. Most of the directions sought in the PILs overlap with the concerns expressed by the doctors – providing PPE to medical workers and relieving the strain on hospitals in Hyderabad. Other concerns include providing foodgrains to migrant and daily-wage workers.

The PILs have also sought an increase in the rate of testing. Telangana has the lowest testing in the country, testing only 589.5 people per million population as of June 8.

The KCR government has consistently refused requests to ramp up testing, taking cover behind the claim that it is following guidelines issued by the Indian Council for Medical Research (ICMR). While these guidelines should be considered good practice, they do not limit the government from testing more, especially in containment zones. In Delhi and Mumbai, the authorities have gone beyond ICMR’s guidelines, testing asymptomatic patients as well.

Perhaps, the state government was irked that it suffered a setback when the Telangana high court struck down its order directing hospitals not to test dead persons for COVID-19.

Amid claims of the state government underreporting COVID-19 cases and deaths, the high court had asked for blood samples to be collected from dead persons to verify if they had the viral infection.

Even after the high court waved the threat of contempt charges, the state’s health department officials say it is ‘difficult’ to implement the order.

This refusal to implement the court’s order needs to be seen in the context of the KCR government’s purported policy of protecting its officials from contempt charges. The word in the bar is that officials have been assured from the highest levels of government that they need not worry about court-imposed penalties.

Even judges seem to be aware of this, with one telling the that “it appears as if the officers have assurance from the advocate general’s office and the state government that they will be protected if the court issues contempt orders and penalises them”.

Recently, KCR ridiculed the BJP-led Central government for its fiscal stimulus package. He termed the relief measures ‘pure cheating’ and accused the Centre of treating state governments as ‘beggars’. In the past too, he has been critical of the BJP’s Hindutva agenda.

However, his readiness to accept tactics spearheaded by the Narendra Modi government — muzzling the press and chipping away at the judiciary’s independence — shows that while he may be ideologically opposed to the BJP, that does not prevent him from mimicking its authoritarian methods. #KhabarLive #hydnews