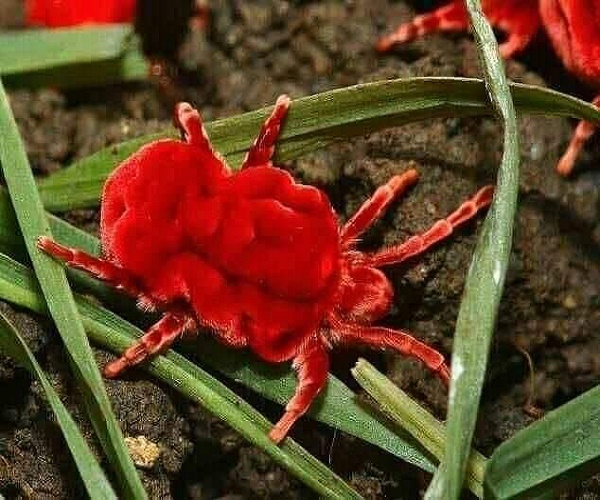 The soil-friendly Arudra Purugulu, a breed of rare insects with velvet crimson body that appears exclusively in Arudra Karthe after the first rains in farms of Telangana, are being purchased by some agents reportedly associated with Ayurvedic medicine industry at Rs. 600 per kg illegally.

Trombidiidae, known as red velvet mites, true velvet mites, or rain bugs, are arachnids found in soil litter known for their bright red color. Red velvet mites are active predators as grown adults but as early instars are often parasites on insects and some arachnids. They are sometimes mistaken for spiders.

More than 2,000 species of mites exist, so it’s no surprise that the insects come in all shapes, sizes, and colors. But there is no mite quite like the red velvet mite. Because of their unique color and consistency, red velvet mites instantly catch the eyes of humans and animals alike. The mites are also called rain bugs because of their tendency to appear after a rainy day or evening.

The oil from the red velvet mite Trombidium grandissimum (Arudra Purugulu) is used in traditional Indian medicine to treat paralysis. Also, considered as an aphrodisiac, Trombidium mites are referred to in several websites as Indian Viagra. These agents have made some villages in Alair, Yadagirigutta, Rajpet, Turkapally mandals as their home to collect the Arudra Purugulu. Since the collection of Arudra Purugulu is fetching more money than daily wage, for over a week now a large number of laborers and farmers have lined for picking them.

The agents have appointed one sub-agent in each village in these parts of the district to collect the insects from laborers.

A laborer at Saigudem village of Alair said that sub-agents are being paid Rs. 1,500 to Rs. 2,000 per kg by the agents of industries. However, the laborers had no clue why the agents are buying Arudra Purugulu. Since the Arudra Purugu is very crucial in maintaining the soil fertility and controlling the pest on crops, the development is worrying about the farmers and agriculture officials.

An agriculturist in Yadagirigutta said that Arudra insect feeds on the harmful pests at the larva stage to help the farmer to control pests. On the condition of anonymity, a sub-agent said that the agents boils the insects alive and pack into kg bags after drying up for transportation to Bangalore, Mumbai, Kolkata, Hyderabad and some other Arab countries. The farmers and agriculture officials want the State government to take stern action against the mafia to protect the insects.

Agents scout Nalgonda villages to buy red velvet mite which is considered as an aphrodisiac and also used in Ayurvedic medicines.

Red velvet mites benefit humanity. They are part of a family of soil arthropods that aid the ecosystem. By feeding on smaller insects, red velvet mites keep the numbers of invasive insects in check and prevent them from destroying vegetation. In addition, eating insects that feed on bacteria and fungi extends the life of bacteria and fungi, which are among the most important decomposers of organic waste in soil ecosystems. #KhabarLive #hydnews

Is It Good For New Entrepreneurs To Enter Into The ‘Pharma...

The Indian Pizza Delivery Company Is On ‘Fire’