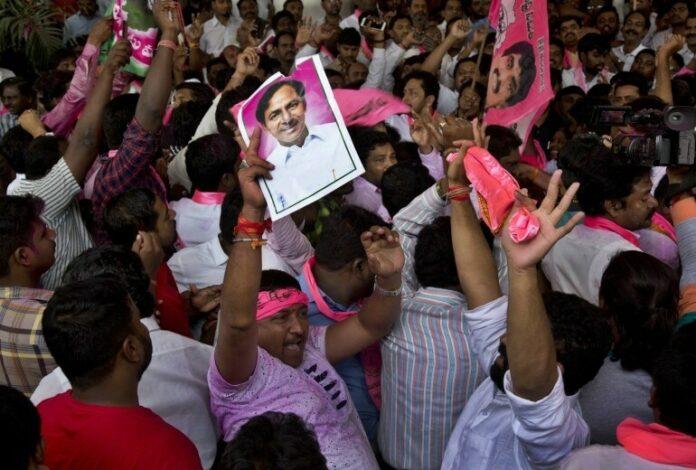 In line with the anticipation of TRS chief K. Chandrashekar Rao, the ruling party is faced with high rebels trouble. Denied party tickets, aspirants turned dissidents swung into action and entered the electoral fray for the Urban Local Bodies (ULB) as rebels across the state, even as several aspirants have quit the party altogether.

The TRS is facing a major trouble in Mahabu-bnagar district, with more than 50 candidates turning into rebels in the Kollapur and Alampur municipalities. Jupally Krishna Rao, former minister, gave a shock to the ruling party by issuing B forms to 20 of his followers to contest in 20 wards in the Kollapur municipality in Mahabubnagar from the All-India Forward Block party.

A former TRS ZPTC member, who is a rival to local TRS MLA Abraham in Alampur municipality, has fielded his followers to 10 wards as independent candidates. In Ieeja municipality, about 20 opponents of MLA Abraham have decided to enter the fray as rebels.

Ms Ch Jayasri, a TRS former corporator in the Karimnagar municipal corporation, and Ms V. Jyothi, Karimnagar urban director quit the TRS and joined the BJP after they were denied party tickets.

D. Dayakar Reddy, aspirant for the mayor post for Peerzadiguda municipal corporation, has quit party in the morning and joined the Congress in presence of Malkajgiri MP A Revanth Reddy. The Congress MP immediately announced Mr Dayakar Reddy as mayor candidate of Peerzadiguda on behalf of his party.

After coming to know that Dayakar Reddy had quit the party, labour minister Ch. Malla Reddy visited his residence to convince him to reverse his decision.

TRS leader attempts suicide in Medak – After having discussions with the minister, the dissident leader returned to TRS, with an assurance that the B forms would be given to 18 of his followers.

Goda Krishna, former corporator of Medak municipality, attempted to commit suicide after being he denied a seat. He tried to set himself ablaze by pouring petrol at the TRS camp office in Medak town. His followers, however, averted the attempt.

In the Bandlaguda municipal corporation, Manikonda village TRS president A. Srikanth, who was aspiring to a party ticket to contest as corporator, went underground after he was denied a ticket. Former sarpanch V. Anjaneyulu, who is the TRS party leader of Himayath Sagar village (now Bandlaguda corporation) and former MPTC Ms. Shobha quit the TRS after they were denied the tickets and joined the Congress.

In Badangpet, R Santoshsri Srinivas Reddy, former Corporation councillor, resigned and joined the Congress after the TRS denied a ticket to him for Gurramguda village (now in Badangpet). Former sarpanch Jakkidi Jangareddy also quit the TRS to join the BJP.

All rebels are now confirmed to stay in contest after minister A Indrakaran Reddy announced Eashwar as TRS official candidate for the post of chairman of Nirmal municipality. Eashwar had already served as chairman of Nirmal municipality. In Tandur municipality, followers of MLC P Mahender Reddy and MLA Pilot Rohit Reddy filed nominations for 36 municipal wards in the town as both the MLC and MLA fighting hard to getting tickets for their henchmen. #KhabarLive