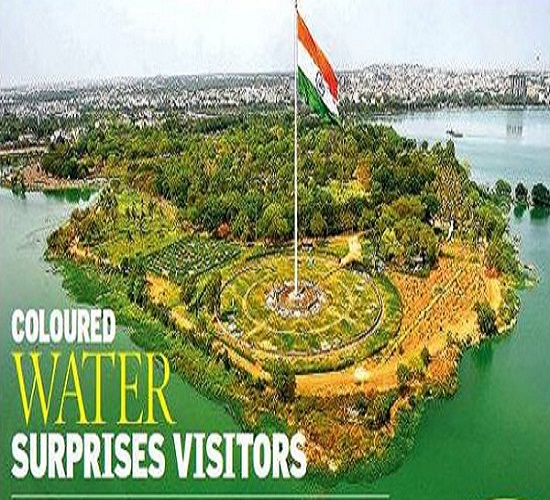 After frothing for the first time two months ago, Hussainsagar is now turning green, thanks to algal bloom.

Water in a lake turning green implies that it’s on the death bed. Large swathes of algal bloom were noticed on Sunday, particularly around the lake bund, on all sides. Analysis of samples collected in the last five years reveal that pollution in Hussainsagar, built 455 years ago, has been rising, taking the lake nearer to what experts term ‘limnological death’.

Recent research studies reveal that heavy pollution has resulted in high nutrient content in Hussainsagar, leading to the algal bloom. As summer approaches, algal swathes would only increase.

Visitors to the lake on Sunday were surprised on seeing the green water as they have been accustomed its foul stench but not “coloured” water.

Limnologists or experts in lake studies said that heavy presence of chlorophyceae algae is giving water the greenish tinge.

Already Saroornagar lake, a heritage water body like Hussainsagar, is changing colour from green to blue with seasons. A similar phenomenon is in store for Hussainsagar.

A study by researchers from the department of zoology and the pharmacognosy and medicinal plants laboratory of Osmania University published in the recent issue of the International Journal of Scientific Research in Science and Technology revealed that the water quality in the lake has been deteriorating over the years in most of the parameters that govern water quality index.

Though the study was primarily meant on treating the highly polluted Hussainsagar water using a patented purifying technology, data collected by the researchers present a sorry state of affairs.

The researchers concluded that the polluted Hussainsagar has “shown high values except for nitrite radical concentration. These results indicate that Hussainsagar water is alkaline, less productive in nature, highly polluted and not suitable for drinking and culture of fishes”.

INTACH Telangana co-convener P Anuradha Reddy said there is urgent need to protect the historic lake. “Hussainsagar is a lake of heritage and historical value. All the encroachments in its original catchment should be removed and rain water should be allowed to freely flow into it. If this done, the lake will revive within a couple of years,” she added.

Hussainsagar’s once pristine and clear waters had inspired numerous historians and poets to extol its glory and beauty.

If British officer, city historian and author Phillips Meadows Taylor had compared the waters of Hussainsagar with shining pearls and diamonds, nightingale of India Sarojini Naidu could not resist describing the lake as a reflection of her soul.

Sarojini Naidu, in the beginning of the 20th century, wrote a poem on the Hussainsagar inspired by the white silvery water curtain formed at the outflow gate when excess flood water falls down into the stream below. Sadly, the stream is now a municipal gutter – Ashoknagar Nala – and the heavy pollutants in the water body have robbed from the sight of Hyderabadis the legendary ‘chadar’ or water curtain.

She had described the water body as the image of her soul — “O, lake, O living image of my soul.”

Referring to the poem, nonagenarian Olympian Jeelani Pairak, who created a world record by swimming in Hussainsagar hands tied for 24 hours non-stop in May 1947, told TOI that he used to see the lake bed from the surface while swimming as the water was crystal clear.

“Despite swimming in the lake for 24 hours, I did not fall ill, thanks to the potable water the lake had those days,” he recalls, adding how he got a prize of Rs 1,000 then.

Pairak, considered as the father of swimming in Telangana and Andhra Pradesh, said there used to be two pavilions on the Hussainsagar Tank Bund for people to watch swimming while music was played from the Rock of Gibraltar where the Buddha statue now stands.

“If you take a boat and go near the pavilion, you will find the steps from the bund to the lake surface. The pavilions were converted into a restaurant and a Lepakshi showroom,” Pairak said.

INTACH Telangana coconvener P Anuradha Reddy said the pavilions were recreation spots for people as they watched swimmers compete with each other. “Swimmers went up to the Rock of Gibraltar, touched it before returning to the pavilions. The only photos of pavilions in their heydays were from Central government archives, taken during the visit of Shah of Iran to Hyderabad in 1956,” Reddy told KhabarLive.

The Lifestyle Of ‘Hijras’ Are Under Sheer Societal Neglect