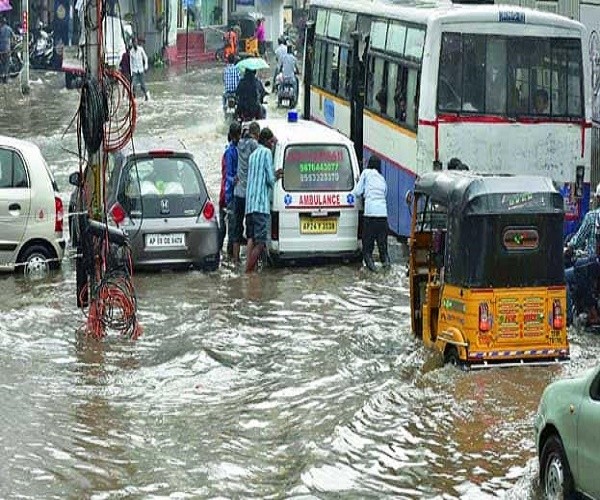 Residents of Madinaguda, Deepti Srinagar Colony and other areas near Miyapur that got inundated following heavy rainfall in the last week of August.

GHMC may have to spend ₹28,000 crore to remove encroachments on nalas
The Greater Hyderabad Municipal Corporation will have to remove 28,000 encroachments spending about ₹12,000 crore for remodelling the storm water drainage system, if the problem of water logging has to be solved in the city.

This was part of recommendations by a technical firm roped in by the civic body to study the drainage system in the city. Most of the encroachments that have to be removed fall along nalas; some buildings will have to be pulled down to create buffer zones along nalas across the length of 390 km.

According to officials, the drainage system capacity is only 20 mm per hour. This year, the city recorded over 100 mm of rain on three occasions which led to extensive flooding and traffic blockages. An earlier study had recommended widening of 71 nalas for 170 km length in the core area of the city. Out of this, the civic body has been able to widen nalas only for about 58 km.

After the recent flooding in Madinaguda, officials blamed diversions and change of contours of nalas for the disaster. GHMC officials say about 900 curves were tampered with due to urbanization, change of land use and construction activities.

The GHMC even used drones to carry out a survey of the areas in question. After the survey, the civic body identified critical bottlenecks as a result of which over 47 projects costing ₹ 230 crores for a length of 16.60 km are in various stages of implementation. Another tranche of ₹ 2300 crores. is being spent by GHMC to tackle immediate flooding problems in areas identified as most vulnerable. For this, 43 projects for nala widening have been identified across a length of 100 km.

Hyderabad has seen localised flooding in many parts of city after the big flood of 2000.

Potholes And Overflowing Sewers, The Pitiable Scene Of Vijayawada During Rains