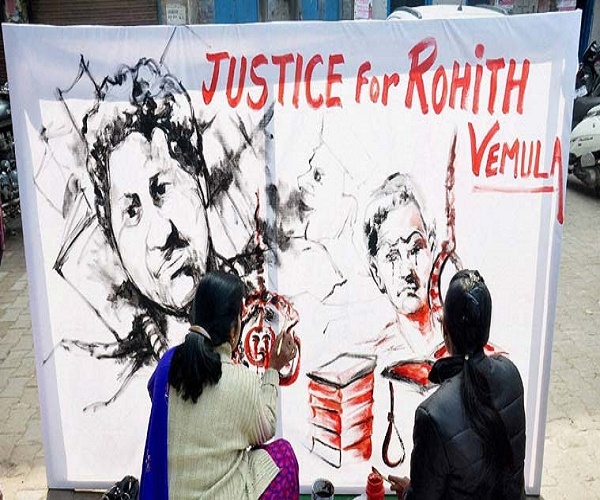 Every time the Velivada, a site of democratic protest and a symbol of resistance, has come under attack, the students have rebuilt it. The undemocratic Hyderabad University authorities is treating the issue with caste and creed basis.

It has been three years, and it seems the spectre of Rohith Vemula still continues to haunt the saffron citadels of power. On a cold and chilly winter morning, just a couple of weeks before the third anniversary of Rohith’s institutional murder, we woke up to the news of the Velivada being torn down by the University of Hyderabad administration.

However, this was not the first time that the Velivada was attacked, vandalised or under siege. Through the summer of 2016, there were multiple attempts to bring it down. Even the bust of B.R. Ambedkar was removed from Velivada clandestinely in July 2016. Days later, that of Rohith had been desecrated.

But every time the Velivada has come under attack, the students have rebuilt it. 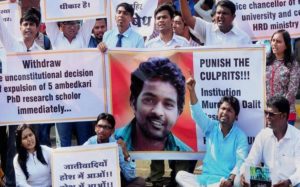 An erasure of evidence
The Velivada, literally meaning a Dalit ghetto, had emerged as a site of democratic protest and dissent since the days when Rohith along with four other Dalit students were struggling against an unjust punishment order by the Hyderabad Central University administration. The orders were of hostel expulsion and they were banned from entry into other public spaces within the university.

It effectively meant a social boycott of these five students at the behest of the Akhil Bharatiya Vidyarthi Parishad (ABVP), the BJP’s student arm. What was revealed eventually was the direct involvement of BJP MP Bandaru Dattatreya and the then HRD Minister Smriti Irani in clamping down on what they called “anti-national activities” in the university.

Dontha Prashanth, one of those five students, while addressing a protest organised by the Ambedkar Students Association (ASA) in the very spot where the Velivada stood, said that “the Velivada was a testimony for the amount of discrimination that the five of us went through”.

The five had spent days and nights at the centre of the university as a mark of protest till the day Rohith committed suicide. “As this Velivada stands as testimony to all the horrors committed by Appa Rao who is an accused under the Scheduled Caste and Scheduled Tribe (Prevention of Atrocities) Act, the act of erasure of the Velivada is nothing less than erasure of evidence,” said Prashant.

Rohith’s brother Raja Vemula, while commenting on the recent demolition, told The Wire, “VC Appa Rao, being an agent of the RSS-BJP, doesn’t want the Bahujan-Muslim students to have access to higher education. Nor does he want them to raise their just demands.”

He added, “The VC demolished the Velivada and intends to file conspiracy cases on ASA activists again so that students abandon the movement for justice for Rohith. But he should remember that he will fail again. In fact, with every such attack, more would join the movement.” 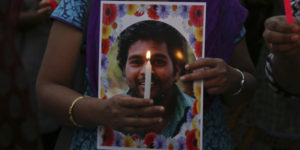 An erasure of history
The making of the Velivada by Rohith Vemula and other Dalit students from ASA was a part of and expression of history. The Velivada embodies a living history of oppression, exploitation, indignation and discrimination; a life that Rohith in his last letter describes as the “fatal accident” of his birth.

The letter, the legacy, the anguish and the responsibility that Rohith left behind, overnight turned the Velivada into a symbol of resistance. It became a rallying point for all those willing to write their own history against the diktats of the brahmanical despots. And this is precisely why the Velivada has, for the last few years, been an eyesore for the establishment.

According to George Orwell: “The most effective way to destroy a people is to deny and obliterate their own understanding of their history.”

The denial began at the very outset after Rohith’s death. The instructions from the corridors of power was clear. Even though Rohith lived a Dalit, was killed a Dalit, but they would not allow him to die a Dalit. All machinations were used to disprove and distort Rohith’s caste status so as to establish that he was not a Dalit.

Radhika’s own abuse at the hands of her husband Mani Kumar upon the disclosure of her Dalit identity, her subsequent separation and her hardship in bringing up Rohith single-handedly as a child in a Dalit locality of Guntur – nothing counted.

Through a grossly patriarchal reading, the Roopanwal Commission stripped Rohith of his Dalit identity. After all, the denial of Rohith’s past, the erasure of his lived history, was paramount for the purpose of effecting a sordid denial of justice.

But it is not just about Rohith. As far erasure or say distortion of history is concerned, they are masters of it, particularly when it comes to the question of caste. One form of erasure was attempted in the vocabulary of the oppressed itself, in the very nomenclature of “Dalit” meaning “broken people” that emerged historically from among the oppressed castes as a political expression of identity from a shared history of oppression.

In March last year, the Union ministry of social justice and empowerment issued orders to all state governments to drop the usage of the word “Dalit” in all official communications. Following suit, in last August again, a similar order was issued, this time by the Union Ministry of Information and Broadcasting to all media-houses asking them to “refrain from using the nomenclature ‘Dalit’ while referring to members belonging to Scheduled Castes”.

So, in lived reality caste oppression is perpetuated in a myriad of means through denials, segregations, exploitation and humiliation in the million Velivadas across the country, in landlessness, in dispossession, at work, in sewer-deaths, in wage-levels, or even in universities. But the hydra headed beast that Brahmanism is, it attempts to erase, obfuscate or obscure the same in more ways than one, in rhetoric.

The choicest means of course is by positing an other. The Muslims. As Ambedkar said,

“Hindu Society as such does not exist. It is only a collection of castes. Each caste is conscious of its existence… A caste has no feeling that it is affiliated to other castes, except when there is a Hindu-Muslim riot.” 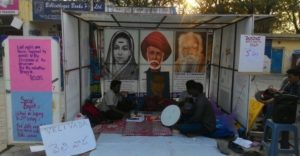 Elucidating the same, Umar Khalid, yet another victim of such binaries told The Wire, “Till before elections, one is treated a Dalit; communal rhetoric, hatred and polarisation is made to kick in at the opportune moment so as to obfuscate the reality and forge a supra identity of Hindu pitted against the Muslims.”

“Another means quite in vogue today is jingoism that runs by the name of nationalism. The other in this instance is the anti-national,” he said.

Anti-nationals go by another name also as we saw in the second half of 2018 – ‘urban Naxal’. We saw this in operation in the aftermath of Bhima Koregaon wherein a Hindutva and Brahmanical attack on Dalit assertion was craftily converted into a fiction of an “anti-national” plot.

But when none of these work, when Dalits consciously see through such machinations and in turn forge alliances with the “other” oppressed – Muslims, workers, farmers – then erasure takes more direct forms.

When a Velivada in the heart of an university continues to challenge communal muscle flexing, when it serves to constantly expose their casteist core with placards and songs; when it claims the legacy of Ambedkar and Savitribai Phule; when it brings together the echoes of Jai Bhim and Lal Salam in campuses across the country and beyond – then it is erased by force.

They demolish the Velivada in the dead of night, they vandalise, they desecrate. This is their most desperate and brazen attempt to obliterate a history of oppression that the Velivada lays bare. But millions of Rohiths will continue to fight – not only remember their history, but also to change it. #KhabarLive