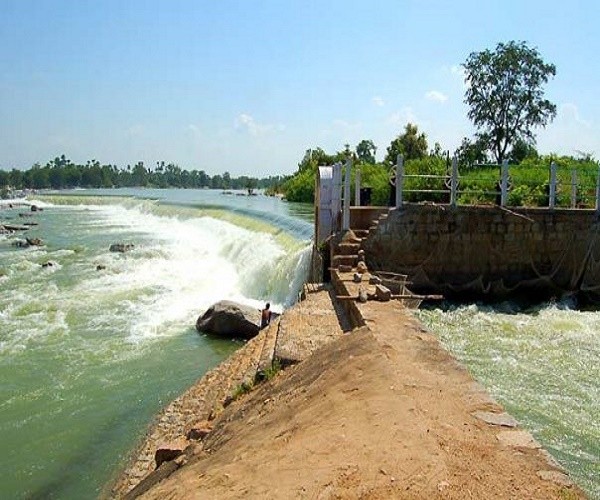 Withstanding the tests of time and tide, Sadarmatt anicut still stands tall opening up opportunities as a tourist spot too. It aged over 100 years and withstood fierce floods in the course of time. It has defeated the test of the time. And it is still able to serve its purpose. It is an epitome of engineering marvels and vision of rulers of the yesteryear. However, the greatness of this iconic facility was not known, nor highlighted until recently.

The International Commission on Irrigation and Drainage (ICID) accorded the status of Heritage Irrigation Structure to a 127-year-old Sadarmatt anicut or low-level barrage, constructed using available technology and material of the olden days across Godavari near Medampalli village in Khanapur of Nirmal district, cheering farmers of this region.

The barrage was erected by then Hyderabad government’s ruler, Nawab Ikbal-ud-Dowla in 1891-92. It was taken up during the regime of the Taluqdar (governor), CE Wilkinson and it was designed by a French engineer JJ Ottley.

The International Executive Council, the apex body of the ICID, gave its nod to include Sadarmatt in its Register of Heritage Irrigation Structures during its 69th session held at Saskatoon in Canada from August 12 to 17. It presented plaques to member secretary of the Indian National Committee on Surface Water (INCSW) at the event. The chairman of committee invited Irrigation and CAD department of Telangana to receive the title in New Dehli, soon.

The oldest anicut of Telangana
Touted to be the oldest barrage of Telangana, the anicut was contemplated by the erstwhile Government of Hyderabad as an integral part of Godavari valley scheme for irrigating lands on the north flank of Godavari. It was built across Godavari on the outskirts of Medampalli, a hamlet under Surjapur village, and 42 kilometres below the present Sri Ram Sagar project of Nizamabad.

Engineering marvel of yesteryear
Regarded as an engineering marvel, the historical structure was built using stones, lime and simple irrigation equipment in two arms separated by a high mound in between and consists of a masonry structure 2m high and pointed on the face and plastered on top surface with a length of the anicut 437.4 metres on the left flank and 23.8 metres on the right flank. The estimated cost of this structure was said to be barely Rs 1 lakh.

The anicut was envisaged to irrigate 13,100 acres of paddy fields in 26 villages of both Khanapur and Kadem mandals, with a storage capacity of 4.129 TMC. It was designed to discharge 7.76 lakh cusecs of flood water. The robust structure could withstand massive floods registered in the last 100 years. The catchment area of the structure is about 40,000 sq miles spreading in Nirmal and neighboring Jagital and Nizamabad districts.

Vital role in agriculture growth
The anicut has been a major source of irrigation for Khanapur and Kadem mandals since its inception. In particular, Khanapur used to be considered as one rice bowl of northern Telangana a century ago because of the structure. Still left canal of the barrage is able to irrigate 2,000 acres of fields, while the right canal used to provide water to 15,000 acres.

Farmers upbeat
The farmers expressed happiness over the recognition. They stated that the structure finally managed to secure the status, though delayed. They informed that the much-awaited dream was fulfilled following the formation of Telangana State. They thanked both Union and State governments on getting the tag to the ancient barrage.

“Sadarmatt anicut is a marvellous structure built without spending much funds. It was constructed by the then Nizam rulers for ensuring irrigation facility to paddy fields of this region. It has been over a century since the erection of the barrage. Still, the structure is playing a vital role in the growth of the agriculture sector of Khanapur Assembly constituency,” Chinni Rajeshwar Reddy, Khanapur village development committee chairman, said.

ALSO READ:  'e-Aushadhi' To Keep Tab On Distribution Of Medicines From Govt Hospitals In Telangana

TRS govt grants Rs 16 cr for strengthening canals
Despite the glorious history, the anicut failed to draw attention of successive governments. However, Telangana government released Rs 16 crore for renovating canals of the barrage. It is constructing a new barrage across Godavari, seven kilometres above the Sadarmatt, at Ponkal village in Mamada mandal, costing Rs 520 crore. The works are being progressed at a remarkable speed.

Picnic spot
Sadarmat is one of the picnic spots in Nirmal district. It is visited by picnickers from not only this district, but also neighboring Jagtial and Nizamabad on weekends and festivals. Fishermen indulge in fishing during monsoon. It can be converted into a tourist spot as it has the potential to attract visitors across the State if basic amenities developed. #KhabarLive