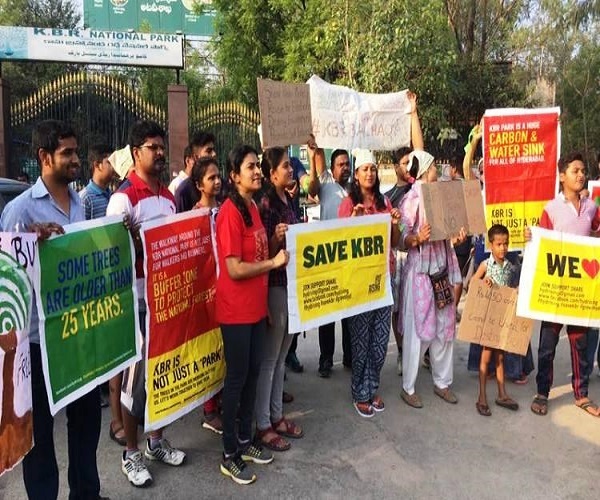 Citizens in Hyderabad may soon not be able to take a stroll along the walkway of the Kasu Brahmananda Reddy (KBR) National Park as the state government is seeking to go ahead with its Strategic Road Development Plan (SRDP) to construct multi-layer flyovers around the city’s largest lung space.

The bone of contention between activists and the government is over the proposed ‘shrinking’ of the walkway, which is part of the Eco Sensitive Zone (ESZ) of the national park in the heart of the city. The state government had earlier taken up the issue with the Centre and sought permission to cut trees and reduce the width of the walkway, in order to facilitate the construction of the flyovers. Following this, activists in Hyderabad have started an online petition to ‘Save KBR Park’ as the 60-day period to raise objections with the Ministry of Environment and Forests (MoEF) is set to end soon.

In 2016, scores of residents took to the streets holding placards and raising slogans. They also moved the Hyderabad High Court and the National Green Tribunal (NGT). However, the project was not stalled and has been going ahead. As part of the SRDP, six junctions were to be developed at various locations, including KBR Park entrance, Jubilee Hills checkpost, Film Nagar junction, Jubilee Hills Road No. 45, Maharaja Agrasen junction (Banjara Hills Road No. 12) and Cancer Hospital junction (Banjara Hills Road No. 10).

“This proposal for a drastic reduction, of already shrunk ESZ, is a step that completely negates the objectives and principles of the ESZ. This revised proposal of a zone ranging from 3 metres to 29.8 metres does not reflect the actual condition and status of KBR Park. This revised proposal is primarily to help in allowing construction of multi-level flyovers, which would destroy the very existence of the Park.

ALSO READ:  Your Favourite 'Drink' May Be A 'Fake'

It appears that the government in general, and Forest Department in particular, is treating this as a land bank to release periodically for commercial exploitation, not as a land of ecological and environmental importance,” the petition on Change.org reads.

“The draft notification seems insensitive to the current extent of open area around KBR National Park, which is just 25 to 35 meters; 0.3% of the recommended ESZ of 10 km. It is appalling that the draft notification, instead of attempting to extend this boundary by placing restrictions on human activity is recommending reducing it to near zero,” the petition adds.

“The Centre could have rejected the proposal but they have also accepted the state government’s plan and published the draft notification,” says Kaajal Maheshwari from citizen initiative ‘Citizens for Hyderabad’, which has been raising a stink over the issue for the past three years.

“Such notifications are not issued during elections, but the draft was published on October 30, when all of us least expected it. We only realised it a few days ago, and we have been trying to garner support,” she adds. Activists have also started a website for the same purpose and also plan to hold a rally on the morning of December 23 at the main gate of KBR park.

Stating that KBR Park should have an ESZ of at least 1 km, the petition also insists that the “state government should explore real and sustainable alternatives to overcome traffic problems in the city, such as improving transit facilities, promoting bicycling and walking, and restrict vehicular movement – all of which do not need encroaching upon the already very limited open space that exists around the KBR National Park.” #KhabarLive

Locals Fear Unsafe On ‘Rape Killings’ in Shamshabad Area Within A...