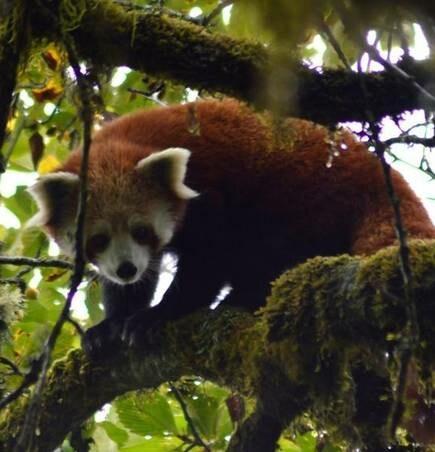 Hyderabad based genetic researchers from Centre for Cellular and Molecular Biology (CCMB) have successfully completed the genetic diversity assessment of Red Panda (Ailurus fulgens), the elusive mammal of the Himalayan region, which is classified as endangered in the IUCN (International Union for Conservation of Nature) Red List.

Also known as a cat bear or a fire fox, these creatures are on the endangered list. They live in the north eastern part of the country. They weigh around four kilos and are reddish brown in colour.

The wild population of Red Panda is estimated at fewer than 10,000 mature individuals and their numbers in the wild continue to decline due to large scale hunting, trapping, fragmentation, habitat destruction and inbreeding depression. Conservation of Red Panda is also important because this is only surviving member species in the family Ailuridae.

Red Pandas are known as ‘cat bear’ or even fire fox (now you know who that browser and bike is named after). He is just a little bigger than your neighbourhood kitty weighing around four kilos and is reddish brown in colour. He has soft thick fur and a thick, bushy tail, which he wraps around himself like a blanket .That sure keeps him warm as a toast in the cold climes he lives in. His tail has a ringed pattern of brown and red and he also uses it to balance himself on the tree branches he hangs out in.

Red Pandas are found in Sikkim, Meghalaya, Arunachal Pradesh and Assam besides Nepal, Bhutan, Myanmar and China. Since they live in the higher mountain areas, and spend all their time up the trees — in dense forests and bamboo thickets, you hardly get to see them. In any case, they are painfully shy creatures and like to lead solitary lives. As told you earlier, they love their bamboo but unlike the giant pandas, they are not averse to exploring other summer options like fruits, roots, leaves, mushrooms and an occasional bird’s egg or two. But this excessive bamboo diet does not have any nutritional value as it’s low on energy content. This makes our friend very lazy and lethargic.

The CCMB researchers have worked closely with conservation specialists of Padmaja Naidu Himalayan Zoological Park in Darjeeling and Himalayan Zoological Park, Gangtok, to assess the genetic diversity of captive bred Red Panda. The genetic specialists from Hyderabad are part of the Red Panda Conservation Breeding Project at Darjeeling Zoological Park, which is widely regarded as the one of the most successful and only breeding programme of Red Pandas in their natural distribution zone.

In a paper on ‘Genetic Diversity Assessment of Captive Red Panda Population in India’, which was recently presented in an international conference on wildlife conservation, the researchers said that the ultimate goal of ex-situ conservation (which means protective breeding of endangered species outside it’s natural habitat i.e. in a zoo) is re-introduction of Red Panda into their wild habitat, much like the Mouse Deer conservation initiative in Nehru Zoological Park in Hyderabad.

Genome DNA was isolated from blood and faecal samples of these captive animals. The resultant data was analysed for genetic diversity of the population, heterozygosity levels in individual animals, identification of mother-offspring and sibling pairs and for population viability analysis based on genetic diversity, CCMB researchers said.

Such studies play important role in assessing genetic fitness of the captive populations, their fitness for release into the wild and perhaps also to track their contribution to the wild populations in the future. The Red Panda genetic study was conducted by Ayu Singh, Arun Kumar, Nisha Nandhini and P Anuradha Reddy from CCMB. #KhabarLive

Valuation Of Integrating Forests With Agriculture