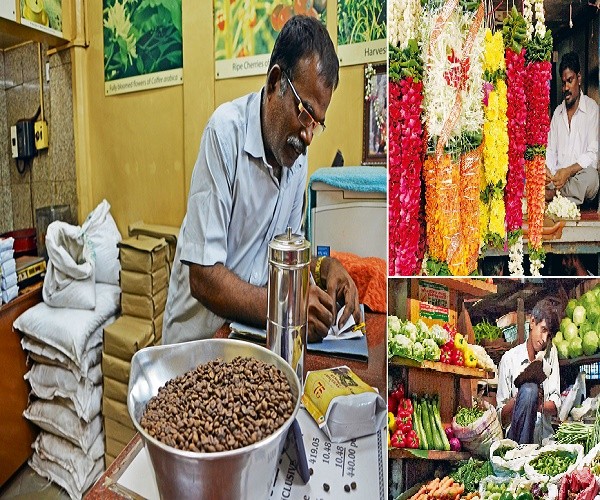 A food-oriented walk in a storied neighbourhood gets you up-close with soulful South Indian and Telangana meals, corner stores brimming with snacks, and a colourful vegetable market.

Clutching a silver medallion token, I wait my turn in the payasam-scented passageway of Matunga’s 76-year-old Udipi Shri Krishna Boarding and Vasant kumar’s Telangana Flavours. Having missed a meal on a guided walk earlier, I’ve come again to have a taste. From the Nilkamal chair I’m seated in, a softboard catches my eye. Pinned on it are yellowing newspaper cuttings; advisories enlisting such familiar gems like ‘Don’t loosen your belt after a meal,’ and a handwritten letter by Mohit and Gargi (presumably a couple and regulars) stating how much they’ll miss the establishment once they move to Goa.

Twenty minutes before lunchtime ends, I’m finally guided to a table under a whirring fan. It’s a modest diner, so hygienic that even “The Owner of this Restaurant Eats Here,” a placard inside tells me. The frenzy is hard to miss. A battery of servers are frenetically dispensing thalis, balancing them on their muscular forearms like circus jugglers.

“Vaazhai ilai” one white-aproned waiter mutters and Santosh swiftly spreads a banana leaf. I ignore the sambar for the nut-brown, runny rasam. Seasoned with chilli, pepper, and cumin, its pungency instantly unlocks my palate. But it’s the seasonal maanga kozhambu (raw mango curry) I devour, scooping out the mustard seed-speckled, sweetish tangy orange gravy cradling between the leaf’s green veins. Santosh’s smiling refills help. For Rs200, the thali is unlimited but the dessert isn’t. So I opt for a bowl of gooey paruppu payasam. Cooked and cooked in coconut milk, with jaggery, ghee, and chana dal, it’s star-dusted with cardamom and irresistibly aromatic when arrives. It tastes better than it smells. Within seconds I scrape the tiny steel bowl Vim-bar-commercial-level sparkling clean. The payasam serves as a perfect closure to a soulful Udipi meal in a place that has fed state governors.

For an unpretentious South Indian meal, Shri Krishna is where Deepa Krishnan ends her food tours in Matunga. The neighbourhood came to be settled by mainly South Indians and Gujaratis in the aftermath of the plague that hit Bombay in 1896, forcing many to either move northwards or flee.

The communities gel well, Deepa, an affable Palakkad Iyer, offers, as we amble past the last remaining art deco buildings in the locality she was raised in and is a resident of. “Because they’re vegetarians?” I prod. “Oh, they won’t even look at eggs!” she affirms, laughing. “Good luck buying them here. But cross the circle and every living thing is edible.” (Dadar Parsi Colony is a stone’s throw away). “That café there was a no man’s land,” Deepa says, pointing to Koolar Café. The 90-year-old eatery, which found footage in the Irrfan Khan starrer Lunchbox, is amongst the few to take the cudgel of preserving Bombay’s Irani café culture, doling out piping hot brun maska, fluffy minced chicken omelettes and a rainbow of saccharine-rich pastries. Back in the day, she says in jest, Koolar is where the “bad boys of Tamil folks went to break food taboos.”

The two-hour tour, designed by Mumbai Magic, a walk-focused tour company Deepa founded in 2007, extends beyond food sampling though. For Rs1,000, participants are brought up to speed with nuggets on the area’s gentrification, temple tales, and corner stores overflowing with snacks you find yourself rummaging for in your South Indian friend’s kitchen.

Your olfactory receptors unfalteringly guide you to Mysore Concerns, a coffee shop where residents from distant suburbs flock on weekends. “This is the umbilical cord that draws many from as far as Thane and Goregaon to Matunga,” Deepa fills me in, waving out to a burly, moustachioed man behind the counter we’re now approaching.

He keeps a steel filter and some coffee beans ready for Deepa to break into a dry demo of how filter coffee, “the secret of every self-respecting Tamil household,” is concocted. Once she’s through, I inch closer to the table where the action is: Three workers are busy loading the beans in a giant red grinder, emptying the powder into thigh-high steel barrels, and then filling the freshly crushed—still blissfully warm—mix into packets of quarter kilo (Rs110) and half kilo (Rs220). Of the 300 kilos ground daily, more than 50 per cent is sold the same day.

After fielding requests from staff for photos my colleague has just clicked, we walk out. I smell like Coffee Bite, or that kid who’s just finished frolicking in a roastery.

It’s at the popular Café Madras, five minutes down the kerb, that we squeeze in at a community table for filter coffee. The server meets my expectation, delivering the café’s star performer theatrically. Stretching both his arms to the maximum, he pours the liquid from one steel cup to another, fully aware that he is being watched. After five months of no caffeine, I savour the dense, bitter-sweet brew like a shot of comforting Bailey’s.

Inching closer to the railway station, past gypsies peddling walnuts and jamuns in frankincense-fumed baskets, we make multiple pit stops. Of them, Annapurneshwari is noteworthy. It’s from where Deepa stocks Palakkad-manufactured tapioca poppadum and other snacks. I pick up a tapioca pack (Rs70) to try later, and parade through the goodies on the bulb-lit counter. There is murukku (deep-fried savoury snack made with rice), sharkara upperi (fried raw plantain dipped in a jaggery solution and dusted with dried ginger) and neiappam (ghee-fried golden nuggets made with rice, jaggery, banana, and cardamom). Murukku is something I had tried a little while ago from another store, Mahalaxmi. The size of my palm, the snack’s tight swirls were crisp and yet soft enough to bite into.

By the time we hit the main bazaar, it’s cacophonous with calls of hawkers, including mogra-wearing Tamil ladies, selling coconuts, cannonball-sized white and yellow pumpkins, and bananas in at least 20 shades of green. Piles of moringa leaves, or the “new kale” as Deepa says, are another mainstay here. “Moringa has become a superfood now but we’ve been cooking it for generations,” considers Deepa as we walk towards the covered area of the market. On our way in, she shares her pati’s (grandmother’s) recipe of murungai-elai-adai, a dosa-like snack made from a batter of rice powder, water, salt, and flavoured with fresh moringa leaves.

Inside, many wholesale banana shops have been replaced with those selling hosiery and hair pins. “It’s transitioning into a Ladies Market,” Deepa smiles, guiding us to a shop chock-full of chips. I pick banana and jackfruit. The crispy goodies are polished off by colleagues over two days. Sogginess? Zero!

Two nights later, I fry the tapioca poppadum at home. The chequered papad goes gorgeously well with a Kerala-style fish curry just as it did with Shri Krishna’s maanga kozhambu. #KhabarLive 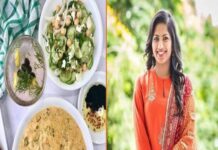 Why BJP Repeatedly Say ‘Beti Bachao’ And Then Do ‘Balatkari Bachao’...

King Of Fruits – ‘Mangoes: The Fruit That Holds My Fragile...