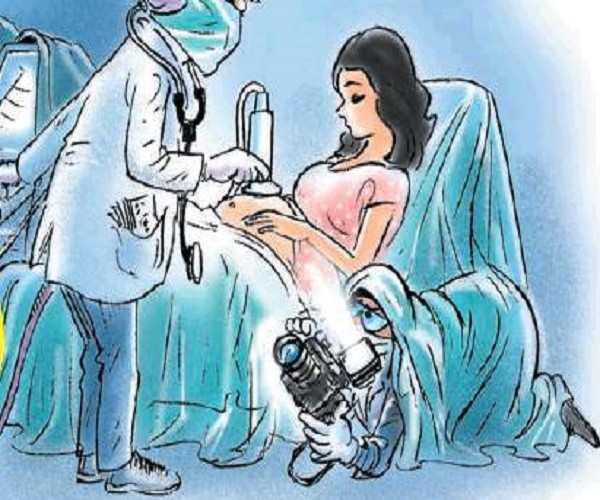 A pregnant woman, who was part of a decoy operation, went to Jyothi Reproductive Health Care Centre, Ameerpet, and discreetly enquired whether she could know the sex of her unborn child. She was willing to pay any price. The hospital assigned two ‘aayahs’ (workers) to take care of her.

The duo summoned an auto to take her to a scanning centre at Yousufguda, tucked away in a residential apartment three to four kilometres away. Incidentally, they changed multiple autos en route to Sujatha Scanning Centre, Krishnanagar at Yousufguda.

After the scan, the doctor at the centre openly announced the sex of the foetus. The two agents even offered ‘servicing’— abortion of the female foetus to the pregnant lady. The entire operation was videographed by a team, comprising police and health officials, and they caught the aayahs and the doctor red-handed while accepting money.

“The two women workers also offered ‘servicing’ — a term used for facilitating abortion of a female foetus — at the hospital for ₹28,000 (₹13,500 for the helpers, ₹800 for the doctor for the test, ₹1,500 for a middleman for ‘referring’ her to the centre and the rest for the abortion (MTP),” revealed Dr IA Sarala Kumar, in-charge district medical health officer (DMHO).

ALSO READ:  Why Telangana 'State Cabinet' Is Not Formed Even After 40 Days Of Elections?

From travelling 7-15 kilometres to a quiet residential area with a pregnant woman in tow to changing multiple vehicles en route, agents facilitating ‘illegal sex-determination’ go the extra mile to carry out the process in a secretive manner. Sometimes, the ‘service’ offer is made at one location, test at another and sex of the foetus revealed at another location.

The decoy operation exposed the dark underbelly and clandestine operations of agents, hospitals and scanning centres, most of them operating from one-room tenements in residential areas.

Dr Gandhi, who owns Sujatha Scanning Centre at Krishnanagar in Yousufguda, was booked under the Pre-Conception and Pre-Natal Diagnostic Techniques (PCPNDT) Act for revealing the sex of the foetus. The doctor apparently had no qualms in accepting that he conducted tests and revealed the sex . He didn’t see anything wrong in doing so, sources said.

Dr Gandhi charged only a nominal fee compared to others. The scanning centre had a valid licence, Jyothi Reproductive Health Care Centre, Ameerpet, which offered medical termination of pregnancy, also had licence. Under PCPNDT Act, revealing the sex and aborting a female foetus were both crimes.

The Hyderabad district administration and health authorities are sitting on at least 40 applications for issue or renewal of licences to hospitals and nursing homes to use ultrasound machines.

As per the Pre-Conception and Pre-Natal Diagnostic Techniques (PCPNDT) Act, no hospital or nursing home can carry out sex determination test. The Parliament had in 1994 passed the law, which banned female foeticide.

According to sources, the 40 applications have not been processed as appropriate authority was yet to give clearances.

Some hospitals and nursing homes, which applied in 2017, were still awaiting permission and sending patients to scanning centres outside, causing inconvenience. The problem is persisting only in Hyderabad district.

A source told #KhabarLive, “Patients are being sent out for ultrasound scans. In cases of emergency and patients in ICU, they are sent to diagnostic centres, which could be dangerous and lead to complications.”

Telangana Hospitals and Nursing Homes Association president Dr CRK Prasad told #KhabarLive: “Earlier, hospitals could directly purchase ultrasound machines, but now, they have to be purchased either by a radiologist or a gynaecologist. Companies won’t deliver it unless we produce a licence.”

When contacted, Hyderabad district medical and health officer (DMHO) Dr K Padmaja said: “As per recent information, 40 applications are pending. The multi-member appropriate authority’s meeting is not happening due to various reasons. Earlier, an advisory committee used to grant licences. Now, after the revised guidelines, an inspection has to be carried out by the officials after which the advisory committee has to scrutinize it.