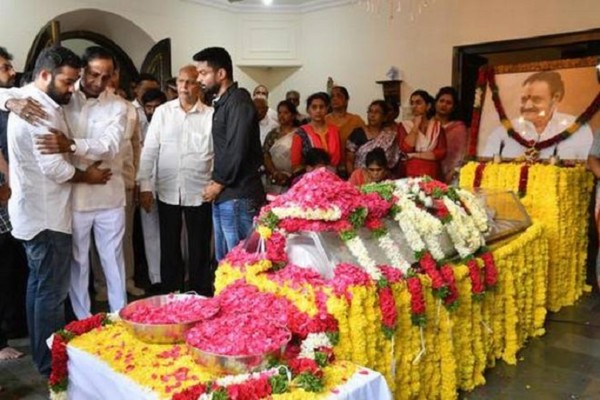 It’s uncanny and sounds eerie. After completing his campaign for the Telugu Desam Party (TDP) in Khammam during the 2009 elections, returning to Hyderabad N.T. Rama Rao Jr. had a near-fatal accident. Though out with multiple injuries, including that of the shoulder, the young actor recovered soon and went on to perform his “easy but difficult” dance moves.

It was in 2004, another election year, in December, when the Nandamuri family lost their son Janaki Ram in a highway accident, that sent a strong message on road safety. His bereaved siblings made sure that their movies opened and audio functions contained the message: “Observe road safety. We hope the tragedy that hit our family is not experienced by any other family.”

Incidentally, the accidents to the Nandamuri family have a few things – albeit uncannily – in common. All the three accidents occurred in the contiguous Nalgonda district – Mothe in Suryapet, Akupamula in Munagala and Anneparthy in Nalgonda. And none of them wore seat belts.

Wednesday’s accident, the police say, was a “miraculous escape” for his friends who also didn’t wear seat belts. After crashing the road divider, the SUV at 160 kmph should have gone at least 15 feet high toppling multiple times, the police re-imagined. And by then Harikrishna was thrown out.

According to Harikrishna’s friends, Venkat Rao and Shivaji, who were travelling with him on Wednesday, “he slowed down a lot after Janaki Ram’s incident in 2004, and he did not exceed 120 kmph now. Till today, not one car he owns has a scratch,” they say.

Not the speed, but Harikrishna, in an attempt to avoid a stone steered to the right, “And that one moment, everything happened,” they rue.

The stone he avoided was a marker on the extreme left of the highway. And, it was uncannily numbered ‘2’.

Harikrishna was privy to several developments relating to the newly founded party along with his father NTR ever since he took the steering of the Chaitanya Ratham, the iconic vehicle in which NTR conducted a whirlwind tour of the erstwhile united Andhra Pradesh in nine months and stormed to power in January next year. However, his entry into active politics came almost a dozen years later.

His chequered political career started after his being nominated as the TDP’s candidate for the by-election to Hindupur Assembly constituency in 1996. The seat fell vacant after the death of NTR on January 20, 1996 after a series of political developments which saw shift of power centre in the State. NTR’s son-in-law and Andhra Pradesh Chief Minister N. Chandrababu Naidu took over the reins of the party as well as the government from NTR in the developments often referred to as ‘August crisis’ by the party insiders.

Harikrishna, who was on Mr. Naidu’s side during the party’s internal crisis, was fielded in place of NTR and he won with a landslide of 62,000 votes. He was immediately inducted into the State Cabinet as Transport Minister, but did not continue in the post for full term as his relation with Mr. Naidu soured . Harikrishna came out of the TDP to launch his own party Anna Telugu Desam in 1998. The new party, however, faced a debacle in the 1999 elections with 188 out the 191 candidates it fielded from different constituencies forfeiting deposits. Harikrishna himself managed to secure little over 11,000 votes from the Gudivada constituency where his native Nimmakuru is located.

After keeping himself away from active politics for a few years, Harikrishna made re-entry into the political scene on being nominated to Rajya Sabha by the TDP. As the pitch for separate Statehood grew louder in the subsequent years, Harikrishna was among the few politicians who openly opposed bifurcation of the Telugu State. In the process, he submitted his resignation to the then Rajya Sabha chairman Hamid Ansari in August which was promptly accepted by the Chair.

Since his resignation from the Upper House, Harikrishna stayed away from active public life and made himself busy in the film field, co-starring in a few movies with top heroes of Telugu films and also playing lead in a few others.

Driving almost non-stop except for pit stops and stump speeches were Harikrishna, then 26, and his aide Krishna Prasad Reddy.

“He taught me everything about driving. He told me ‘Your judgement of road should be correct and nothing will happen to you. You don’t have to fear anything.’ I used that as a lesson,” says Mr. Reddy, unable to hold back tears while trying to catch a last glimpse of Harikrishna.

For eight months during which NTR was on the road before 1983 elections, the vehicle reportedly logged 75,000 km. It was either Harikrishna or Reddy who drove the vehicle. “I could sense his tiredness and would tell him to change seats. Then I would drive for some distance before he again took charge,” recalls Mr. Reddy.

“Very few had access to the vehicle. It was small and could not accommodate many people,” says Prakash Reddy of TDP about the modified green Cheverolet van with ABR 7776 registration number. But the vehicle changed the political landscape of Andhra Pradesh and spawned countless copies. Political observers said the idea about using a modified vehicle to travel around the State was given to N.T. Rama Rao by his erstwhile cinematic colleague M.G. Ramachandran. MGR successfully stormed to power in Tamil Nadu in 1977 using a similar vehicle.

Harikrishna steered the vehicle for N. Chandrababu Naidu between Tirupati and Srikalahasti. When he joined the ministry of N. Chandrababu Naidu in 1996, after winning the Hindupur Assembly seat, he took charge of Transport Ministry. An epochal move he made was to open the doors for women in the State Road Transport Corporation. Hundreds of women were hired as bus conductors.

A man who loved wheels and driving he had a soft spot for the number 2323. Most of the vehicles he owned or registered for him had the same number. Ironically, his elder son Janaki Ram died driving a vehicle AP29BD2323 in 2014, while Harikrishna died driving AP28BW2323. #KhabarLive