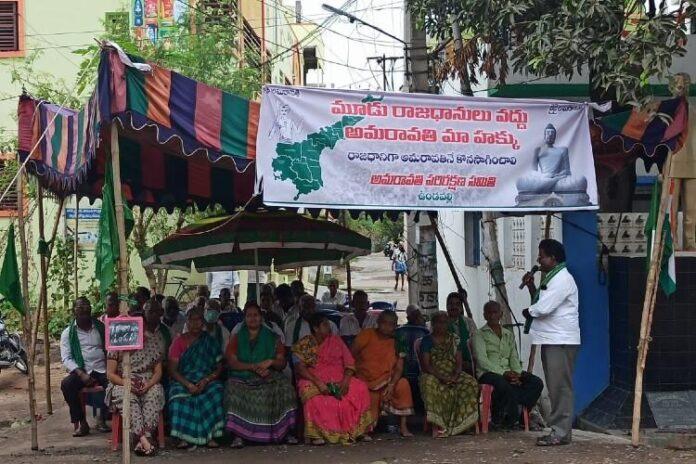 The roads leading towards the Andhra Pradesh Secretariat and High Court continue to be dotted with multiple protest sites in Amaravati villages like Undavalli, Penumaka, Yerrabalem, Krishnayapalem, Mandadam, Velagapudi and Thullur. These protests, backed by the opposition parties, have been ongoing for more than 80 days, since people from the 29 villages of Amaravati took to the streets to protest against the YSRCP government’s decision to decentralise the capital of Andhra Pradesh.

The government’s proposal to establish three capitals in Kurnool, Vizag and Amaravati meant that the primary capital functions would be shifted away from Amaravati to Vizag, diluting the status of Amaravati, which has been proposed as the legislative capital. The protests began in mid-December, right after Chief Minister Jagan announced the three-capital proposal in the Assembly.

For many days, the protests saw huge turnouts, as many people who had contributed their land for the capital in exchange for developed plots in the capital city were majorly upset with the announcement. The villages of Mandadam, Velagapudi, and Thullur, which are closest to the Secretariat and the High Court, and had also given major chunks of their villages to the capital, saw some of the largest protest gatherings. At Mandadam, the road to the secretariat was even occasionally blocked for a few days.

ALSO READ:  The 'Makeover' Of Domestic Cricket 'Ranji Trophy' Tournaments Are Cause Of Concern

The protests continued with relay hunger strikes, various Hindu rituals and other activities. As the agitation entered its 20th day, a call for a 10 km march from Thullur to Mandadam saw massive participation, with nearly 10,000 people reported to have turned up. Soon after this, the police began to completely thwart any attempts to organise any rallies or marches.

While orders under Section 144 Cr PC (banning assembly of more than four people) and Section 30 of Indian Police Act had already been in place in the area for a while, with police force heavily deployed in the region, these orders were now enforced more strictly. A foot march to the Kanaka Durga temple by a group of women protesters in Thullur was foiled, along with a call for villagers to gather at the protest site in Mandadam. Police detained many protesters, and the people involved alleged that the police had manhandled women protesters.

A few days later, a ‘chalo Assembly’ rally called by the TDP to register protest against the passing of two bills making way for decentralising the capital was also foiled by the police. Once the two bills (Andhra Pradesh Decentralisation and Inclusive Development of All Regions Bill, 2020, and the Andhra Pradesh Capital Region Development Authority (CRDA) Act (Repeal) Bill) were passed in the Assembly, the conflict moved to the High Court.

More than 80 days on, the protests have continued in small pockets in multiple Amaravati villages. While the number of participants may seem to have thinned a little, organisers are trying to keep the protests going through different measures. Recently, to mark the completion of 75 days, protesters staged a ‘jala deeksha’ by standing and swimming in the Krishna river.

At Penumaka, three men from the village who had pooled their land for Amaravati sat on an 80-hour hunger strike to mark the 80th day of protests, while a group of women conducted poojas. “The protests will continue until the CM declares that the sole capital will remain in Amaravati,” an elderly man from the village said.

In Mandadam, the protest gathering has been moved across multiple venues over the past 80 days. “Cases have been slapped against many people, that is why the crowd is a bit smaller,” says Yugandhar, a resident of Mandadam. People across protest venues insist that they will keep increasing the day-counter displayed in front of every protest site, until the YSRCP government revokes its decision. “They are now giving away Amaravati land to people from other districts under their housing scheme. This is not what the people had given their land for,” Yugandhar said. #KhabarLive