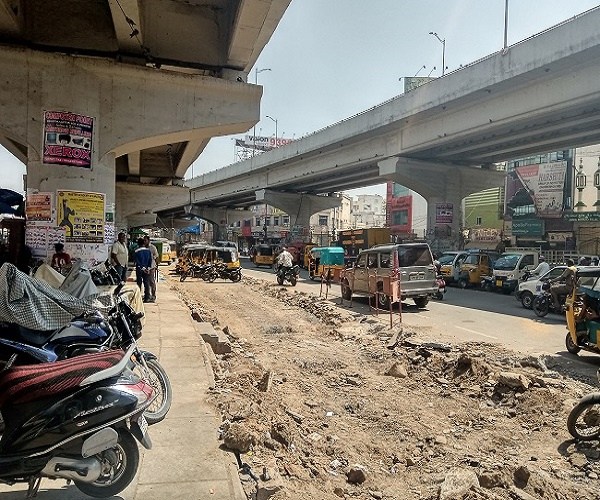 It’s been four years since the 650-metres-long Tolichowki flyover opened to ease traffic going from Mehdipatnam towards Gachibowli and Hitech City. One of the few six-lane flyovers in the city, it splits in the middle in order to accommodate a temple and a dargah that lie at the centre of the Tolichowki junction in Hyderabad.

But the area below the flyover in Tolichowki has been neglected. A part of the road adjoining the piers is dug up, and there are tempos, trucks and auto-rickshaws parked in other places. At the junction, chaos ensues as vehicles enter from different directions in an unorganised manner.

Even before its opening was delayed due to land acquisition hurdles, the flyover — officially called the Salar-E-Millat Sultan Salahuddin Owaisi flyover — had caused widespread criticism. For one, it drew flak because of the religious structures that the bridge was potentially going to rise over and later, due to road widening that resulted in a reduction in the sizes of shops. The end result was a six-lane flyover with two parallel disjoint bridges. 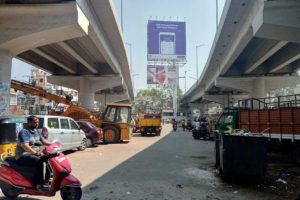 Syed Imran, the owner of a medical and general store in the area and a longtime resident of Tolichowki, says that the problem with the flyover is that there are two bridges instead of one as is usual. “When the flyover was coming up, a certain religious sect protested because they did not want it to go above their place of worship,” Imran says referring to the Hanuman temple in the middle of the Tolichowki junction. But his problem doesn’t lie with protesters, but rather with authorities who have ignored the area after the flyover’s construction.

“After building the flyover, the authorities have neglected the main Tolichowki junction. There are no signals anywhere. Unauthorised vendors have blocked the streets. Vehicles coming in from the connecting roads have little moving space and when one is turning there’s one vehicle waiting after the other because turning is so inconvenient,” he explains.

Imran says that the flyover, a big infrastructure investment, offers no benefit to the residents of the area. “They don’t care about the poor. The road bypasses the area entirely but poses no benefits to the residents,” he contends.

The flyover takes up most of the road space of the Old Mumbai Highway, leaving a lane each on either end that lead towards the Tolichowki Cross Road junction.

The adjoining approach roads leading to the junction are so narrow that buses from the Gachibowli and Hitech City direction take the flyover towards Mehdipatnam, skipping the main Tolichowki hub altogether. In order to accommodate passengers, however, these buses make an unscheduled stop at the foot of the flyover before going up the bridge. Passengers waiting to get on are forced to wait unsheltered in the sun before hurriedly boarding the bus. But some buses go from below the bridge towards Gachibowli from Mehdipatnam to avoid a similar ordeal on the other side.

But despite Imran’s complaints, some say the flyover has its merits. Omar, who runs and makeshift dosa joint near the Tolichowki X roads junction, says, “The road here used to be entirely jammed earlier with traffic coming in from all sides. Now that the flyover is here, the traffic is less and that is why I can have my dosa stall here.” He has been in the area for more than 13 years, but it is only after the flyover was built that he could move to the main road. “The road is wider now too,” he says pointing at a restaurant next to his stall whose entrance he claims was pushed inside to compensate for the road occupied by the flyover. “Earlier, they would have evicted me if I had set up stall here, but now they don’t because the road is wide enough.”

ALSO READ:  Dumping Banned On ‘No Compromise’ Roads In Hyderabad 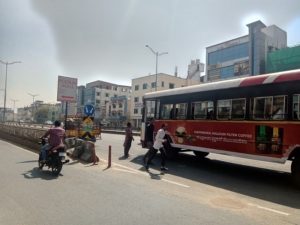 Flyovers that pass through crowded neighbourhoods such as Tolichowki can disrupt the flow of the life for residents. Moreover, the large amount of space created below the flyover often falls into disuse and stagnation. In Mumbai, the state government is beautifying such spaces by making gardens with seating and jogging tracks.

“Flyovers dissect neighbourhoods, they make access difficult and they do not solve actual transportation problems,” says Ananth Maringanti, director of Hyderabad Urban Lab, a non-profit aiming to find solutions to the challenges of contemporary urbanisation. Maringanti says that the effects are visible in little everyday things, something as simple as older people being unable to easily cross to other side.

And since theur limited scope for commercial success in the areas below flyovers, few are willing to take responsibility for it, he added. “Which government has the money to do something about space that is not giving revenue?” he says. “Flyovers are infrastructures that create legacies and become long-term liabilities—you can’t change anything around them. So worldover, the response has been to not do flyovers anymore.” #KhabarLive