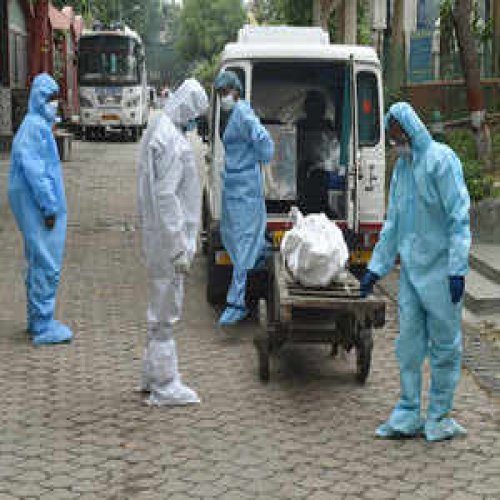 In a major goof-up and sheer negligence, authorities at state-run Gandhi Hospital in Hyderabad handed over the body of a man who died of Covid-19 to another family which performed the last rites.

The incident came to light lately a day after relatives of a 37-year-old man, who had succumbed at the hospital, found that his body was missing.

The frantic search involving police led to shocking revelation that his body was handed over to the family of another man, who too had died of Covid-19. The burial took place at Pahadi Shareef on the outskirts of Hyderabad.

The 37-year-old died in the early hours. “The hospital staff called us to identify the body but it was not there. We kept searching all over the hospital with the help of police and today, we came to know that the body was handed over to another family and they performed the last rites,” a relative of the deceased told #KhabarLive.

The family of the other deceased was called back to the hospital and it was found that the body of their relative was still lying in the mortuary. After taking the consent of the relatives of the 37-year-old man, the body was handed over to them.

“My uncle was 37 while the other man who had passed away was 40. Since they were almost of the same age and built, the other family probably mistook it for the body of their relative,” he said.

“The entire incident is very shocking for us. We are planning to lodge a complaint against the hospital administration,” he said.

This is the latest in a series of controversies to hit Gandhi Hospital, the state nodal centre for treatment of Covid-19 patients.

Two days ago, hospital authorities had handed over somebody else’s body to a family who had lost their relative to Covid-19.

The incident had come to light when the body of the 48-year-old was brought to a graveyard in Begumpet area and his wife who was called to have a last look at the body realized that it was someone else. It led to a heated argument between the family and the police and officials of Greater Hyderabad Municipal Corporation (GHMC).

The body was then shifted back to Gandhi Hospital and after a search, the family found the body of their relative.

Earlier, a woman claimed that her husband went missing from Gandhi Hospital where he was admitted for treatment of Covid-19. The hospital authorities, however, said he had died while undergoing treatment and he was cremated by the GHMC as no one from the family came forward to receive the body.

The woman and her two daughters, who were also under treatment at the same hospital, claimed after their discharge that no one from the family was informed about his death. The woman last week approached the Telangana High Court seeking a probe.

Last month, authorities at a government hospital in Kurnool town of Andhra Pradesh had swapped the body of a Covid patient with a non-Covid patient.

The issue came to light when relatives of a 66-year-old man found that the body of someone else was handed over to them. The investigation revealed that they were given the mortal remains of another man who had died of Covid-19 at the same hospital. The 66-year-old was cremated as per the protocol meant for the last rites of those succumbing to Covid-19. #KhabarLive #hydnews