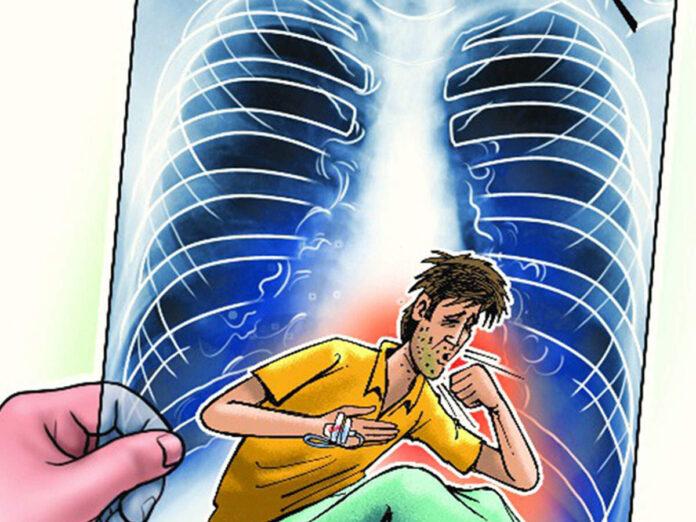 The communicable disease Tuberculosis is spreading silently its tentacles across Hyderabad slum areas with increasing rise of serious cases marking the concern over severe health crisis.

Recently, Shaheen Begum, who is just 32 year old, lost her husband to tuberculosis. He was the family’s sole bread-earner. He was undergoing treatment for relapse of tuberculosis for the third time in a matter of two years at the community health centre (CHC) in Barkas.

After he passed away, their 7-year-old daughter was diagnosed with tuberculosis (contact tracing was done by CHC) and is undergoing treatment.

The dread of the disease has caught on her extended family as well and they remain out of touch now.

“My relatives are even hesitant to meet us. They don’t invite us to any function and we stay away too. Now I fear for my daughter’s life,” said the distraught mother.

Several families living in slums in the city are facing the same problem, with more than one family member being diagnosed with the disease. They also complained that government help (Rs 500 per month and free medicines) is not sufficient.

In three slum areas that #KhabarLive visited, a few bylanes had 3-7 houses with a cluster of tuberculosis patients. The spread has been rapid despite many of these patients being under treatment.

Another family in Bandlaguda slum area has a second member battling the disease. “Our elderly neighbour passed away because of tuberculosis. Later, I was diagnosed with tuberculosis and now my 4-year-old child has also contracted the disease,” said a 34-year-old woman, who is now on daily dosage of injections and pills to cure the multi-drug resistant tuberculosis (an aggressive form of tuberculosis).

Though the government provides Rs 500 a month and free medicines to patients, the cases of patients discontinuing the treatment are hardly being followed up.

“The government health officials have visited only once so far. They give medicines, but I find them useless and have stopped taking them,” said a patient.

On the other hand, as per the latest ‘TB India report 2019’ released by the Centre, 20,382 new cases of tuberculosis were detected across Telangana during the previous year, of which nearly 6,500 were from Hyderabad alone.

While states like Gujarat, Andhra Pradesh, Delhi, Karnataka, Maharashtra and Tamil Nadu had much higher number of cases, experts say that the rate at which TB is increasing in the city, is worrisome especially due to the link with tobacco consumption.

ALSO READ:  A Story Of A 'Locksmith' In Old City Of Hyderabad

While various research studies have established that smokers are more likely to be infected with TB, which can progress, and have more chances of dying due to TB, recent studies in the city have shown an upward trend in smoking.

“As per Global Adult Tobacco Survey (GATS2) nearly 28% of the adult population in 2017-18, that is, nearly 275 million adults consume tobacco in some form or the other and this adversely impacts TB case management due to the strong association between tobacco use and TB treatment outcomes.

Nearly 8% of tuberculosis cases can be attributed to tobacco use,” as per the report. The report further pointed out that in Telangana, 26% of the new TB patients detected had a history of tobacco usage.

Within the city, several congested pockets add to the problem. “Urban slums in the southern and western parts of the city like Jangampet, Babanagar, Shaheenagar, Erakunta, Wadi, Bandlaguda, Ghouse nagar, Hashimabad, Indira Nagar, Noori Nagar, Milad Nagar, Quba Colony, Ahmed Nagar, Jehangirabad in the south and Habeebnagar, Jira, Nampally, Dhoolpet, Aghapura etc in the west are reporting a serious public health crisis with a high number of new cases of TB and multi-drug resistant TB,” said Mujtaba Hasan Askari of Helping Hand Foundation, adding that illiteracy, large families and congested living with lack of open ventilation make matters worse. “This puts the close contacts on high risk of exposure, if one or more in a family are sputum positive,” he added.

Meanwhile, Telangana is among the top 10 states in the country having a high incidence of TB and a major challenge continues to be the social stigma attached to the disease. “The social stigma associated with TB is still prevalent and many patients don’t like to reveal their identity. This leads to spread of infection in the society.

Scholars, NGOs and government need to work out strategies to root out the stigma. Mahila mandals, self-help groups, religious committees and NGOs can play an important role in the fight against TB. They should be made aware, given proper training, encouraged to find more and more cases of TB with their follow up till treatment completion,” said Dr. Prashant Kokiwar, chairman, State Task Force Committee, Telangana State. #KhabarLive

Temperatures Rise In Telangana As Monsoon Takes A Break