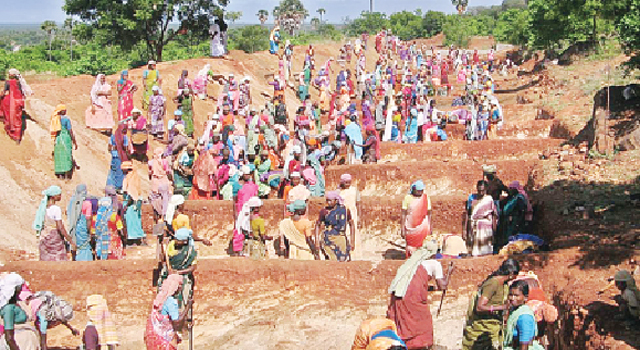 It seems all is not well with the Centre’s prestigious Mahatma Gandhi National Rural Employment Guarantee Scheme (MNREGS), an initiative to provide livelihood security to rural households in the country by providing at least one hundred days of guaranteed wage employment in every financial year.

With interminable delays in conducting social audit on MNREGS, allegations are flying thick and fast that there is corruption taking place on a large scale and job seekers are denied benefits of the scheme.

Though social audits have been taken up on the scheme, they are scant in number and have only been taking place here and there, allowing the officials of the scheme to indulge in corruption. In the social audit conducted in March last year, in 70 places, as much as Rs 31 crore of irregularities have been found in the works done with an expenditure of Rs 430. The audit says that records have been given for works worth Rs 345 crore out of total works worth Rs 430 crores being undertaken.

The field level reports suggest that officials from field assistants to Mandal Parishad Development Officers have been indulging in corruption. The social audits found that officials had been drawing money for works which had not been done.

The number of workers was also shown high and wages of fake workers were drawn by officials. Even online records were also fudged with the help of staff of other departments. Amounts had been drawn for the purchase of the material without procuring them.

Though it has been mandated to conduct audit for two times every year, they have been taking place only once in two years. While the rules say that each work should be audited, no effort has been made in this regard.

Due to the rampant corruption, most of the job seekers allege that they are deprived of works. Though permissions have been taken, the percentage of works grounded is about 70 per cent denying the works to several job seekers.

Workers alleged that they had been told that works were not available though they did exist. It has been observed that job seekers were not provided with 100 days of work as per the rules and most of them have been given only 70 days of work. However, the officials have been allegedly claiming the money without doing the works. #KhabarLive