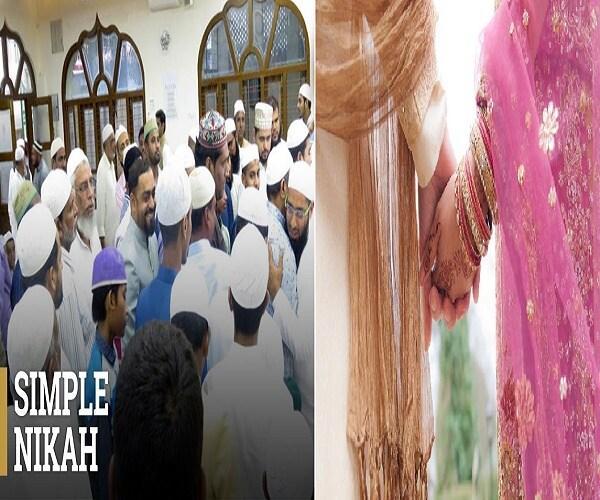 At a time when extravagant weddings have become a norm in Hyderabad, one man wants to change this trend. He is on a mission to change the priorities, especially of the Muslim community, and make marriages simple yet more meaningful.

Aleem Khan Falki, who heads the Socio Reform Society (a forum to fight social injustice), has introduced a novel idea to make weddings a simple affair, with no dowry and minimum expenses. And it has worked, he says.

Aleem Falki and a group of friends and associates have been offering a wedding hall almost free of cost to individuals who want to solemnise their weddings without any expenses. However, they have to fulfil certain conditions laid down by the group.

Explaining the idea of a simple wedding to #KhabarLive, Aleem Falki says, “We are providing the Amaan function hall located at Mehdipatnam near Amba theatre to individuals, but they need to meet our conditions. First, the ‘Nikah’ (marriage ceremony) should be performed at a nearby mosque and ‘Walima’ (the marriage banquet) should also be done on the same day. Dowry demands are strictly not entertained. Videographers cannot be hired.”

The couple getting married should also allow one of the representatives of the organisation to convey the message of simple weddings to the guests gathered for the nikah, for 15 minutes.

“We also counsel the bride and groom separately, apart from their parents, on this subject. Our volunteers encourage them to restrict the guest list on the ‘Walima’ function as well, in order to curtail expenses,” he says.

Speaking about what led to the idea, Aleem Falki says, “Several middle-class people are on the verge of bankruptcy due to social pressure to host a lavish wedding. Many are forced to sell their ancestral properties, take loans, or spend their life’s savings. If one individual has three to four daughters, he is spending a huge sum of money on their weddings as it has become a matter of prestige.”

Aleem Falki says the aim of this initiative is to take forward the movement of awareness about different social evils, including the practice of dowry. “Interestingly, several individuals are taking to this novel idea. After our awareness campaigns, around three to four people approach us to help them organise simple weddings every month,” he adds.

ALSO READ:  The Narayanpet 'Weaving Magic On Looms' Makes Everyone Happy With Its Creativity, Quality And Price!

Apart from Hyderabad, the team is active in several parts of Bengaluru, Maharashtra and Patna.

The society also takes the signatures of both parties and notifies an arbitrator, who can be approached in case of a dispute or even divorce.

Azmath Ullah Khan, the owner of the function hall and who is closely associated with the organisation, says his son was married in a simple manner at the hall. “Initially, I faced tough resistance from my parents. However, I was adamant to make my son’s function a simple affair. My son was like-minded in this matter. He didn’t want to put any kind of burden on the family of the bride and wanted to put a stop on lavish weddings,” he recounts.

“After attending my son’s wedding, three girls from my family also pledged that they would make their marriages a simple affair. They got alliances and are now settled down happily after a simple wedding. This was very heartening,” he says, adding that the hall is provided as a gesture of appreciation.

The organisation also propagates its idea on social media platforms, which is drawing more individuals. Abul Bari Hussain, media in-charge of the organisation, says, “We counsel them and put our conditions. We never differentiate between the poor and wealthy people who approach us, but our idea is clear. It must be a simple wedding.”

The idea has also been getting backing from several religious figures as well.

Moulana Husam Uddin Aqil Jafar Pasha, a member of the All India Muslim Personal Law Board, who has advocated for simple weddings, says, “Clergy should boycott lavish weddings that many families cannot afford. The credulous way of thinking should be erased. Religious scholars have to raise their voice against these types of evils and avoid these functions. The qazis should come forward and start a movement by boycotting to perform the ‘Nikah’ unless it is a simple marriage.” #KhabarLive

Why Some Indian Restaurants Have Lost Their Appetite For Zomato And...