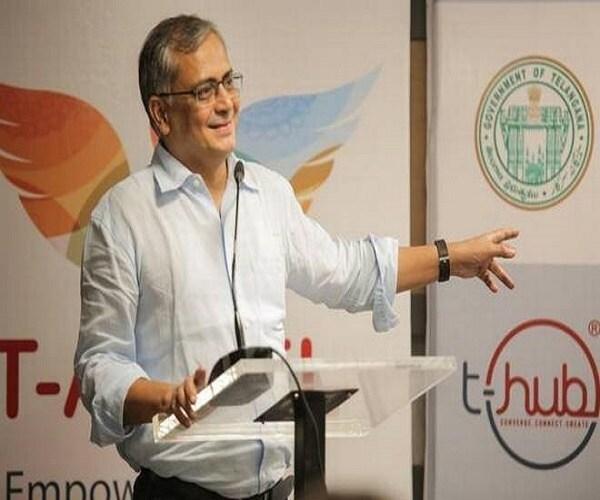 The year 2020 marks Telangan’s startup epicentre – T-Hub’s fifth year, so what’s changed happened in last decade? It is fair to say one can only wonder, ‘what next?’ Does the startup industry experience a plateau or would there be a slump?

T-Hub CEO Ravi Narayan refused to even think of such possibilities. When he came into the mix, he already had a few ideas on where T-Hub’s future would be. “We have built an infrastructure for innovation like none other in not just India, but in any part of the world,” he says, “Because not only does the State have an infrastructure for T-Hub, but also for several other organisations such as Telangana State Innovation Cell, RICH (Research and Innovation Circle of Hyderabad), We-Hub (a women-exclusive innovation centre), T Works, TASK (Telangana Academy for Skill and Knowledge) and other entities with which we are affiliated. It was a huge impetus for us to come from 400 startups from the time that T-Hub started, to more than 2,000 startups today in a short time of just four years.”

Quality, not quantity
For Ravi, however, it is not just the number of startups that matters, but the quality. These ecosystems take a while to stabilise and then build on the sound foundation. At this time, the backers of T-Hub had to manifest a widespread feeling of inspiration across young people who did not know that such support was available. This is how T-Hub set itself apart from other such entities; some were engaging in incubation but T-Hub went beyond the code of corporate innovation.

Naturally, the needs of the startups and the ecosystem had evolved, says Ravi, who took over from former CEO Jay Krishnan in January 2019. “We had to change from incubation to acceleration, so we took larger startups which had already matured over the course of the last four years, either because of us or independent of us, and provided them with a path to stay involved in the Hyderabad ecosystem… so they didn’t have to go to Bengaluru or to Singapore or to the United States.” Ravi continues, “Next we also charted a path to involve other guys who raised money, and put our arms around them; that said, we also created a startup innovation department with the nuanced way of involving and working startups throughout their lifestyles.”

Corporate innovation is also important to Ravi’s roadmap for T-Hub’s future and with the technology landscape changing rapidly, he feels it is vital to wrap one’s head around these changes. This collaboration and innovation can take between 18 and 24 months. Then T-Hub started bringing in more senior folks to their circle to keep the change happening. “That way we aren’t just evangelists, we are actually delivering to the ecosystems very specific outcomes.” One of these outcomes is, obviously, scaling.

Beyond the IT
What about values? Given technology is rapidly evolving, should patience be taught to startups? “An entrepreneurial journey isn’t easily replicable. Startups take on new ways of solving the same problems so everything is different. We encourage a lot of entrepreneurs to continue to stay true to the fundamentals of business, in terms of addressing the needs of their customer or consumer. We also have an alumnus programme where people can come back and revisit newer principles too.”

Ask Ravi about the instance a startup is no longer sustainable and has to shut down and he quirks a smile. As a serial entrepreneur, he does understand, explaining that he has “more scar tissue on his back” from his past experiences which mould his current and future choices. “We pride in being an accelerator not only for generating success but also in generating failures. Because if people are on the wrong path and their business models are fundamentally flawed, they’re just getting by and doing okay. Also, many first-time entrepreneurs struggle with ‘what does the business wants versus what do we want?’ That said, many do not when to quit their full-time jobs and there is no formula that I can give them. It is a very personal decision at the end of the day.”

Phase Two
T-Hub Phase Two is underway in the Raidurg area near Ikea and Novartis. The upcoming centre will first house more than 1,000 startups and claims to be the world’s largest incubator at 3.5 lakh square-feet over three acres of land. According to the T-Hub team, the cost of this project is ₹276 crores.

Ravi reflects it has been a fruitful journey working with T-Hub and its constituents who continue to make the State a strong symbol of progression, adding the resident startups teach him as much, if not more, than when he teaches them. #KhabarLive

Why The New World Of Retail Buying Gets Automated?

Don’t ‘Milk’ It For Politics – ‘Breastfeeding’ Intrinsic To Life