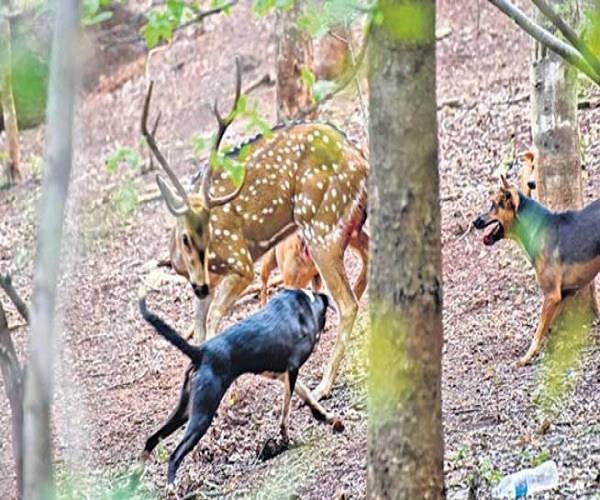 A shocking incident of a pack of stray dogs attacking an adult stag in Ananthagiri Hills has brought into sharp focus the threat posed by these strays to wildlife here in the popular tourist spot of Ananthagiri Hills in Telangana.

Due to lack of animal birth control measures, the population of stray dogs in villages around Ananthagiri forest in Vikarabad district has gone up by leaps and bounds. Since it is one of the hotspots for tourism being close to Hyderabad, a number of tourists throng the area.

Recently, a special team of wildlife photographers led by Sundareswaran, Balakrishna Marar and Vinod were on a birding trip to Ananthagiri Hills. As they walked down the steps from Ananta Padmanabha Swamy Temple to enter the forest area, Sundareswaran R Vetaikorumagan saw a pack of four to five stray dogs attacking a stag. As the deer was bleeding profusely, the three wildlife photographers threw stones at the stray dogs to save the wild animal from the dogs.

The deer took the opportunity and ran up the hill in a bid to escape from the stray dogs. However, the dogs followed it up the hill. Since all three birders were aged over 55 years, they could not follow them up the hill to save the stag or see its fate. The wildlife photographers observed that the chances of its survival were bleak since it was already bleeding badly and looked very tired.

The incident sparked a discussion in wildlife circles as the three birders also took some photographs of the pack of stray dogs attacking the stag and posted them in these groups. Founder of Animal Warriors of India Pradeep Nair has appealed to the Forest Department to initiate ABC (Animal Birth Control) in the surrounding villages of Ananthagiri forest area besides initiating other measures to restrict the entry of stray dogs into the forest area.

Meanwhile, the members of Hyderabad Birding Pals (HBP) and Animal Warriors of India, who got involved in wildlife conservation activity in and around Hyderabad, are planning to submit a representation to Principal Chief Conservator of Forests, Telangana, seeking his intervention to protect wildlife from stray dogs in Ananthagiri forest area.

Phankrishna Raavi, a seasoned birder, said visitors to Anantagiri Hills are dumping food in the forest area, which attracts stray dogs. He has urged the Forest Department to put a collective effort to make all departments and responsible citizens stakeholders to make the forest area free from dumping of garbage and leftover food. #KhabarLive

More Than Just ‘Ice Cream’ – The ‘Frozen Treats of Summer’...

Everything Is Temporary In The New Capital Of AP – Amaravati!