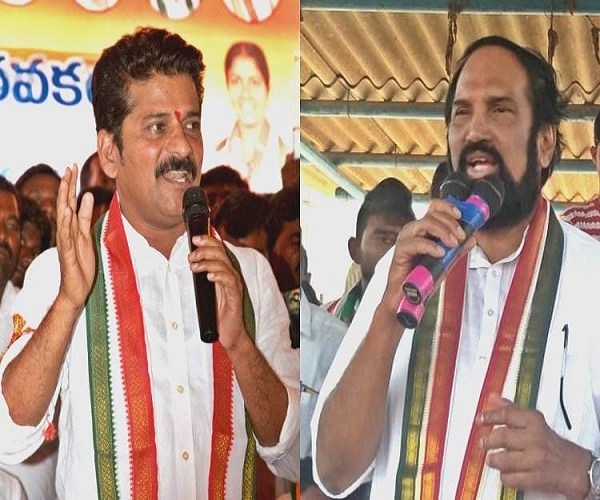 Recently, Revanth Reddy registered a strong protest and urged Telangana Congress Committee in-charge RC Khuntia to give a show-cause notice to Uttam for announcing his wife’s name, Padmavathi Reddy, as the candidate from Huzurnagar, without seeking the consent of the party.

Uttam had made the announcement recently in Suryapet, much to the dismay of Revanth, who joined the party in 2017.

The Huzurnagar seat fell vacant after Uttam, who had won the seat in the 2018 Assembly Elections, resigned and contested in 2019 Lok Sabha polls from Nalgonda. Revanth had backed Chamala Kiran Reddy sought a ticket for him. However, senior Congress leaders like Jana Reddy, Komatireddy Venkat Reddy and Bhatti Vikramarka threw their weight behind Uttam, and called Revanth an ‘outsider’.

The fight between Uttam and Revanth has been brewing ever since Revanth met Congress President Sonia Gandhi earlier this month and projected himself as the next party chief. However, after several leaders like V Hanumantha Rao raised objections and threatened to quit if the party reins were given to Revanth, Uttam was retained as the chief.

Nalgonda MLA, Komatireddy Venkat Reddy on Thursday told the media that Revanth is pitching the name of a nobody, who can’t win the seat, and said that the former Kodad MLA was the right choice.

Speaking to #KhabarLive, a senior leader said that the fight between Revanth and Uttam has been ongoing for a long time. “Of course, it is evident that Revanth is seen as an outsider and the senior leaders don’t want to work under him.”

The leader while maintaining that Uttam violated the protocol, said that only Padmavathi could win the Huzurnagar seat. “She has been working there for the past few months, and Uttam wields a lot of power there, so we will win that seat if Padmavathi is given the ticket,” he said. #KhabarLive