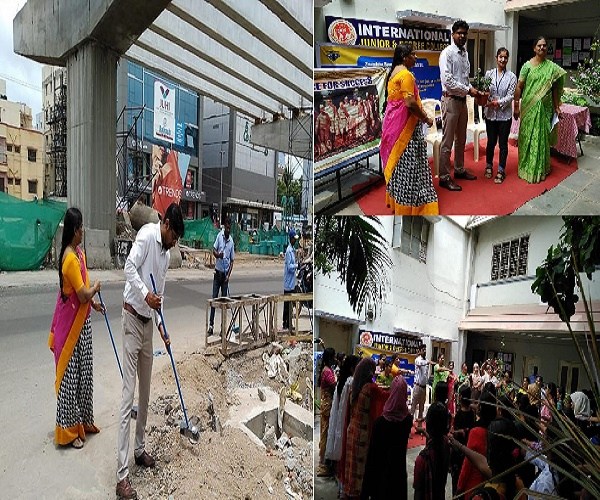 “Why is this road so dirty?” I asked, looking at the empty packets swirling about in the brewing dust storm. “Oh, there is a school or college along this road, and children eat chips and ice-cream on the way to the school or college bus and throw the packets everywhere”.

“Is the inside of the school or college equally dirty?” I asked, knowing fully well that the inside would be a bit cleaner than the road. Not because the children were cleaner but because the afternoon shift of cleaners would have swept it up by now.

Maybe part of the problem here is that we always have someone to pick up after us. It is natural to throw things on the ground in a culture where picking it up is someone else’s problem. Even worse – some one else is paid to do that. And that person earns less than the person doing the littering. The hierarchy writes itself – you are superior if you create litter and a mess, you are inferior if you clean up.

This is seen in schools and colleges too – a news item about a principal making students clean the school created much outrage. How can students – those sent to imbibe higher order skills at schools be asked to perform lower order tasks? Did the school or college not have cleaners? Or in many other places – did they not have lower caste students to do this work?

Casteism, sadly does show up in many schools in this form. The news has a steady drip of reports where Dalit students were denied classroom learning and asked to clean the school premises. Again – cleanliness not seen as a higher order virtue but a way of discriminating.

When children litter, it is the most distressing thing ever. I often turn around and ask them – would you like to live in a garbage bin? Because this is what you are creating around you. I am not sure how many would like to live in a garbage bin, but most feel quite sure that the garbage is not going to be their problem at all. To bring swachh Bharat to schools will be a bit of a challenge for schools.

Putting an end to littering will be the easy part, because that can be policed, and children can be bullied or penalised into ensuring they throw things in dustbins. What is going to be challenging is to ensure that students are mindful of clean toilets, school walls, and even the dust that seems to accumulate in school desks and school windows.

A look at most schools and the grimly grey-brown filthy windows makes one’s heart sink. Will schools and students be able to change that? Will they be able to transform schools into shiny,happy, healthy spaces? Yes, #KhabarLive noticed a college named International Junior & Degree College located at Shaikpet area in Tolichowki, Hyderabad initiated and completed the cleanliness in college, with students, staff and other surrounding people under the leadership of founder and social activist Shashikala.

What can schools do:

Swacchh Bharat is a step forward to being treated with respect by the rest of the world, and a step towards mindful living in pleasant and healthy environs. Let schools lead the way – stand for swachh schools that build a swacchh Bharat. #KhabarLive

Save ‘Peerancheruvu Lake’ – A Dying Lake In Hyderabad Suburbs