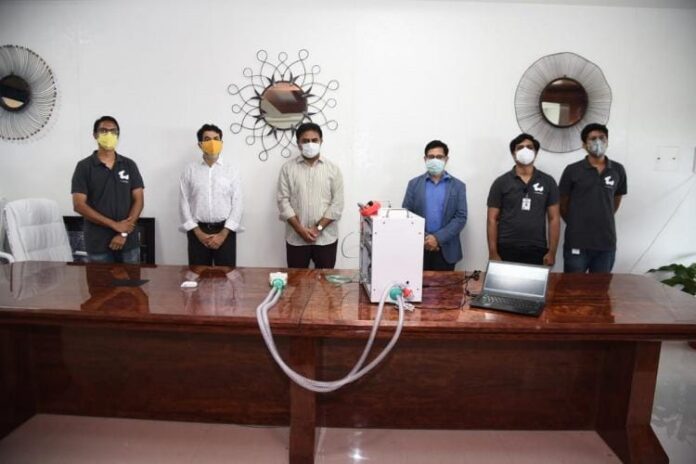 T-Works, Telangana government’s hardware incubator, and prototyping lab have developed an affordable mechanical ventilator for emergency use, in collaboration with different start-ups and corporations. The open-source Bag-Valve-Mask (BVM) ventilator, which costs Rs 65,000 to Rs 1 lakh, is expected to come handy if the COVID-19 pandemic spreads and can be deployed for worldwide use.

T-Works CEO Karampuri Sujai on Monday gave a demonstration of the ventilator developed under the guidance of Nizam’s Institute of Medical Sciences (NIMS) – a plug and play device that operates similar to existing ventilators and is focused on Acute Respiratory Distress Syndrome (ARDS) affected patients who are at higher risk.

In the demonstration given to Telangana Information Technology (IT) Minister KT Rama Rao, the CEO said that NIMS hospital tested the device and they plan to go for further certifications. He said T-Works was ready to partner with local manufacturers for bulk manufacturing.

While it does not compete with the sophisticated ventilators used in hospitals, it can come handy in an emergency. It can gauge the tidal volume, breaths per minute, oxygen concentration, minimum residual pressure, and other health parameters.

The low-cost ventilators can be used by primary health care centers in rural areas and in ambulances. The developers believe such ventilators will be useful at a time when there is a worldwide shortage of conventional ventilators, which costs anywhere between Rs 5 lakh to Rs 15 lakh each.

The project involved over 20 members of various startups and corporate, including talent deployed by Honeywell and Qualcomm. Apollo Hospitals, Sunshine Hospitals and Prathima Hospitals, IIT Hyderabad, Mouser, and GE Healthcare, Specteochem Instruments and others were also part of the project.

T-Works, which is working on multiple projects in collaboration with innovators from across India, earlier helped in the development of aerosol boxes, protective equipment to aid the frontline healthcare providers involved in the treatment of COVID-19 patients. #KhabarLive

Many ‘Kirana Stores’ And ‘Roadside Eateries’ Struggle To Run Business On...