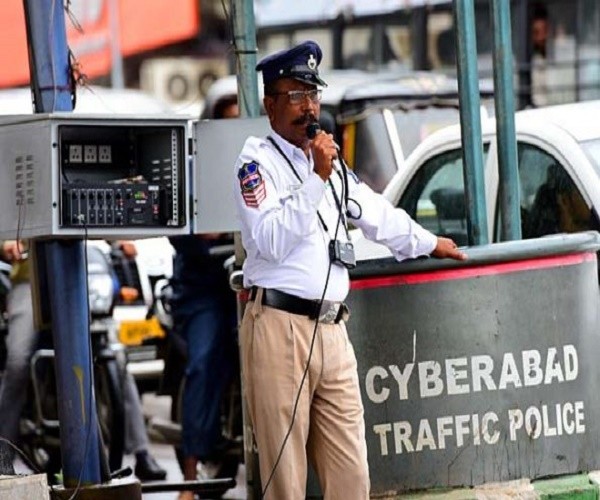 Traffic has always been a major issue in Hyderabad, and the increase in population added to the menace. With the traffic come the traffic rules, and rule-breakers too, and the job to keep them in control is the toughest of all.

However, traffic police have always been close to people – to guide commuters, issue a chalan or educate them about the ill-effects of underage drivers or drunken driving, etc. Even to keep in touch with people regularly, the department continuously posts traffic updates and uses humour to get their message across social media.

Nevertheless, to alert and educate people, traffic cops are going live with public announcements. They instruct the commuters and keep the traffic in check. “To prevent people from breaking traffic rules, traffic cops are trained at traffic training institute to give announcements to the public at traffic signals. We have planned to instal 20 systems in 20 areas, and we have installed in 12 areas till now, and 8 more are yet to go,” says Vijay Kumar SM, DCP, Traffic Cyberabad.

On the other hand, they are recreating a scene of KitKat advertisement on the traffic-filled roads of Hyderabad. Each of the traffic cops is conveying the content in his unique style. A few bring out their serious expression, while a few engage people with their humorous phrases.

As cops don’t know who the traffic violator is, they address people using their dress as code, such as ‘Hey, blue shirt with red luggage bag, Hey blue sari woman who’s stopping the auto in the middle of the road, Hey girl in yellow who’s crossing the road between signals’, and many more such expressions making people laugh out loud.

ALSO READ:  #GadgetReview: What Makes The 'Honor 8X' Shine Out In A Crowd?

As safety and precautions are important, Seetharam Naik, a head constable, woos people at his signal. With his witty and proactive nature, Seetharam engages the public leaving a smile on the face of commuters. “We are trained at traffic training institute and all my colleagues actively take part in public awareness announcements.

Sometimes, even after repeatedly announcing, travellers don’t even bother and cross the road in between signals. We do not intentionally say anything to people, but inserting a pun here and there keeps them engaged and reminds one and all to not repeat it,” says Seetharam who has a great following at Gachibowli signal for his sense of humour.

Another traffic cop at Secunderabad started it much earlier, and even without holding a mike he shouts aloud and requests people to wear helmet. He often says loudly, ‘there are people waiting at home, do not ignore, please wear helmet.’ The old man’s voice is sure to grab everyone’s attention and his effort is clearly noticeable. #KhabarLive