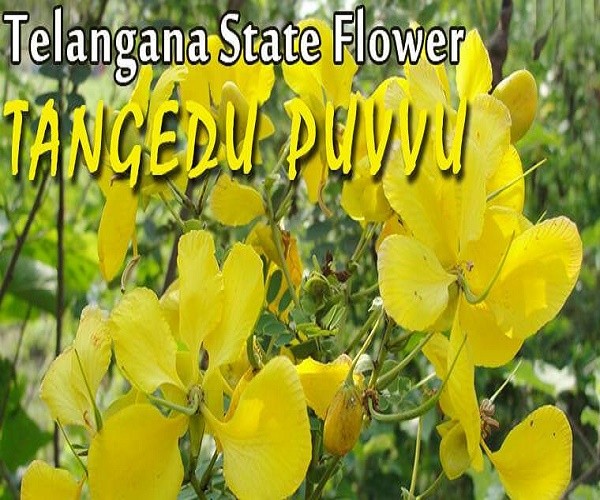 Every state has its own association with its landscape and thriving biodiversity. Certain flowers, animals, trees etc., are considered auspicious and the people share an affinity with them. Telangana State Government has announced four symbols in the year 2014, which represents the state.

These symbols are State Animal, Bird, Flower and Tree.Here’s one such extensively growing flower species in the state of Telangana that is associated with the region’s folklore and culture. It is none other than Tangedu, also fondly called as TangeduPoolu (Tangedu flowers). The scientific name of this flower is Cassia auriculate.

Believed to possess many useful and medicinal properties, the flower grows widely across allregions of Telangana and the mere sight of Tangedu is consideredpleasing to the eye, in addition to its health enhancing properties. Scholars and culture enthusiasts of the state believe that in many ways, the flower continues to reflect the different realities of the life of the common man.

Tangedupoolu… peydapoolu, peydalapoolu (Tangedu are poor flowers, poor’s flowers) is a line from TangeduPoolu, an anthology of poems, written by N. Gopi, a SahityaAkademi Awardee from the district of Nalgonda. The yellow flowers are believed to reflect the many realities of the life of the common man and the poor. Hence, it was appropriately chosen as the State flower in the year 2014.

The cultural importance of Tangedu is well known, particularly in rural Telangana during Saddula Bathukamma, which is integral to the way women, and in general the working class, celebrate the festivals. Flowers like rose and jasmine are considered elite, while Tangedu and Ganneru are adorned by the women living in villages.Tangedu flowers are seen in the images of goddess Parvathi in rural Telangana.

There are two prominent events in local culture where these flowers appear. The newly-wed couples offer bonam to goddess Parvathi under Tangedu tree, during the lunar month of Bhadrapada when these buds blossom and are used for Bathukamma celebrations.The Bathukamma festival is a highly cherished state festival of Telangana which is celebrated mainly by the women of this region.

Celebrated during Navarathri the festival marks worship of the `life-giver’ Bathukamma, with the women of the state with flowers, seeking her blessings for prosperity and a good year ahead. For the entire nine days, in the evening, women, especially young girls, gather in large numbers with their Bathukammas made of flowers, out of which Tangedu has a special prominence. Colours, flowers and water are all considered intrinsic to the festival.

There are many varieties of Tangedu like NelaTangedu, TayidiTangedu, AdiviTangedu, SemaTangedu. The flowers are known for their medicinal values.Tangedu flower is accorded the ritual respect equal to goddess Durga. On the last day of Bathukamma, women create floral stacks and immerse them in lakes, rivers and other water bodies, which spreads the medicinal value of the flowers as the water seeps below the surface, replenishing the ground aquifers.

The gregarious flowering pattern of Tangedu flowers symbolizes the mobilization of all human resources for Telangana state’s development. Hence, Tangedu is respected and admired for its beauty, useful properties and has been accorded an official identity, attesting its importance for the people of Telangana. #KhabarLive

Why GHMC Using ‘Banned’ Pesticides For Mosquito Control In Hyderabad?