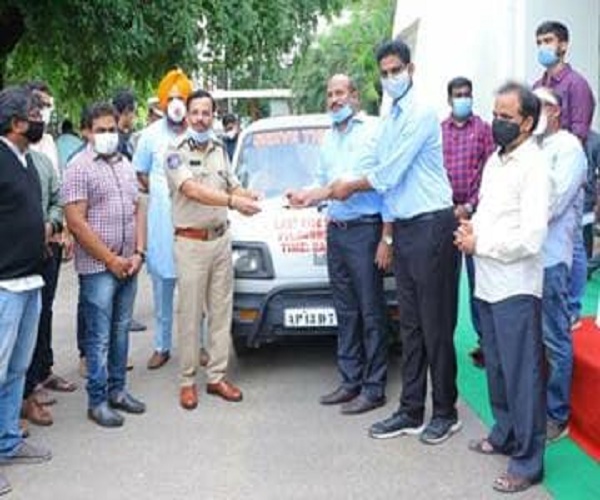 While fighting the stigma associated with the disease was a challenge, a personal experience prompted a team of IT professionals to start something unique and much needed.

It was around 4 am on July 24 when Bellam Srinivas, an IT professional, received a phone call from the United States. The middle-aged woman at the other end heaved a sigh of relief. She told Srinivas that her 75-year-old uncle had expired three days ago after battling with Covid-19 and that the body was lying at the Gandhi Hospital mortuary in Hyderabad with no one to claim. The entire family of the deceased man, Narasimham, was in quarantine, with some of them have tested positive for the disease. After interacting with the hospital authorities, the woman was clueless as to what needed to be done.

Soon Srinivas’ team reached out to the authorities concerned and the cremation was completed by 4 pm that day. The thank-you call that he got that evening, showering prayers and blessings, Srinivas says was priceless.

This was, however, not the only call received by Srinivas. A few days earlier, another caller from the US had requested him for helping with the transport and last rites of his father, a 70-year-old who had died of COVID-19, while his 65-year-old mother was still in the hospital. All the formalities, including settling of the medical bills, as well as transport and the final rituals, were organized by his team.

“We are a team of 10 IT professionals who have come together to serve the needy during the COVID Pandemic,” says Srinivas, who handles the team’s call center. The team has been active ever since a nation-wide lockdown was announced in March 2020, initially distributing food packets and grocery kits.

Now, with new challenges of the pandemic emerging, there was a need to do more. While fighting the stigma associated with the disease was a challenge, a personal experience prompted them to start something unique and much needed. “The last ride to a cremation ground 6 km away costs more than a flight ticket to a foreign country. We realized this when the mother of one of our friends passed away 45 days ago. While the family was in loss of their own, the trauma and agony caused by things like an ambulance to the graveyard or other arrangements are immense,” says activist K Sai Teja.

They pooled in their money to buy the first vehicle and with the help of Cyberabad police found a corporate donor, too, in Silicon Business Solutions private limited. On July 4, the first vehicle was launched as a pilot project in Cyberabad police jurisdiction. The response was huge and three weeks later, on July 27, they tied up with the Hyderabad police and added one more hearse and extended services to Hyderabad as well. Also in the pipeline is a similar initiative for areas under the jurisdiction of Rachakonda police, thereby covering the entire greater Hyderabad region.

Srinivas says they have received around 250 calls so far. Most of them were from people asking for ambulance services from home to hospital or vice-versa. There have been some requests for isolation kits and blood donors as well.

The team has employed two drivers and three body-handlers, and have performed eight cremations as of date. Our phones are available all the time and the services are available between 8 am and 6 pm, though we wish to make it a 24X7 service, he adds.

“Our hearse service is free and we bear the charges of around Rs 25,000 at the graveyard or crematorium too. At this moment, we request the government to regulate these charges or at least subsidize them for poor people who cannot afford it,” says Sai Teja, adding that he has come across several instances where families have abandoned their bodies leaving them for anyone to cremate. “It is so unfortunate that people fear they would contract the viral infection from the deceased. There are multiple challenges associated with the death of a COVID patient, ignorance is the worst. We just want to ensure cremation of bodies in a dignified way.,” he says.

While flagging off the first hearse vehicle on July 4, Cyberabad police commissioner VC Sajjanar had recalled how finding an ambulance to transport a COVID-19 victim’s body and a cremation ground that allows for the final rites of such a person are all challenges involved in the present pandemic. He had appreciated the team for their excellent service to the society and hoped more NGOs came forward taking inspiration from them.

The task at hand is not over yet, says Sai Teja. Recently, they started an online portal, by joining hands with the Society for Cyberabad Security Council and the Cyberabad police. “We have arranged for 40 plasma donors so far,” he adds. #khabarLive #hydnews