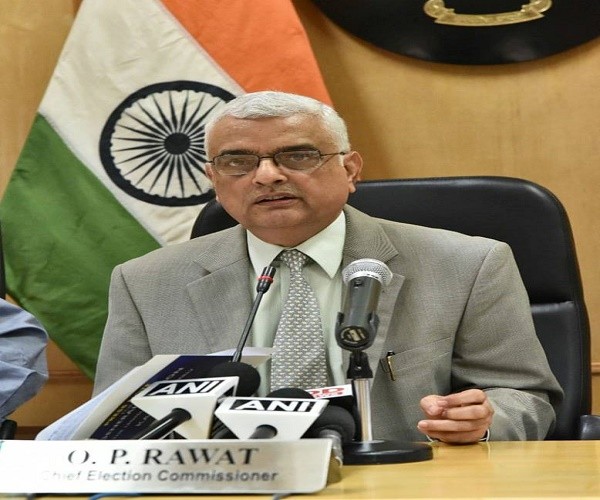 The Assembly elections will not be held in Telangana along with those in four states this year-end if the preparedness of the poll machinery in the southern state is not “satisfactory”, Chief Election Commissioner O.P. Rawat said.

Elections can be held in January or February in Telangana which has time up to March 5, 2019 for constitution of the new Assembly, he said.

“I can’t say. There is a compulsion that it must be held within six months but let me clarify there is no such law. This six months time frame is based on a Supreme Court ruling. The apex court says elections must be held at the first instance after dissolution of a state assembly and should not be delayed more than six months,” Rawat told #KhabarLive in an interview.

He was asked about the early possibility of polls in Telangana where the government headed by Telangana Rashtra Samiti (TRS) has dissolved the Assembly and sought early elections.

Pressed further if there was a possibility of the polls in Telangana being held separately from those to be held in Madhya Pradesh, Rajasthan, Chhattisgarh and Mizoram, he said, “If their (Telangana’s) preparedness is not satisfactory, we will not take a risk (of holding immediate elections).

“But if the state is prepared, there is no reason we can’t hold elections there along with Rajasthan, Madhya Pradesh, Chhattisgarh and Mizoram. We can hold polls if Telangana is prepared. But there is a big ‘if’,” he said.

Rawat said that since the Supreme Court wants to hold elections at the earlist or as soon as possible, “we have taken immediate steps” for the conduct of polls.

Asked if it was still a matter of work to be done before the Commission comes to a conclusion on the election schedule in Telangana, the CEC said: “Correct.”

Giving the background of the process of elections in Telangana, he said “since Telangana Assembly has been dissolved, we immediately started preparations for the next assembly polls in the state. We have asked the Chief Electoral Officer (CEO) of Telangana about the level of preparedness. We got his inputs and have sent a team from here.”

The Telangana CEO has said he “is battle ready, but we will wait for the report of our team. We always verify. The Commission always verifies on the ground whatever claim is made about poll preparedness,” the CEC said.

Rawat indicated that if Telangana polls were not held along with those in four states, then it would not be held close to completion of the polls in those states, where elections should be completed by mid-December.

Asked whether in that case polls in Telangana could be pushed to December, he said “it can be in January or February. They have time up to March 5.”

Giving reasons as to why polls cannot be held in close succession, he said: “The tradition has been to not hold elections in a series because the result of one affects the outcomes of others. It is not held in that proximity. One or two months gap is ok. Not 10 days (gap),” he added.

Asked about the controversy regarding the talk of a virtual schedule by Chief Minister K. Chandrashekar Rao after dissolving the Assembly, Rawat said, “This is not acceptable. This is wrong. The sole authority to announce elections is vested with the Election Commission. It is for the poll authority to announce a poll schedule. Nobody else can do it. It is wrong. It is not legal.”

To a query about the Chief Minister’s claim that he had talked to the CEC, he said: “The CM never met us or talked to me.”

It was the chief secretary, who met officials in the Commission and dropped the hint about the dissolution and early polls.

A former Chief Secretary from the state also met officials and dropped the hint. Both were told by EC officials that “we don’t speak on hypothetical situation. The Assembly is still there,” he said.

To queries about lack of updated rolls in Telangana, Rawat said: “There is no point in time when there is no electoral roll. There is always a roll. In Telangana too, we have an electoral roll with reference to January 1, 2018. Only thing is when polls are to be held, the Commission takes the pain of revising the electoral rolls to provide one more opportunity to those people who missed the bus.”

In this connection, he said, the election authorities in the state have been asked to take up the second summary revision of rolls and complete it by October 8 so that the rolls are ready for the polls. #KhabarLive

Why Indian Political Parties Play Upon Fears Of Muslims?

Why Observers Believe TRS Election Manifesto Should Be ‘Smart’ In This...