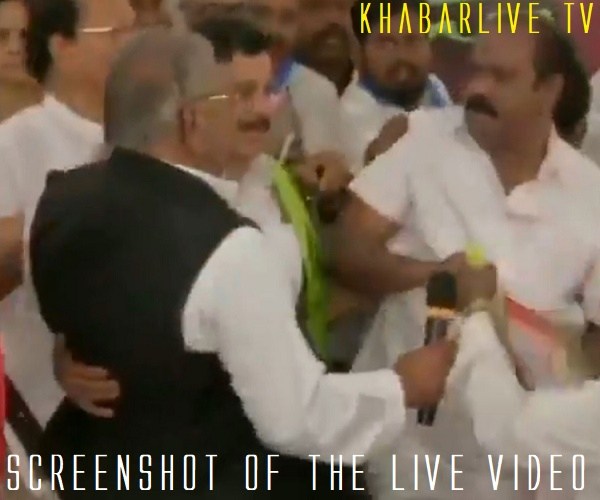 A scuffle broke out between Congress leaders V Hanumantha Rao and Nagesh Mudiraj during the protest by opposition parties today in Hyderabad against state govt over the issue of state board intermediate results.

At an opposition protest meet in Hyderabad, senior Congress leader V. Hanumantha Rao clashed with another leader publicly and collapsed during a fight over a chair.

#WATCH Telangana: A scuffle broke out between Congress leaders V Hanumantha Rao and Nagesh Mudiraj during the protest by opposition parties today in Hyderabad against state govt over the issue of state board intermediate results. pic.twitter.com/lyUsD8ZDKU

Former member of Rajya Sabha Hanumantha Rao and Telangana Pradesh Congress Committee (TPCC) spokesman M. Nagesh pushed each other on the dais in the presence of AICC General Secretary and in-charge of party affairs R.C. Khuntia and leaders of various opposition parties.

The commotion broke out during a meeting organised by the opposition parties at Indira Park to protest a goof-up by the Telangana Board of Intermediate Examination in results declared.

Rao, who was holding the mike to invite leaders on the stage, took objection to Nagesh occupying a chair meant for Khuntia. A heated exchange ensued between the two and soon they started pushing each other even as other leaders tried to pacify them.

In the melee, Nagesh collapsed on the ground. He stood up and pushed Rao, who too fell down leaving the leaders and other protestors in shock.

The day-long protest meeting was called by the Congress and other opposition parties over the bungling by the Board of Intermediate Education in the results of Intermediate (11th and 12th standard).

The parties had also invited parents of 22 students who committed suicide over the failure in the exams. The opposition has blamed the government for the suicides and demanded compensation for their families. #KhabarLive