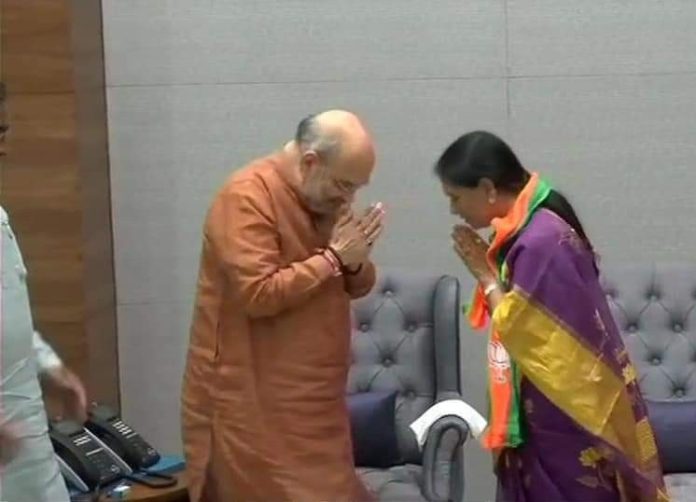 One of the senior politicians in Telangana Congress party, Campaign Committee Vice Chairman, former minister DK Aruna is all set to quit Congress. This is not all. DK Aruna is joined the BJP.

BJP’s Ram Madhav has held deliberations with DK Aruna for over 45 minutes at her residence earlier today. During the talks, Ram Madhav has made DK Aruna speak with BJP national chief Amit Shah over phone. Apparently, Amit Shah has promised her of ‘bright future’ if she joins in BJP. After assurance, DK Aruna has left to New Delhi.

It is learnt that BJP wants to field DK Aruna in Lok Sabha election (Mahaboobnagar parliament seat) on its party. DK Aruna has been given assurance of a significant post if NDA returns to power in 2019 general polls.

DK Aruna’s exit will certainly be a big shock to Congress as she’s one of the strongest leaders in Congress from Gadwal. She won consecutively in 2004, 2009 and 2014 Assembly polls from Gadwal. While other Congress seniors like Sabitha Indra Reddy are looking at TRS, DK Aruna’s possible entry into BJP is certainly a shocker. #KhabarLive

Don’t Give Coverage To ‘Harish Rao’, KCR’s Diktat To Media!

Jagan Will Get Space In Telangana Secretariat To Operate Office In...