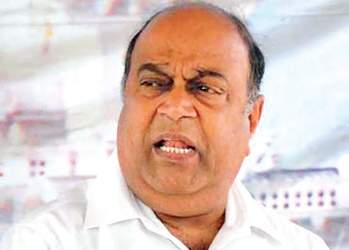 Just four days ahead of the proposed Bus Yatra to be undertaken by the Telangana Pradesh Congress Committee (TPCC) leadership to bring unity among party seniors, the ongoing internal squabbles among them came out in the open on Thursday. The members are sparring over the proposed induction of BJP leader Nagam Janardhan Reddy into the party.

At a time when AICC high command gave its nod for the entry of Janardhan Reddy, former TDP minister and BJP man, into Congress, MLC Kuchakulla Damodar Reddy, belonging to the DK Aruna group, openly expressed his unhappiness over party leadership’s decision.

Damodar Reddy, who had earlier unsuccessfully contested against Nagam Janardhan Reddy as Congress Party candidate when Janardhan Reddy was in the TDP during 1999, 2004 and 2009 Assembly polls, criticised party leadership’s decision, saying that the move would do more harm than good to the party at grassroots level. The Congress leader, who belongs to the same district as Janardhan Reddy, said, “We will not cooperate with the party if Janardhan Reddy is inducted into it as he is against Congress’ ideology. Further more, he is not a strong leader in the district.”

Damodar Reddy disclosed that DK Aruna and he had gone to Delhi and requested AICC president Rahul Gandhi not to induct Janardhan Reddy into the party. “There is understanding between Jaipal Reddy and Janardhan Reddy. That is why Jaipal Reddy has prevailed upon the party leadership to admit Janardhan Reddy into the party,” he said. Interestingly, the Congress leader preferred to express his dissent on a day when AICC state affairs incharge RC Khuntia was in Hyderabad and was making efforts to resolve the differences among party seniors.

According to sources, even though followers of D K Aruna are against Janardhan Reddy, another senior Congress leader belonging to the same district, revealed that Janardhan Reddy joining the party was bound to happen. “TRS MLA Marri Sashidhar Reddy, who represents Nagarkurnool Assembly seat at present, is financially very strong. During a recent survey conducted by the TPCC leadership, it was revealed that our party can defeat the TRS MLA only when we field a strong leader like Nagam Janardhan Reddy,” the senior leader told KhabarLive.

4 TDP leaders to join Congress
Four senior leaders of the TDP are understood to have decided to join the Congress very soon. They are former minister E Peddi Reddy from Karimnagar district; Vanteru Pratap Reddy, who had unsuccessfully contested against the Chief Minister K Chandrasekhar Rao in Gajwel Assembly constituency in the 2014 polls, and ex-MLA couple – Kothakota Dayakar Reddy and his wife Seetha.

Bury differences: Khuntia to leaders
AICC secretary and state Congress affairs in-charge RC Khuntia on Thursday called upon his party seniors, who are crossing swords with each other in every district, to bury the hatchet and wage a “united battle” against the TRS government in the state. He said that the high command was making all possible efforts to unite various forces opposing the state government. #KhabarLive