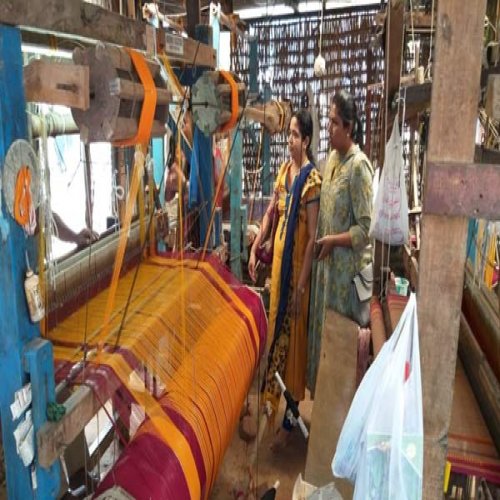 Weavers United Joint Action Committee says govt shedding crocodile tears on Telangana weavers and workers. Nothing has been done yet. All fake promises and political stunts by politicians.

Dasu Suresh, the chairman of the Weavers United Joint Action Committee, on Monday condemned Handlooms and Textile Minister KTR’s statement that their government was making Rs 90 crore available to the weavers to ease their operations and to combat economical crisis thrown by Corona virus.

Dasu said in a press statement that it was unfortunate that the weavers were struggling with working capital issues. They have to use their own money which they deposited in the Thrift fund. It is saved by weavers to cater to their long-term needs.

“They are implementing a defective 50 per cent yarn subsidy scheme and providing yearly Rs 24,000 investment assistance as adjacent states.” Dasu asked KTR how many times the Kakatiya Mega Textile Park would be reviewed. Migrant weaver workers arrived at their home few years ago considering the Mega Textile Park to be functional soon amid government failure. They were unable to cope with the delay and returned to their workplaces like Bhivandi, Sholapur, Surat, Maharashtra and Gujarat.

Dasu said the minister should answer why the 50 per cent yarn subsidy promised by the government was not fully implemented. The TRS government completely weakened the political opportunities of the weavers.

The weavers’ fraternity leaders of the TRS party, however, have to open their eyes and stand by the weavers. Dasu also questioned the reason for lack of attention of Minister KTR to the fraudulent practices of corporate shopping malls. He also sought details about the Rs 5 lakh free insurance that KTR had announced three years ago during the 2018 election campaign in Sircilla. #KhabarLive #hydnews