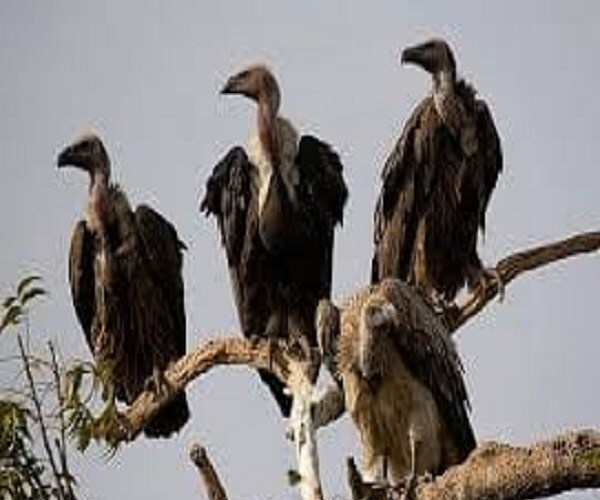 In Telangana, The Vulture Restaurant is becoming quite famous to feed the dissapearing birds Vultures. Indian vultures are dying out because of food scarcity and a drug called diclofenac. In Penchikalpet, a slow increase in numbers feeds hope.

It’s an experiment that’s filling India’s environmentalists with hope. Since 2013, the imposing Pala Rapu cliff in a remote corner of Telangana’s Penchikalpet forest range has become the site of an experiment that has helped restore a local colony of critically endangered long billed vultures. A vital part of the project: a “restaurant” for the birds.

“The survival of these birds relies heavily on the availability of food, which became our priority,” explained Penchikalpet Forest Range Officer, the driver of the experiment in Kumram Bheem Asifabad district.

The cliff is located at the confluence of the perennial Peddavagu stream and Pranahita river in the Nandigam forest. It is perfect for the high perching vultures because of its dense vegetation and availability of water throughout the year. The inaccessibility of these nesting sites acted to protect the long billed vultures from adversity, alongside other species of local fauna.

A number of ledges, made of fragmented sedimentary rock, dot the southern face of the cliff and have proved ideal for nesting, thanks to the excellent camouflage they offer. The scrawny and bald-headed vulture inhabitants blend into these brown and grey coloured rocky surfaces ensuring greater safety from the predators of the forest.

A chance discovery
The discovery of this vulture habitat occurred by chance in 2013. “I first heard of these scavenger birds from villagers around who called it Raga Pantalu, or a local aberration of Rabandulu – Telugu for vultures,” recalled Forest Range Officer Mohan. “During our exploration, we arrived at the base of this steep cliff and discovered it was a nesting ground for vultures.”

It took the officer about two months to confirm the identity of the species. “Once the identity was established conservation efforts were a logical follow up,” Mohan added.

Although large flocks of vultures have been sighted by residents of nearby villages until the 1980s, only a number remains today. A number of reasons can be attributed for the sharp decline over the last few decades: one cause is food scarcity, as old and disabled cattle were mainly sold off to slaughter houses.

But even when carcasses were found, the presence of diclofenac – a common anti-inflammatory drug administered to livestock for treating symptoms of inflammation and fevers – has had a significant impact in the reduction of vulture population, since Diclofenac causes renal failures in vultures. Another possibility is that the vultures of this region were victims to pollution in the Peddavagu stream caused by effluents from Sirpur Paper Mills at Kaghaznagar.

Conservation efforts
A conservation plan was put in place to achieve four major objectives – creating awareness, controlling the use of diclofenac, overcoming food scarcity for vultures and research to monitor the birds and their movements.

“We have organised awareness programmes at 66 villages surrounding the habitat, and also conducted classes in schools,” said Ram Mohan. “A number of surveys have also been carried in about 20 villages to check for the use of diclofenac for cattle.”

The in-situ conservation drives involve making food available for the birds and providing greater protection, in the hope that vulture breeding will lead to a subsequent increase in population. “To attract more scavengers to this habitat we established ‘vulture restaurants’ or feeding centres at various points on top of the cliff as well as on the bed of the Peddavagu stream,” Ram Mohan said. “To prevent other animals like jackals or hyena from feeding on the carcass we have protected it with a fence.”

Cattle are procured from villagers and quarantined for 15 days to ensure no trace of diclofenac is present in their bodies, before they are slaughtered and fed to vultures at the restaurants.

Intially, the response of the avian scavengers was rather lukewarm: the carcasses remained untouched on some occasions. The birds flew away, only to return hours later. “Although we cannot say this with certainty, the birds may have visited similar feeding centres in Gadchiroli district in the bordering state of Maharashtra, leading us to believe in the possibility of a meta-population,” Ram Mohan said, expressing hope.

At the base camp in Penchikalpet, a team of bird watchers, trackers and a field researcher has been entrusted with the responsibility of monitoring the birds, conducting a behavioural study and estimating their population.

From the seven adults which were spotted during the initial observations, the total population of vultures has grown to 32, seven of which are juvenile. Said field researcher M Ravikanth: “These scavenger birds now occupy nine nests and there is one roosting site on the cliff as well.” #KhabarLive