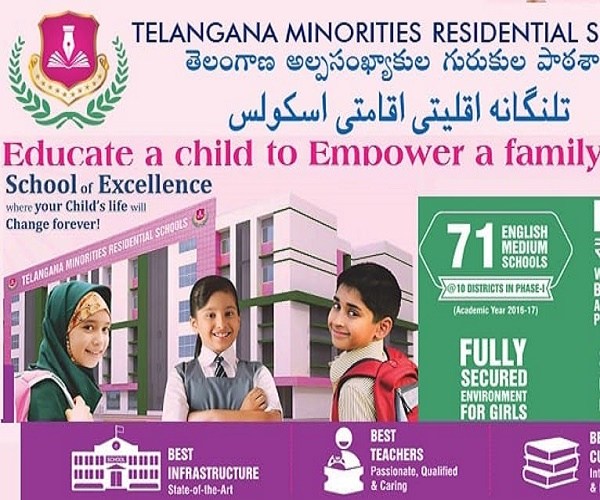 One of the two flagship Telangana Minorities Residential Educational Institutions Schools (TMREIS) is under criticism for alleged mismanagement and financial discrepancies. Finance joint secretary R. Ravi inquired into the allegations of irregularities committed by outsourcing consultants in September 2018 and had submitted his findings, but after a year no action has been taken.

Since 2015, 204 residential schools and 12 junior colleges have been established in the state with an enrolment of about 90,000 inmates. Out of this, 170 residential schools function in private buildings with a vast amount spent on the buildings’ rents. The government spent more than Rs 925 crore on these schools in four years.

The government formed a governing body to monitor the functioning. It comprises ministers, secretaries for minorities welfare, finance, social welfare, the Intermediate Board, and the Director, School Education. But no meeting was held the last two years.

Against allegations of tardy auditing, internal auditing has been completed for 2016-17, while auditing is underway for 2017-18.

No third party audit has taken place. A min-orities welfare department official said funds are released to TMREIS on a priority as it is a prestigious state government programme.

Nepotism is alleged in various procurements. Furniture costing Rs 22 crore has been purchased for these institutions, and big sums were also spent on lab equipment, workshops, etc.

The TMREIS vigilance wing has pointed out inconsistencies amounting to Rs 80,000 in payment to vendors for laundry and groceries in Barkas Residential School and College. The then Principal, Mr Mohiuddin, was found responsible.

Mohammed Abdul Akram, a social activist, said B. Shafiullah has been TMREIS Secretary since its inception; never a good idea, as it is vulnerable to vested interests. Certain residential schools were kept as model hostels, to be shown to VIPs for publicity gains. The situation in other hostels was bad, necessitating social auditing.

S.Q. Masood, an RTI activist, said the TMREIS bylaws were problematic for bypassing the mainstream system and giving power to the secretary to decide matters big and small, especially in procurement.

Advisor to government on minorities welfare, A.K. Khan, who is also the society president, said it had sought clarification from Shafiullah on the charges.

Shafiullah refuted the allegations, saying TMREIS followed procedures formulated by the government. Most procurement was from agencies like Kendriya Bhandar, HACA, SETWIN NSIC etc., via e- procurement. At the district level, a committee headed by the district collector fixed rates.

A writ petition was filed this year challenging the process, but it was dismissed with an observation that there was no error in the Society’s decision in restricting the tender process to source from government agencies. #KhabarLive