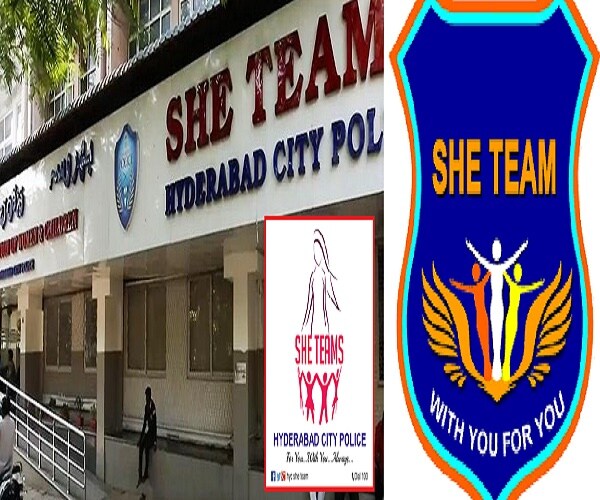 Almost five years have passed since the Telangana police introduced SHE teams, a programme meant exclusively to address violence against women. Pioneered by Swati Lakra, Inspector General for Women’s Safety for Telangana, in 2014, SHE teams in the state were the first of its kind in the country, intended to make the police more approachable for women, and to address women’s problems with empathy and confidentiality.

The programme, which was started in 2014 in Hyderabad alone, was replicated across Telangana in 2015 once it was successful. “Many states have come and seen the way we work and have taken back notes. They have started it under different names like Nirbhaya, Shakti, etc.,” Swati says.

To understand what has worked in the past five years and what gaps remain to be addressed, #KhabarLive spoke to SHE team members, activists and complainants to understand how the programme has worked and evolved in the urban and semi-urban areas of Rachakonda, Cyberabad and Hyderabad.

Responsive, approachable and sensitised
Speaking about the design of the programme, Swati says that one of the major problems it addresses is the discomfort and fear of judgement that women tend to feel when approaching the police.

“There was a perception that women think of the police as unapproachable when it came to such matters. That’s why we have ensured that SHE teams were not set up in a police station. We wanted it in a place where women don’t feel any stigma in talking to the police. A woman should not feel like people are judging her for what was happening to her,” she says.

In order to better handle complaints, SHE team members are trained in gender sensitisation and soft skills, Swati adds. “We tell them how to talk to the petitioners, how to make them feel comfortable, not to impose their own ideas on them, not to question them or judge them,” she adds.

Ekta Viiveck Verma, founder of Invisible Scars, an organisation that works with domestic violence victims, feels that the sensitisation programme plays an important role in addressing some of the patriarchal mindsets that all of us are ingrained with, which could result in victim-blaming behaviours.

The ‘She’ in SHE teams
As Swati points out, one of the unique features of SHE teams, apart from upholding the privacy and comfort of the complainant, was having women in every team. Every SHE team is mandated to have at least 2 female police constables. A team typically consists of 2 more male police constables and one team in-charge, an SI or ASI ranking officer who could be either male or female.

Swati asserts that while cases are verified to ensure that they’re genuine, “…what matters most is that when a petition comes in, it must be dealt with an open attitude, rather than with preconceived mistrust and blame, as is often the case when women open up about facing harassment.”

How it works
There are multiple ways to approach a SHE team, including direct walk-ins at the SHE team offices, complaints over WhatsApp, Facebook, Twitter, dialling 100, and even a dedicated app from the Telangana police called ‘Hawk Eye’. Once a complaint is received and assigned to the relevant SHE team based on the location, the officers contact the petitioner to set up a meeting to hear out her problems. This meeting is arranged entirely according to the petitioner’s convenience, including timing, location, and who can meet her.

Officers say that often women may not want to visit the police station or the SHE team office as they feel self-conscious or intimidated, or worry that someone may recognise them. “They may also not want to meet at their home, college or workplace, as they want to keep the matter confidential. We meet at a third location, wherever and whenever they want. Sometimes the petitioner will just sit in our vehicle and talk to a female constable in private, while the other officers wait at a distance,” says ASI Padma, who is in charge of the Rajendranagar SHE team in Cyberabad.

Counselling
On most Saturdays, the Rachakonda SHE team office is buzzing with activity, as several men accused of sexual harassment are brought in. They are not here for any brutal punishment, but for counselling sessions offered by psychologists and advocates in the presence of their family members.

In cases where the complainant already knows the abuser, particularly in cases of spousal violence, Ekta says that having Bharosa centres, which are NGO-run counselling centres that are a subset of SHE teams, really matters. “A lot of victims of partner violence do not want separation for different reasons. Counselling helps in dealing with many such cases,” she says.

Counselling sessions are repeated until there is a change in the harasser’s attitude, says Padma, adding that often counselling for men does prove to be a challenge. “Some of them have this careless attitude, they think who are these women to tell us what to do. Such people need more sessions to set their heads straight,” she says. “We have to explain the most basic things to them. ‘She used to like you earlier, so it was okay to pursue her. She doesn’t like you anymore so you have to stay away from her,’” she adds.

In the case of minor boys as well, multiple counselling sessions are conducted and parents are informed. “Parents should also be assisted in dealing with their adolescent children delicately, without antagonising them,” says Head Constable Subhadra from the LB Nagar SHE team.

Common cases
Head Constable Sharada from Vanasthalipuram says that most complaints her team gets are from women who are being harassed by their ex-boyfriends. “Often, a couple would’ve separated after being in a relationship in college. Eventually, the woman’s parents arrange a marriage for her. The ex-boyfriend will use text messages, photos or videos from the time they were together to blackmail her for money or sexual favours,” she says.

“In some cases, they’ve been in a sexual relationship with these men. They are so afraid about this information being revealed to their family or husbands that sometimes they are at a stage where they are contemplating suicide,” she says, explaining how they are trained to handle such sensitive cases and to absolutely avoid any form of victim-blaming.

Another common type of case is phone call harassment, says Subhadra. The cases are dealt with differently based on whether the harasser is a known or unknown person, depending on the complainant’s wishes. “If she is willing to compromise, the harasser is let go with a warning. Sometimes, the man is booked in a petty case and summoned to court to pay a fine. If she has suffered a lot and wants to file a complaint, then we do that,” Subhadra explains.

SHE team officers also assist the complainants by accompanying them to the Cyber Crime Police Station and helping them file a complaint.

Swati says that the newer versions of the training programmes are being designed to include components to equip officers to deal with simpler cyber crime cases like phone call harassment.

“Even if the problem is not of sexual harassment, but say financial, legal or land disputes where the woman is being harassed, we conduct inquiries and assist the women in filing a case,” Swati says.

Apart from responding to complaints and conducting decoy operations at places like malls, bus stops, colleges and other areas prone to incidents of street sexual harassment, SHE teams also conduct awareness programmes in schools and colleges where students are encouraged to seek help from SHE teams if they face harassment.

Impact and inclusivity
Some of the cases solved by SHE teams have even had a significant impact beyond basic police action. In Rachakonda alone, 65 child marriages have been prevented by SHE teams since their inception, says Karunakar Reddy, Vanasthalipuram SHE team in-charge.

“We believe the increase in the number of reported crimes is an indication that women feel safer about approaching the police now,” says Swati. “I think we are better off detecting more cases than burying them and having a false perception of safety. The feedback from women matters more,” she adds.

But not all the feedback has been positive. While Ekta says that in her experience, SHE teams have been immensely responsive and sensitive, Spurthi Kolipaka, a Hyderabad-based social worker, disagrees.

“It’s true that they instantly respond and that does make you feel assured. My case was handled by a male cop whose behaviour was intimidating,” says Spurthi. “He sent a recording of his interaction with my stalker, came and sat in my home and asked me if I would write an appreciation letter. I had to agree. My stalker then continued to call me, and only stopped after I blocked him repeatedly,” she says.

But the criticism is not limited to an occasional lapse. Rachana Mudraboyina, a Hyderabad-based transgender rights activist, talks about approaching the authorities in the inception stage to talk about involving trans people. “In 2014, there had been a spike in crimes against trans people. The Telangana state was formed and SHE teams were started in the same year that the NALSA judgement was passed. Yet, we couldn’t convince the police authorities to address violence against trans people at a policy level,” says Rachana.

While SHE teams have helped transwomen in a few odd cases, to have trans-oriented policies there needs to be political will which the leadership in the state lacks, she says.

Ekta commends the flexibility of the SHE teams which is helpful while handling complex issues of spousal violence. However, as she explains, domestic violence includes several other cases, including child abuse and abuse by in-laws and other relatives, in the domestic space. But the stigma associated with such incidents means that reporting remains low.

Talking about the need to involve more civilians in the programme, Ekta brings up the Margdarshak programme initiated by the Cyberabad police, where individuals from corporate organisations are trained and appointed as Margdarshaks, who act as facilitators for women in the organisation facing harassment and seeking intervention. The purview of a Margdarshak is not limited to their organisation, with civil society members like Ekta also being nominated. “Anyone who knows that I am a Margdarshak can approach me for help, and I have the means and training to support them through the process of filing a complaint,” Ekta explains.

However, implementing such programmes for increased accessibility to women from the working class and marginalised communities, especially in the unorganised labour force, remains a difficult problem.

As Rachana says, the programme still has a long way before it can be termed inclusive. “It operates only in the gender binary, leaving out trans women, intersex people, trans men who were assigned female at birth. It’s mainly cis women who are protected by the teams,” says Rachana. #KhabarLive

Malkapoor Village In Medak District To Have Only ‘One Ganesh Pandal’...

Why Botanical Survey Of India To Vacate Premises From Attapur To...

In CWC Meeting, A Minor Realises Sexual Abuse By Father And...